Chorley’s of Gloucestershire is to handle the sale of a private collection of Irish silver, which  has now been consigned and goes under the hammer on 26th January 2016.

Irish silver has always attracted collectors, both because it is scarcer than its English counterparts but also because it has its own unmistakable character. Irish silversmiths in the 18th Century  produced silver with a distinctive whimsical feel to it; this was partly because they were geographically isolated from fashions elsewhere.

The value of commodities is affected by availability and therefore it is provincial Irish silver that attracts the most attention.  The collection to be offered in January includes several pieces of Dublin silver however it will be the provincial pieces from Limerick and Cork that will attract the strongest bidding. 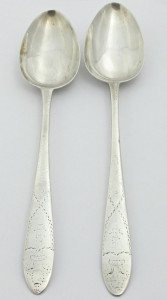 Highlights of the collection include a pair of Limerick table spoons by Maurice Fitzgerald, one of the well-known Fitzgerald family of silversmiths.  Dating from circa 1785 the spoons have the Prince of Wales feathers motif to the terminal which is a particular feature of Limerick silver at the time.  Perhaps as few as 10 pieces of Limerick silver come onto the open market every year and accordingly this pair of spoons is estimated to fetch £1,200-1,800. 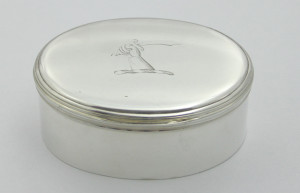 Among the Cork pieces is an oval tobacco box by John Hillery or John Humphreys dating to circa 1790.  This box is in good condition and the cover is engraved with the striking crest of the MacNamara family, estimate £1,000-1,500.

For new buyers looking to begin a collection there are several pieces that may appeal, for example a pair of sugar tongs with the typical elongated fiddle pattern found in Irish flatware.  These tongs are by John Whelply of Cork and carry a pre-sale estimate of £200-300.