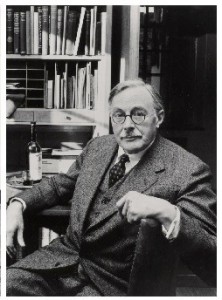 Sir Gordon Russell shaped the history of 20th century British design, bridging the gap from the Arts & Crafts movement to a Modern, minimalist aesthetic. Passionate about high standards of craftsmanship, he also accepted machinery as a means of reaching out to a wider market without compromising quality. This combination of functionality with design made Sir Gordon Russell a pioneer in creating furniture to suit modern life. His furniture company successfully adapted and modernised in the Second World War and post-war period, producing utilitarian items available to the masses, as well as bespoke pieces for special commissions.
The Gordon Russell furniture company received a number of commissions from high profile individuals. British Prime Minister David Lloyd George commissioned a Snowshill” chest of drawers to be made from a 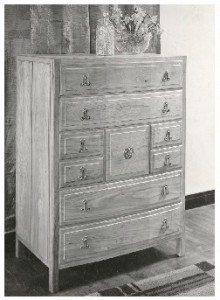 holly tree that had fallen in his garden. This original piece, with its distinctive central drawer designed to contain a top hat, will be exhibited at the BADA Fair. Another prominent commission for the company came from Her Majesty the Queen and the Duke of Edinburgh. The company created an occasional table displaying a map of the D-Day landings, which was presented to President Eisenhower during a state visit to the USA in 1957.
In addition, the company participated in large-scale projects to bring its modern designs to the public. In 1960 the Gordon Russell furniture company collaborated with Basil Spence, the architect of the new Coventry Cathedral to create chairs suitable for the space.
Required to be durable, to simulate pews, to stack and to link together, the design was revolutionary and hugely successful, with many of the original chairs still in use today. The design for these chairs was later used at Winchester, Wells, Southwark and Hereford Cathedrals and has recently gone back into production.
Another project that brought the company widespread recognition was a request from the 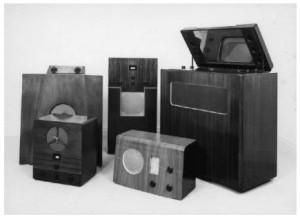 Murphy Radio Company to design radio cabinets for its growing business. This led to a remarkable series of designs and at the height of mass production in London, 800 people were employed in making thousands of cabinets, which are now recognised as design ‘icons’.
Perhaps some of the designs most personal to Gordon Russell were amongst the earliest he made, as they were influenced by his surroundings at Broadway and the Lygon Arms. In 1925 he was awarded a gold medal at the Paris Exhibition for a cabinet made of walnut, 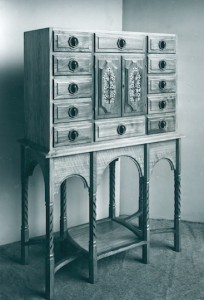 and delicately inlaid with ebony, yew, laburnum and boxwood. His early pieces such as this cabinet have unique labels with details of the craftsman, the date of production and the design reference. Not simply a designer of furniture, Russell was interested in many types of craft, as demonstrated by his design for an ornate oak leaf sconce in polished steel and brass. The Gordon Russell Design Museum has many of the original drawings for these designs, some of which will go on display at the BADA Fair.
During his lifetime Gordon Russell held positions as Chairman of the Utility Furniture Design Panel during the Second World War and later as Director of the Council of Industrial Design, as well as playing a leading role in organising the Festival of Britain (1951).
The Gordon Russell Furniture Company was awarded the Royal Warrant in 1939 and again in 1961. For his award-winning furniture and overall contribution to design, Gordon Russell was knighted in 1955. The former premises of the Gordon Russell furniture company in Broadway now houses the Gordon Russell Design Museum.
Ray Leigh, Design Director and former Chairman of Gordon Russell Ltd, will give a talk “By Hand and Machine – The Gordon Russell Legacy” on Thursday 10 March at the BADA Fair. He will also contribute an article on Sir Gordon Russell to The BADA Handbook, which is available to all ticket holders.