Online auction aggregator, Barnebys.com, has officially launched in the United States as the Swedish-based business opens its US headquarters in New York. 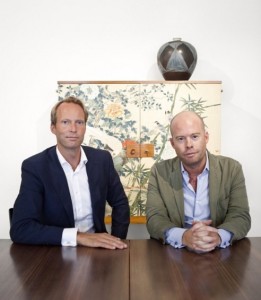 Barnebys representatives have actually been in the States for the past several months, introducing its business model to auction houses. On average, Barnebys attracts about 1.5 million visitors to its site each month, mostly in the countries where it is an established powerhouse: Europe, Scandinavia, Asia, Australia and elsewhere.

Now, it has set its sights on conquering America, where now only one percent of peoples’ assets in the homes are sold at auction each year. “That figure is low when compared to the rest of the world, but for the auction industry and the secondary market we see this figure increasing quickly to two percent and eventually five percent,” said Pontus Silfverstolpe (left), Barnebys’ co-founder and it Director of Content.

Silfverstolpe believes that today’s market for artwork, antiques and collectibles is fast becoming transparent and accessible to more and more people, thanks to websites like Barnebys, which showcases an entire range of auction houses in one place. Also, it’s free to bidders and buyers, with auction houses paying “per-click” to have their auctions listed.

“The auction industry is changing,” Silfverstolpe said. “It simply can’t continue to rest on its laurels and reputation from a bygone time. This is a new age, with new behaviors, and with them buyers who have changing demands. Today’s buyers don’t just collect, say, Baroque, Art Nouveau or Modern pieces. They have far more varied interests in different styles, eras, artists, patterns and materials.”

For that reason, he said, auction houses and dealers must keep ahead of market trends in order to attract new audiences – and retain the ever-evolving existing ones. “To meet customers’ needs is going to be crucial for traders who want to survive,” Silfverstolpe said. “It’s not enough to simply have a website. A modern auction house needs to have a viable digital strategy, one that drives new traffic to its site.”

While the bidders and buyers who flock to auctions are generally well-educated, upscale and goal-oriented, the major focus heading into 2016, not just in the U.S. but worldwide, will be the “lower” segment – objects not in the highest price bracket. “These items are what attract a broader audience,” Silfverstolpe said. “The challenge for auction houses is how to capture that market. We think they can.”