John Andrews is the Managing Editor of Antique Collecting magazine, a specialist in English antiques and the author of a number of books.

Despite the gloom permeating the rooms of some silver auctioneers, 2015 produced a strong finish to the year in London. Fluctuations in the price of silver ingot in recent years are said to have affected the market for antique silver in ways that bring rueful smiles to those involved in the trade. 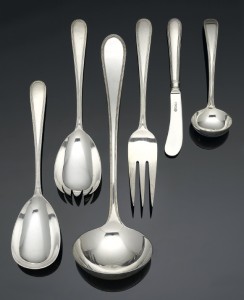 When the price was heading up towards £30 an ounce there were many routine silver teasets and other products of no great age that apparently fell prey to the appeal of scrap value. Paradoxically, now that the ingot price is bumping back down at around £8 per ounce, aesthetic appeal is reasserting itself in a grudging revival: sales are said to be affected once again by design and quality of manufacture. The ingot price misconception and material price reduction may have contributed to a late burst in high-quality silver artefacts as the end of the year loomed. Even so, signs of enthusiasm were subdued. A further complication to the structure of the market has been the development of the internet as a vehicle of promotion, bringing direct contact with potential customers for both dealer-retailers and auctioneers. There are now some comprehensive websites and portals that can look after buyers of all kinds of silver with ease.

It goes without saying that English silver has always had a high reputation, not just for the products of 18th-century craftsmen but also, as recorded on these pages in a 2012 article by John Andrew (not an abbreviation or misprint of your correspondent and Managing Editor’s name but a distinguished curator and author) in more recent post-1945 terms for the work of designer silversmiths who have brought recognition of a world centre of excellence to this country. This contemporary work does not come into the auction rooms with much frequency but it has a dedicated following and is a sector to watch.

In his Price Guide to Antique Silver, published by the Antique Collectors’ Club in the early 1980s, Peter Waldron advised the reader contemplating starting a silver collection not just to dream of how much money could be made, but to try to understand quality and design. Rueful smiles may be due once again at this good advice – especially in view of the claims about the effects of raw material price fluctuations – but Waldron wrote at a time of high inflation, which was expected to stay.

Collecting silver was one of the ways of protecting savings at that time. Much greater skill in assembling a collection would be needed to have the same effect now. What is more, the attraction of silver as a high-value, portable commodity led to its vulnerability to theft. Many owners prefer to lock away the family pieces in bank vaults rather than risk losing them. This is a great pity and it has contributed to the decline of formal eating practices. Nothing looks better than good practical silver on the table but nerves about theft and the decline of hand dishwashing have often pushed silver back into a decorative role or at worst led to its complete incarceration in safe places out of sight.

Despite these sombre considerations the end of 2015 saw some interesting and brisk developments in the sales of period silver at auction. In November 2014 Sotheby’s was proud of its exceptional sale of the silvergilt 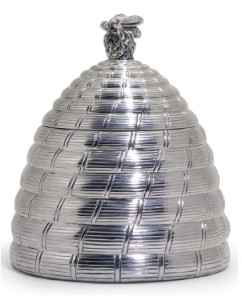 Paul Storr 1820 Warwick Vase on stand with its detachable vase of classic form and the stand incorporating a cast coat-of-arms and laurel leaf wreaths. The arms were those of the Duncombe family of nautical achievement and the price realised was £82,900. A year later, in November 2015 saw Sotheby’s include further silver pieces in its arts of Europe sale. While there were no pieces equal to the prestige of the Warwick Vase, a Victoria silver honey pot (right) by Edward Barnard & Sons of London, 1840, of bound, reeded skep form, (a skep is a straw or wicker beehive or basket) with detachable cover with stylised bee and flower finial fetched £9,375, which was more than £800 per ounce. Showing that traditional roles for silver still have appeal, a set of four George III silver candlesticks by Boulton & Fothergill – see fig 3 – fetched £31,250. And a George III two-handled silver soup tureen – see fig 4 – with cover, by Thomas Robins, fetched £11,250. Food would have to be good to enhance such valuable tableware.

Not to be left out, Christie’s sale entitled centuries of style on December 1 last year showed that silver is still capable of attracting avid enthusiasts. The Henry VIII silver gilt Apostle spoon of fig 5 with mark of William Simpson, London, 1531, fetched £25,000. A George 1 silver tazza with mark of Thomas Mason, London 1717, went for £16,250 (left) and a George III silver wine-cooler, collar and liner, mark of John Scofield, London 1792, went for £14,375 (right).

To emphasise the connection top-rate silver has with the landed gentry, the George III silver stirrup-cup, of fig 8, mark of Thomas Pitts, London 1771, went for £7,500, just to show how a swift nip of something warming could go well at the start of a hunt if imbibed from a suitable vessel.

December 9 saw a sale of British and Continental silver at Bonhams Knightsbridge, this time of more modest artefacts, including a silver castle top card case of 1838 by Nathaniel Mills of Birmingham, £2,750, an Edwardian art nouveau silver photograph frame by Docker & Burn Ltd of Birming ham, 1903, £1,125, and a pair of mid-18th century silver candlesticks which fetched £2,000.

But it was not only these varied artefacts at Bonhams that showed how funds are still available for attractive silver.

The sale also included some lots of what is now called silver flatware, on which Ian Pickford wrote Silver Flatware: English, Irish and Scottish a considerable reference book published by the Antique Collectors’ Club in 1983. At that time there were books on spoons and forks but flatware, a term for services of spoons and forks apparently coming from America, 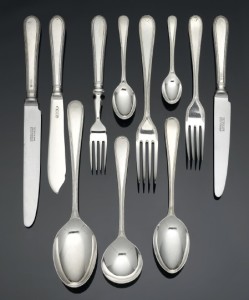 lacked a comprehensive study. So Ian filled the gap. Knives belonged to what is called cutlery.

In the foreword to the book, Richard Vander wrote that while it was possible to build up a ‘mixed set’ of flatware this was a ’dubious hobby’ and a good straight set, be it secondhand or antique, was a better buy in the long run. In other words the service – defined as 12 each of table and dessert spoons, ditto forks, plus 12 tea/coffee spoons – should not be made up of items of the same pattern but from different sources or periods. It should be ‘straight’ i.e. made at the same time by the same person or manufacturer. Due to the depredations of time, it is almost impossible to fulfil this stringent requirement and most people will content themselves with making up ‘mixed’ services of the same pattern. The stringent criteria were not met by the lots in the sale and there was a relatively modern collection of bead pattern flatware by Garrard with abundant quantities of different purpose implements that fetched £4,125 (left). 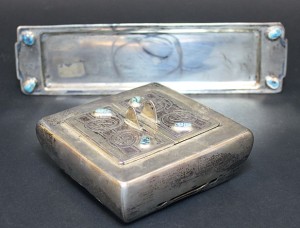 Other notable sales in November included a Liberty & Co Cymric silver and turquoise inlaid inkwell, hallmarked London 1902, sold by Moore, Allen & Innocent of Cirencester for £8,000 (right) similar to an Archibald Knox design of c.1899. Elsewhere, a silver and white metal clock designed by Margaret and Frances Macdonald of Glasgow School fame, contemporaries of Mackintosh, sold at Christie’s historical design sale of November 3rd 2016. The clock went for £182,500. In these cases the design element, rarity and provenance far outweighed the influence of any pesky silver ingot price. Which rather restores one’s faith in collecting the work of designers and high-quality antiques, whatever their raw material cost might be.