A rare painting by one of Glasgow’s most famous artists is returning to the city following an absence of 120 years. 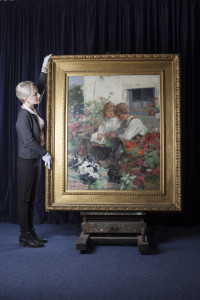 The oil on canvas, Siblings Feeding Rabbits, by David Fulton (1848 – 1930) was transported to Germany for a The Munich International Exhibition in 1894 and has remained overseas ever since.

Now the painting – which has been valued at between £8,000 and £12,000 – has returned to the artist’s home town where it will feature as one of the top lots in The Scottish Pictures Auction at McTear’s on 14th February.

Commenting on the auction, Brian Clements, Managing Director at McTear’s Auctioneers, said, “David Fulton is a true son of Glasgow and one of greatest artists to come out of the city in the past 200 hundred years. This painting is perhaps the artist’s finest work and it is fantastic to see it back in Glasgow after a break of 120 years.”

The 4ft by 3ft work will feature in The Scottish Pictures Auction at McTear’s in Glasgow on Sunday 14th February.