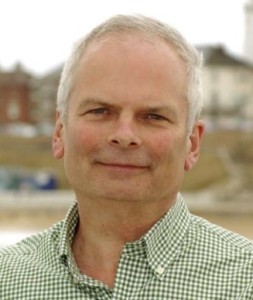 Geoffrey Munn is one of the experts of the BBC’s Antiques Roadshow and the managing director of the London jewellers Wartski; his specialisation is 19th-century precious metalwork and Fabergé. He is the author of several books including Tiaras a History of Splendour and Wartski the First One Hundred and Fifty Years both available at www.antiquecollectorsclub.com.

Tsar Nicholas II celebrated his last Easter close to a century ago in 1918. But, in the space of a few generations, the world has shifted on its axis. What has been gained in technology has been lost in religious faith and liturgical traditions.

Back then it was a society without television and radio and, mostly, without telephones and electric light. Entertainments were limited to banquets, balls, theatres, and country sports but the church, with its annual festivals, remained the focus of everyday life for everyone. This was a life illuminated not by the glow of the computer screen but by hobbies, books, hand-written letters and greetings cards. For many people there was much more available time, and to fill it a number of covert means of communication, based on historical precedent were revived and elaborated.

These included the language of flowers and the lore of the lapidary. By the early 1900s so many booklets had been published on the meaning of flowers that it is pointless to single out any one of them. While fewer concentrated on classifying the meaning of precious stones, in 1907 George Bratley published The Power of Gems and Charms and, in 1913, Frederick Kunz, vice president of Tiffany, tried to have the last word on an ancient tradition in his book The Curious Lore of Precious Stones.

More often than not, the lore of the lapidary paralleled the amatory meaning of flowers; for example the forget-me-not echoes the turquoise in standing for true love, and the rose mirrors the ruby in signifying the pleasure and pain of love, bringing to mind the blood of Christ.

After the guns of two World Wars finally fell silent it was not only capital cities that had been leveled but also society and many of its customs. Later modern electronic advances, including television and radio, completely obscured the artificial systems described above. Consequently it is necessary to examine them afresh before the meaning of some of Fabergé’s work is fully understood.

At the close of the 19th century the allusions referred to above were a godsend to the international jewellery trade and were enthusiastically exploited. In New York Tiffany was their greatest exponent, but Cartier and Boucheron in Paris, Garrard, Hancocks and Giuliano in London, and Bolin and Fabergé in Russia were also keen advocates. Indeed the Fabergé’s record books from the Holmström workshop abound with related material. However it was not only in Fabergé’s jewellery but in the famous eggs that the covert meaning of flowers and gemstones can be decoded.

Setting aside the meaning of the Clover Egg for a moment, let us consider the unusual way in which it is made. The enameling techniques used to construct the openwork shell of the Egg were virtually unprecedented at Fabergé and take the form of a delicate tracery of overlapping trefoils in plique-à-jour enamel interspersed with others entirely set with diamonds. Plique-à-jour, sometimes known as transparent enamel, is sometimes said to have been invented in the late 19th century but, in fact, a simple form of it was made in 8th-century France. Undoubtedly this technically-demanding technique gained momentum in Japan in the 19th century where it had evolved as an extension of cloisonné enamel. However, in Paris Fabergé’s contemporaries took the process to new heights of expertise and inspiration. At the L’Exposition Universelle in Paris in 1900, where Carl Fabergé was a member of the jury, plique-à-jour enamel was shown by a number of jewellers including Lalique and Fouquet and was greatly admired.

With the challenge of inventing an original and witty design for the Easter egg intended for 1902, it is likely that the art nouveau jewellery at the exposition fertilised Fabergé’s concept of an egg arranged as a posy of clover, laced together with a meandering ribbon of blood-red calibre rubies.

Like the majority of imperial Easter eggs it originally contained a surprise; in this case a quatrefoil jewel with apertures for miniatures, presumably likenesses of the Grand Duchesses. An undated design of a jewel of this form survives in the Homström archives.

To scholars of imperial Easter eggs it is not only the unique application of plique à-jour enamel that makes the 1902 Clover Egg such an enigmatic object but also its meaning; a meaning that goes well beyond the simply decorative. Owing to its heart-shaped leaves, all varieties of clover have associations with luck and love and appear in aspects of decorative art as disparate as jewellery and raffle tickets.

Consequently it has been suggested, in The Fabergé Imperial Easter Eggs (Christie’s 1997), that the choice of clover was an allusion to Tsar Nicholas’s luck in love with his bride, the mother of his four daughters. In reality, however, the tsar’s luck had not extended to a long-awaited male heir so such a specific reference would be tempting fate and, therefore, can be challenged. Despite its rich decoration, this remarkable object is first and foremost an Easter egg. The symbolism of the clover, with its blood-red rubies, is likely to run much deeper than the Victorian convention of ‘luck in love’, into the realm Christian mythology.

Common clover has just three heart-shaped leaves and, as a trefoil, is an ancient emblem of the Trinity. This alone might have been perfectly suited to the design of an Easter egg but one species, the Calvary clover (Medicago echinus), has a special relationship with the crucifixion. Because it grew beneath the cross, it is said to have been streaked with Christ’s blood. Owing to its close association with the Passion, convent gardeners believed clover would never germinate unless planted on Good Friday; a superstition endorsed by the seedpod of Calvary clover which, unfurled, resembles the crown of thorns.

The folklore of all the clovers is very ancient. Some herbalists believed that it sprang up along the path of Pontius Pilate when he went to Calvary to see that the sign “Jesus of Nazareth, King of the Jews” was properly affixed to the top of the cross. As early as the 4th century Julian the Apostate (332-363) wrote that each of the leaves of the clover had, in his time, three white crosses and that the larger of the central crosses was always the last to fade. In the second half of the 19th century a good deal of the visual vocabulary of Easter was broadcast in printed ephemera.

Indeed the Tsarina’s grandfather Prince Albert, consort of Queen Victoria, brought the concept of greetings cards from Germany to the United Kingdom in the 1840s. Consequently Easter cards became popular throughout the royal houses of Europe as a vehicle for the proliferation of autographs. Unsurprisingly the Empress Alexandra was an enthusiast and sometimes painted them herself. When royal duties encroached on her time she sent commercially available reproductions instead. One card in particular, printed in Germany in about 1900, seems to have a particular resonance with the Clover Egg. Indeed, there is strong visual evidence that Easter cards influenced not only Fabergé but his imperial clientele in the making of not just the Clover Egg but several other imperial Easter eggs. 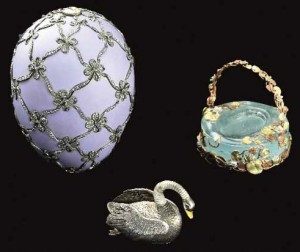 Like so much of Fabergé’s work, the full significance of the Swan Egg (right), a gift from Tsar Nicholas II to his mother the Dowager Empress Marie, has yet to be realised. The romantic concept of the swan song heralding the death of the beautiful white bird originated in the 3rd century BC, and has been continually reinterpreted. References appear in the writings of Euripides, Virgil, Ovid, Chaucer, Shakespeare and notably Tennyson in his poem of 1893, The Dying Swan.

Seven years earlier in 1886, the French composer Camille Saint-Saëns published Le Carnival des Animaux in which the dying swan plays an important part. A short ballet of the same title, choreographed in 1905 by Mikhail Fokine and performed by Anna Pavlova, derived from Saint-Saëns’ work.

Fokine’s The Dying Swan was first performed on December 22, 1905 – just too late to have inspired Fabergé’s Swan Egg, which was delivered months later at Easter 1906. And, while it reflects the influence of Tennyson’s poem, it means we have to search elsewhere for the aesthetic ancestry of this remarkable object. In Christian lore the swan, singing its dying breath, denotes Jesus’s last cries to God from the cross and, by extension, all Christian martyrs. These attributes were perfectly suited to any Easter egg, even the most extravagant of those made by Fabergé.

Although the mechanical concept of the Swan Egg has been given to James Cox (c. 1723-1800), its aesthetic ancestry is likely to be composite. Enameled pale purple – the colour of religious devotion – and set with diamonds, the emblems of constancy, the Swan Egg may, in fact, have been partially inspired by a popular Easter card of the time.

Until now we have associated the majority of the imperial Easter eggs with the revived decorative schemes that characterise a good proportion of Fabergé’s work. However some were clearly hatched from a more egalitarian tradition, now all but forgotten. It is an equally fascinating and contradictory concept that the humble Easter cards sent by emperor and commoner alike have been transmuted, through Fabergé’s alchemy, into some of the most opulent and improbable objects ever made by man.

Even the richly-decorated Basket of Flowers Egg of 1901 and the Kelch Apple Blossom Egg of the same year seem to owe a good deal to a type humble Easter cards. Lillies of the valley, linked with the seasonal sense of rebirth and renewal, are always an emblem of the return to happiness. On several 19th-century Russian Easter cards the delicate, highly scented flowers appear against a pink egg that immediately evokes Fabergé’s famous Lilly of the Valley Egg where a profusion of pearls, attributes of Venus, endorse their covert message of love revived.

In the language of flowers the pansy (penseé in French) means ‘think of the giver’ and, flowering throughout the winter, it too is a favourite emblem for Easter greetings cards. In jewellery design it usually appears with diamonds, for constancy, and then the message is extended to ‘always think of the giver’. This is the unequivocal message of the Pansy Egg of 1899; a message endorsed by the heart-shaped frame housed within which is decorated with the lamps of love and garlands of roses for Venus (left).

Another common device on Easter cards across Europe in the 19th century is the chariot brimful of seasonal references. One in particular, loaded with a garlanded egg and drawn by angels evokes what little we know of the missing Chariot Egg of 1888.