An unique trophy and player’s award both presented to Stoke Ladies Football Club in Barcelona in 1923 following the team’s victory over a French team is to be sold by Cheshire auctioneers, Peter Wilson this month.

Life was tough in the 1920s for lady footballers, and despite matches for war charities being tolerated during the First World War, in 1921 the Football Association banned women from playing in the UK, deeming the sport to be “unsuitable for females”.

Teams like Stoke United – Stoke Ladies Football Club – were forced to play on rugby pitches or other non-affiliated grounds, while games overseas were opportunities too good to miss.

The commemorative trophy and figurine have both been consigned to the sale by Keith Bridgett, grandson of the founder of Stoke United, Leonard Bridgett. 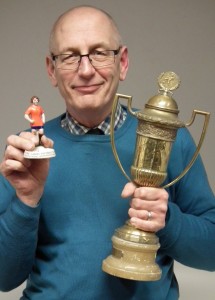 Peter Wilson sporting memorabilia specialist Nick Allsop (right) describes the two rare objects as being of, “significant importance to the social history of football in relation to participation by women”.

A Longton Art China figurine, believed to have been presented to each player in the winning side by the pottery owner Edwin Leadbeater, is estimated at £200-300.

The 14cm (5.5inch) figurine shows a standing lady footballer wearing an orange shirt, blue shorts and brown socks with a ball at her feet. The base is inscribed “Winner English Cup 1922 International Barcelona 1923” while the dished interior is decorated with the Stoke City crest.

Extensive research by Patrick Brennan shows that the businessman and entrepreneur Leonard Bridgett was born in 1878 in Forsbrook, Staffs. Himself an athlete and a player with Burslem Park, Trentham and Stoke Reserves, he helped reform Stoke City FC in 1908, and was a director of the club for seven years. He also served on the borough council for 15 years.

In early 1921, a photograph appeared in the Stoke Weekly Sentinel with the caption “Len Bridgett’s team, Hanford Ladies.” The same photograph was later released as a postcard with the title “Stoke-on-Trent Football Team”, although the side came to be known as Stoke United.

The team had two harsh early encounters with the legendary Dick, Kerr Ladies, a works team from the Dick, Kerr & Co, manufacturers of locomotives and tramcars in Preston, which drew a large number of spectators. One ended in a 12-0 victory for the visitors, while two players were sent off for fighting in the second, which Stoke lost 2-0.

In September 1923, two years after the FA ban, Bridgett arranged for Stoke Ladies to visit Barcelona to play two games against Les Sportives of Paris, the Stoke side winning both. The match was in aid of the “Cooperativa de Casas Baratas”, an organisation for the construction of cheap housing, which was backed by the Journalists’ Union.

Later that month, and billed as the holders of the English Ladies’ Football Association Cup and the International Cup, Stoke avenged their defeats at the hands of the Preston ladies, winning by a single goal in a match played at Colne in Lancashire. Donmouth believes this was the last outing for Stoke Ladies FC.