Brian King has spent a lifetime either thinking of, or actually building, model boats, his motto: ‘Never think you can’t achieve something’. Now aged 90, the models that won him gold medals and international acclaim – proof that his maxim is true – are to be sold.

The Brian King Collection, a lifetime’s devotion to the hobby, comprises 18 highly complex ship models, almost all in custom-made cases, ranging from Victorian battleships to the USS Arizona, sunk by the Japanese at Pearl Harbour. They will be offered by Ewbank’s, Surrey and Hampshire’s leading fine art and antiques auctioneers in the firm’s fine sale on March 17 and are expected to raise a total of around £20,000.

Water and things that float have always fascinated Brian King. “I remember being taken by my grandmamma to Abington Park in Northampton when, I was very small, certainly pre-school, and seeing the modern boating lake there,” he said.

“It was an uphill approach so that suddenly the whole shining water surface appeared at eye level with sundry model boats sailing about. That magic moment stays with me, as does the canoe lake at Southsea where in 1935 I saw for the first time a large steam driven warship in action.”

He was drawn to model-making after being taken to an exhibition as a young man and thought he could make models at least as good as those on display. “I put a couple [of model boats] in the exhibition the following year and won two awards. That lit the touch paper,” he said.

His first model, a Second World War Royal Navy Algerine Class minesweeper, one of the 110 ships launched between 1942 and 1944, won him a silver medal at the exhibition. It is estimated at £500-1,000 in Ewbank’s sale.

Among the most impressive models of Second Word War battleships is HMS Belfast, which saw action at the Battle of the North Cape, during which she helped in the sinking of the German battle-cruiser Scharnhorst, as well as protecting the Artic convoys and taking a major role during the D-Day landings, now a museum ship moored by London Bridge.

Shown following her 1959 refit, Brian’s model won a gold medal and the Mountbatten Award at the London Model Engineering Exhibition (MEE); the David Owen Cup, and Best in Show at Ellesmere Port, all in 1992; Best in Show at Windermere in 1993 and the Thysbart Trophy at Ellesmere Port in 1994. The model is estimated at £1,500-2,500, as is HMS Queen Elizabeth, one of the first super-dreadnought battleships to be powered by oil instead of coal, launched at Portsmouth in 1913. The model won the HMS Gold Medal and Mountbatten Award at MEE 1994 and the Silver Medal at Naviga at Mons in 2000. 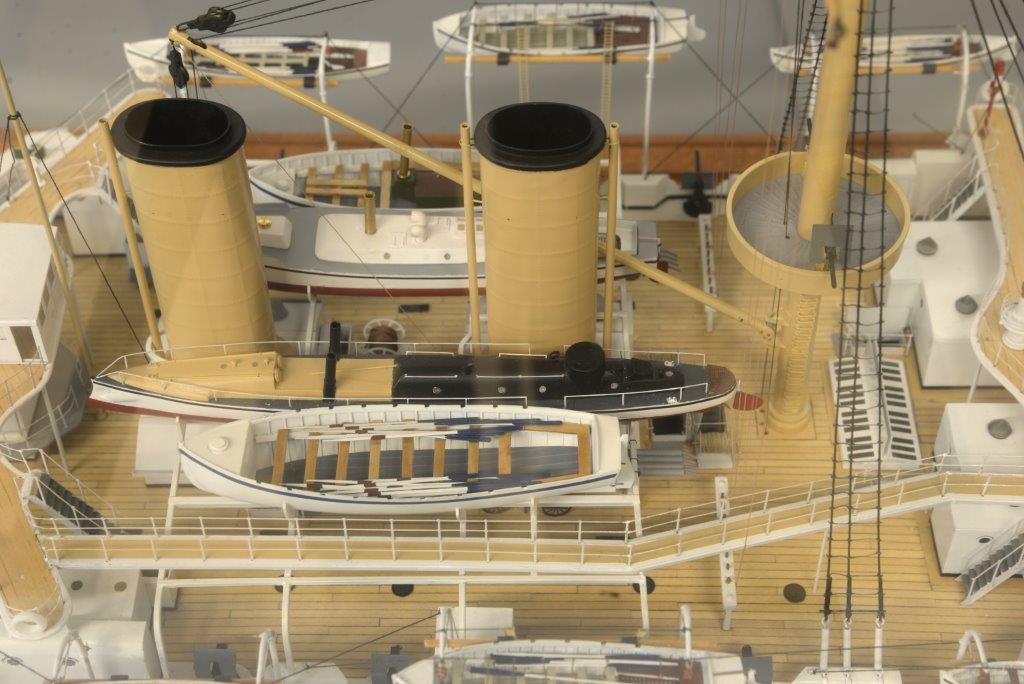 Earliest of the ships in the collection is HMS Speedy, a six-gun cutter launched at Pembroke in 1828. A gold medal winner at the 58th MEE, she is estimated at £400-600, while a waterline model of the ironclad battleship HMS Colossus, built at the Royal Naval dockyard, Portsmouth and launched in 1882, is estimated at £800-1,200.

A waterline model of HMS Camperdown won a gold medal and the Earl Mountbatten Award at the MEE in 2003. Like most of the others, it had taken Brian two years to build.

Camperdown was an Admiral-class battleship launched at Portsmouth in 1885. In 1893, during manoeuvres off Tripoli, she collided with and sank the battleship HMS Victoria killing 358 including the commander of the British Mediterranean Fleet, Vice-Admiral Sir George Tryon.

The model is estimated at £800-1,200, while a model of Victoria, built at Elswick in 1887 and named to commemorate Queen Victoria’s Golden Jubilee, is estimated at £1,500-2,500. This model won gold medals at both the Naviga World Championship at Rouen and the MEE and the Earl Mountbatten Award in 1987.

Gold medals and the Mountbatten Award were also won at the MEE in 1984 and Rouen in 1987 for a model of HMS Empress of India (1891) a pre-Dreadnought Royal Sovereign battleship, laid down at Pembroke and completed at Chatham.

She saw active service with the Mediterranean Fleet and as the flagship of the second-in-command of the Channel Fleet before being sunk as a target ship in Lyme Bay in 1913. The model is estimated at £1,500-2,500.

Representing the French Navy is another pre-Dreadnought battleship, the Bouvet, launched in 1896 and sunk by a mine in 1915 during the Battle of the Dardanelles in the Gallipoli campaign. It won a gold and the Mountbatten Award at MEE in 2010 and is estimated at £1,000-2,000. 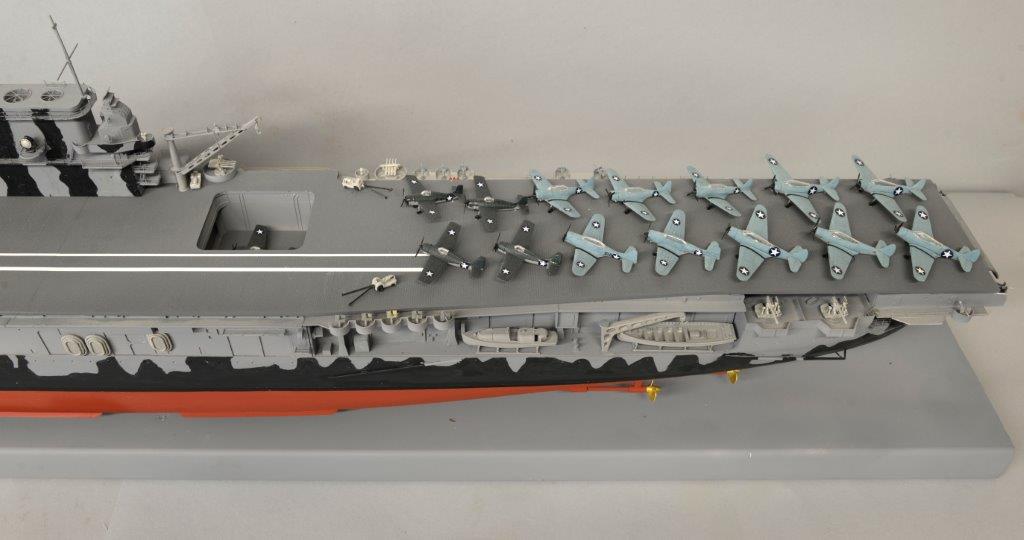 Among the most iconic is a model of USS Arizona, launched in 1915 and sunk at Pearl Harbour in 1941, an action that brought America into the conflict. After a direct hit from a bomb dropped from a Japanese plane, she exploded and sank with the loss of 1,177 crew.

Built by Brian from a Trumpeter kit in 2012, the model is estimated at £300-500, as is a model of USS Hornet, an aircraft carrier launched in December 1940 and sunk just a year and six days later by enemy destroyers after seeing action in the Battle of Midway and Guadalcanal. Brian completed the model in 2014. 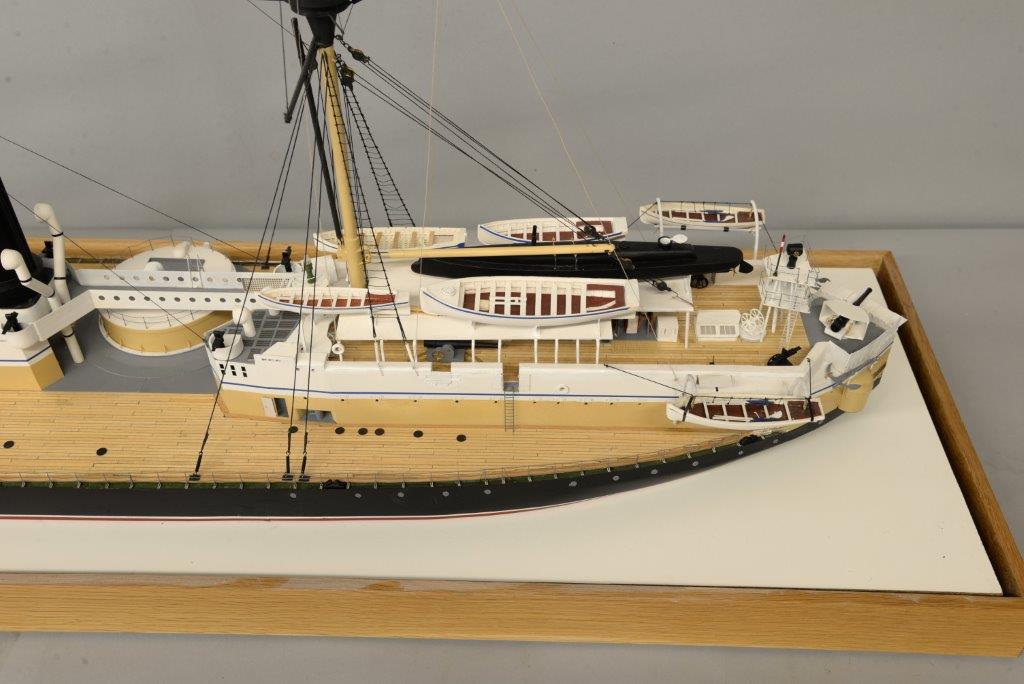 Brian King was born in Northampton, his father being an engineer and draughtsman, while his mother’s family were master carpenters. After securing a trade scholarship, he was educated at Twickenham Junior Technical School, subsequently serving an indentured five-year craft apprenticeship from 1942-47 with Lagonda Cars. His time there coincided with the time the great W.O. Bentley was chief designer there, although being the war years, the company was engaged in essential war work and jobs were protected professions.

He was later employed as a draughtsman for a gear-cutting firm and prior to his retirement at 60, he was a lecturer in engineering for 20 years at Carshalton Technical College. 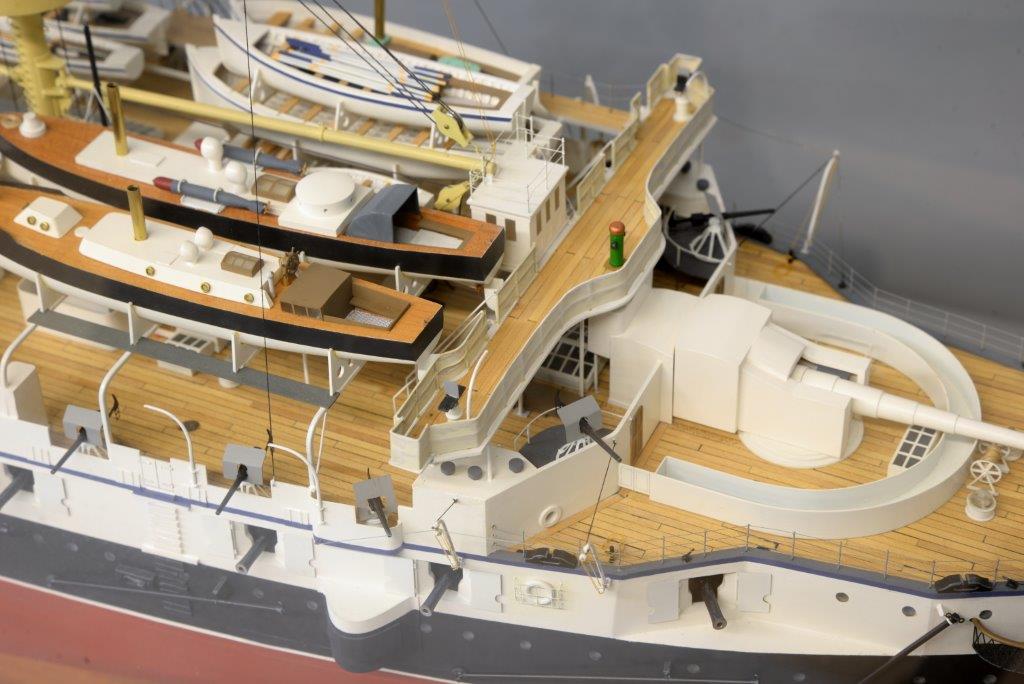 Always keen to pass on his knowledge to other model-builders, he wrote six acclaimed books on the subject and has written regularly for the specialist hobby magazine Model Boats. His writing covers both the philosophy of model-making as well as the advanced techniques that enabled him to construct the astonishingly complicated and detailed scale models now consigned for sale.

Brian once built a full-sized sailing dinghy but sold it “because it kept chucking me into the water and I didn’t like getting wet”. In all the years he has spent building model boats, he only ever sold one and regretted doing so ever since.

Still sprightly and with a mind that remains as sharp as a tack, he has decided it is time to part with his collection so that others can have the opportunity of appreciating it as much as he has.