Ahead of next month’s BADA fair, which presents a loan exhibition of the Cotswold School’s Gordon Russell, Antique Collecting explores the designer’s landmark furniture. 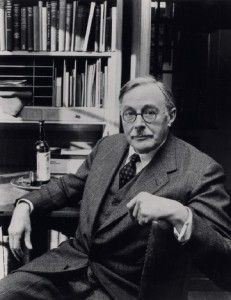 Sir Gordon Russell shaped the history of 20th-century British design, bridging the gap from the arts and crafts movement to a modern, minimalist aesthetic. Passionate about high standards of craftsmanship, he also accepted machinery as a means of reaching out to a wider market without compromising quality.

This combination of functionality with design made Sir Gordon Russell a pioneer in creating furniture to suit modern life. After WWII his furniture company successfully adapted and modernised to produce utilitarian items available to the masses, as well as bespoke pieces for special commissions.

The Gordon Russell furniture company received a number of commissions from high profile individuals, such as a ‘Snowshill’ chest of drawers commissioned by Prime Minister David Lloyd
George to be made from a holly tree that had fallen in his garden. The piece includes a distinctive central drawer, which was designed to contain a top hat. Another prominent commission for the company came from Her Majesty the Queen and the Duke of Edinburgh. The company created an occasional table displaying a map of the D-Day landings, which was presented to President Eisenhower during a state visit to the USA in 1957.

In addition, the company participated in large-scale projects to bring its modern designs to the public. In 1960 the Gordon Russell furniture company collaborated with Basil Spence, the architect of the new Coventry Cathedral to create chairs suitable for the space. Required to be durable, to simulate pews, to stack and to
link together, the design was revolutionary and hugely successful, with many of the original chairs still in use today. The design for these chairs was later used at Winchester, Wells, Southwark and Hereford Cathedrals and has recently gone back into production.

Gordon Russell (1892-1980) was born in Cricklewood, North London, in a small, semi-rural cottage but his bank clerk father soon moved to a house in Tooting Bec Road.

Through an accounting connection with the brewers Allsopp’s, his father then left the bank and moved to Repton, near Burton-on-Trent. Travel for the company brought him to the neglected Lygon Arms in Broadway in the Cotswolds, which he bought from the brewers despite having no catering experience. His concept for the hotel, based on a country house principle, and realising the merits of the tourist trade with diverse interests, was original for its time. Thus Gordon Russell came to the Cotswolds and was sent to school in Chipping Camden.

His enterprising father soon had a number of associated businesses running from the Lygon Arms. One of these was in antiques. On leaving school, Gordon Russell was not only general factotum around the hotel but also, more importantly, he became an antique dealer with particular responsibility for the furniture repair
workshops, where he was quick to learn and to use his own hands. He was intrigued by local stonemasonry and building methods, with his father constructing various additions to the hotel. He got to know a great deal about antique furniture, having a particular liking for the 17th century. The colourful but shrewd dealers he met while travelling on buying expeditions taught him a lot about the furniture trade.

By 1911 he started to make new designs influenced by the Cotswold School, particularly the designer Ernest Gimson. The Great War interrupted all this and he served in the ranks, rising to Quarter master Sergeant,

before being commissioned as an officer. He saw much intensely dangerous active service at Ypres, the Somme and Passchendaele but never doubted he would return. He was awarded the Military Cross before being badly wounded in the arm in 1918.

On his return, he had changed from a diffident, but observant, son into an efficient organiser and a sympathetic employer of men.
The antique furniture business continued – the celebrated Bill Keil became its manager at one time – but, after a long negative experience, Russell was impatient to design and create new furniture to good standards. An exhibition in Cheltenham in 1923 was successful and he was asked to design a café for display at the Victoria & Albert Museum before exhibiting at Wembley in 1924.

At first the firm made hand-crafted pieces very much in emulation of Gimson, winning prizes for good cabinet-making, but the mechanically-minded and practical Russell was no arts and crafts isolationist. From his youth he had been keen on mechanical drawings and engravings, with the Bassett-Lowke model locomotive catalogue a particular pleasure. He started to introduce some machinery to replicate certain parts. Rush-seated chairs were a standard item and steel firedogs and brassware were made. In 1924 W.H. ‘Curly’ Russell, no relation, started as a cabinet-maker and eventually progressed to chief designer, producing successful work for the firm.

From 1927 Gordon Russell’s younger brother Dick trained as an architect to relieve Gordon from the drawing board by 1930. Eventually Russell & Sons became Russell Workshops, and then Gordon Russell Ltd. The firm had a better understanding of marketing and branding than other Cotswold producers and the hotel’s grasp of the tourist trade gave the firm a different perspective. Through the Design and Industries Association, Russell came to know everyone of talent and influence across the whole field of design and benefited from such friendships and contacts.

The antique furniture business was closed after the Wall Street crash of 1930, its manager then setting up H.W. Keil of Broadway with immense success. The firm continued to make high-quality domestic furniture, developing its own style, with Dick Russell designing simple pieces with flush surfaces for small-scale machine production that presaged Modernist design.

This caused misgivings amongst traditional Cotswold handcraftsmen because the public could not always distinguish between hand-made and hand-finished pieces. The firm went into mass production of radio cabinets, initially for Murphy Radios, but also for Pye, Ultra, Ekco and others, setting up a new factory at Park Royal, near Willesden, London. They also designed and produced for schools, hotels and public buildings.

Gordon Russell shops in Wigmore Street, London, and Broadway exhibited contemporary work; Nikolaus Pevsner, the architectural historian, became a Russell buyer of textiles, glass and rugs. Gordon Russell understood the media and lectured widely as well as writing articles on the merits of good design. His name was always to the front when good modern design was discussed and when evangelism was needed.

In 1942 Gordon Russell was asked by the President of the Board of Trade, Dr. Hugh Dalton, to sit on a committee advising on the introduction of Utility furniture. This would be made available to certain categories of people – those recently married, bombed out etc. – who could prove a need. The work of two men, H.J. Cutler and Edwin Clinch, both of High Wycombe, was chosen out of a list of candidates, but Gordon Russell, as design consultant to the committee, was highly influential. Thus, the simplicity of a derived Cotswold style was made available on a mass scale.

It was not the last time Russell’s services were required for similar committees. He was involved subsequently
with the Council for Industrial Design, the Design Centre, the Festival of Britain, the Arts Council, the Railways Board Design Panel, the Banknote Design Committee, the Royal College of Art, the International Wool Secretariat (which produced the Woolmark), was Master of the Art-Workers’ Guild, served on the Fine Arts Committee of the British Council and many other posts; he was knighted in 1955. His brother Dick became Professor R.D. Russell, Professor of Furniture Design at the Royal College of Art.

Gordon Russell Furniture continues to this day but as a contract office furnituremaker. The contribution the firm made to Cotswolds furniture development was immense, taking the arts and crafts tradition on into the modern world despite an innate conservatism in many of its designs. The outlook Gordon Russell brought to the production of new furniture was not the same as most of the workshop-based craftsmen who were the pioneers of the Cotswold School, but he did more to promote an understanding of good design and its relation to domestic furniture than any of them.

Some of the extracts in this article are taken from Arts and Crafts Furniture by John Andrews.

Philip Allwood is a partner at the Cirencester-based auctioneers Moore Allen & Innocent, close to Gordon Russell’s base in Broadway.

“They say that when you go on holiday you should eat and drink where the locals dine. The same could be said for buying antiques: when an auctioneer is writing from a desk designed and manufactured by Gordon Russell – as I am – you know you’re on to a winner. 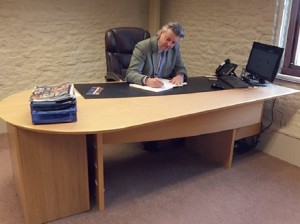 Gordon Russell lived and worked in the Cotswolds – just up the road from us in Broadway – so I guess you could say we are his local auction house. Certainly we get a fair amount of good quality Gordon Russell furniture through our doors, especially as a lot of bespoke furniture was made to order for well-to-do local families.
What interests me most about Gordon Russell is that the company straddles two camps. Early furniture, from the 1920s to 1940s, is of typical arts and crafts design for which the Cotswolds is rightly renowned.

Early pieces with paper labels create a lot of excitement here. They contain information like who made the piece, what wood was used, when it was started, and when it was finished. About a decade ago we had a beautiful Cuban mahogany dressing table mirror with box base, which we knew had been made by T. Leaze in 1926, thanks to the label.

And just last year we sold a lovely 1930s chestnut coffer with plain plank top, which was made for a local couple by Russell himself, as a wedding present. After the war, Russell was clearly inspired by the simple form and practicality of Scandinavian modernism, and later furniture – like the famous stacking oak chairs the firm
designed for Coventry Cathedral – follows that design ethic.

Recently we sold a mahogany and rosewood dining table with six chairs, dated May 1965. We also had a terrific
boardroom table and eight chairs pass through the saleroom. Gordon Russell pieces are extremely well made. Even the Utility pieces he developed during the war as chairman of the government’s Utility Furniture Design Panel are extremely well constructed, and still holding together today.

The good news for owners of his old and newer pieces is that both are in constant demand, and realise good prices at auction. An investment in Gordon Russell furniture is just that: values are appreciating, and I can’t see that trend being reversed any time soon.”