Summers Place Auctions in West Sussex is to sell The Barker Collection of fine taxidermy next month. The collection includes about 80 lots by some of the best Victorian taxidermists, but also some later works. Estimates range from £50 to £1,500, and the auction will be part of the live auction on Tuesday, 5th April 2016. 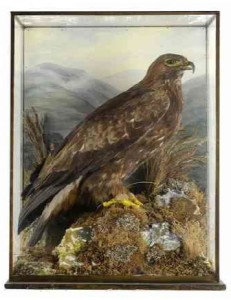 The taxidermy was collected by a real enthusiast in the 1970s, when he bought two old collections and added a few more pieces to them. As with many collections, it got slightly forgotten over the years as the pieces were all nicely stored in one of the rooms in the house. Until recently, when the current owner was reminded of his collection and realising that taxidermy is back in fashion, he thought that the collection should probably be on view again and find new owners who appreciate them as much as he did almost fifty years ago.

Errol Fuller, Summers Place Auctions’ natural history specialist, says, “The collection is really quite wonderful and includes some fantastic examples of early Victorian taxidermy. Mainly from Hibbs, who was based in the Midlands, and Leadbeater, a first class taxidermist who worked from Golden Square, London. It also includes a stunning piece by the most famous taxidermist – Rowland Ward.” 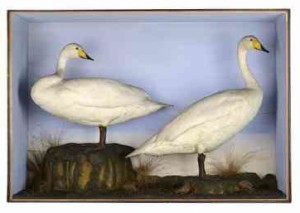 Highlights of the collection include a case of various species of Harrier by Hibbs of Ollerton, which is late 19th century and almost one metre high and over one metre wide. It is estimated to fetch £1,000 – £1,500. A case of three Buzzards by the same taxidermist from that period and of a similar size, carries the same estimate as does a case of various Kestrels and Merlins with full data on reverse from 1894. An impressive case of Whooper Swans made in the same studio but over one metre high and almost 150 cm wide is estimated to sell for £800- £1,200. But there also some lots by the same taxidermist which are available at the lower end like for example a case of an assortment of Warblers, including a Blue Throated, a Nightingale and Robin and several small British birds from 1892 – 1894, which is estimated at £200 – £300. 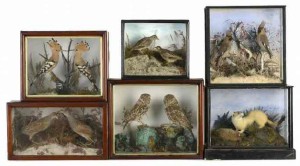 The Leadbeater of London lots are also in the region of £200 – £300, including two pairs of Geese, one of those lots Egyptian ones, but both from circa 1850. Rowland Ward (1848–1912) was one of the most celebrated taxidermists and he catered for the rich and famous from his Piccadilly premises. This sale includes a wonderful Kestrel in an all-glass case by
him from circa 1920, which is estimated at £300 – £500.

Rupert van der Werff of Summers Place Auctions says, “We are delighted to be able to offer this collection, it is a rare opportunity to buy some good quality Victorian taxidermy at reasonable prices. It was rather thrilling to be lead into a room full of forgotten masterpieces from the heyday of taxidermy.”