As long ago as 1949 when the jade, known as the Atterbury buffalo after one of its previous owners, was sold by E.W.L.Atterbury, it was described as ‘magnificent’ and ‘important’. 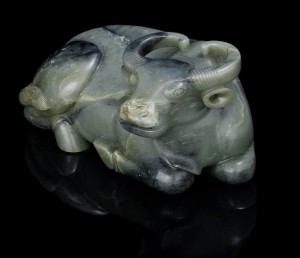 It is likely that it was originally made for a Chinese Imperial Palace. There are very similar examples in the Fitzwilliam Museum in Cambridge and the British Museum that have well documented Imperial provenances.

It is extremely rare to find animals of such striking size, and exceptionally large jade animals – more than 12 inches long – form a very select and unusual group within the tradition of Chinese jade carving.

The buffalo has long featured in Chinese art, reflecting its agricultural importance and its significance as a sacrificial animal. Buffaloes are also recorded as having an important role in certain imperial ceremonies during the Ming and Qing dynasties, particularly in Beijing in the third lunar month, when the emperor personally ploughed three furrows within the grounds of the Temple of Agriculture and made sacrifices to mark the beginning of the agricultural year and ensure a good harvest.

The sale at Bonhams also features items from the famous Cunliffe collection, formed by the second Lord Cunliffe over two decades from the mid-1940s. Highlights of the collection include a rare silver-inlaid bronze ‘champion’ vase Song/Ming Dynasty (£20,000-30,000).  Inspired by archaic bronze vessels produced during the Western Han period, this vase encapsulates a highly auspicious symbolism conveyed by the combination of eagle, ying and bear, xiong, which form the rebus for ‘champion and hero’.

Elsewhere a rare underglaze-blue yellow-ground ‘gardenia’ saucer dish, Zhengde six-character mark and of the period (£20,000-25,000) is also expected to generate interest. Dishes depicting gardenia designs in cobalt blue on a yellow ground were produced from the Xuande through to the Jiajing reigns. Examples dating to the Zhengde period, however, are very rare.

A rare imperial famille rose ‘Chilong’ bottle vase Qianlong seal mark and of the period (£50,000-80,000) is particularly fine. Incorporating Western techniques and Chinese traditional designs, the present vase is a remarkable example of the ability of craftsmen during the Qianlong period. It also has an interesting present day history. It was brought to a Bonhams valuation day in Cumbria by the owner who had inherited it and had no knowledge either of what it was or how much it might be worth.

An exceptional apple-green jadeite ‘chrysanthemum’ washer Qianlong/Jiaqing (£20,000-30,000) is part of an impressive 15 piece strong private collection of jade and jadeite. The jewel-like washer is exceptional in the quality of the lustrous translucent apple-green tone jadeite stone and the masterful carving of the craftsman. Its melon decoration bears a rebus for the phrase – ‘the blessing of ceaseless generations of sons and grandsons’ – which would have carried a particularly auspicious meaning during the new year’s eve ceremony and would have been a suitable imperial gift or special commission.

An exquisite collection of porcelain and other works of art offers a particularly fine ‘Guangzhou imperial tribute’ stained ivory ‘peony and pomegranate’ ruyi sceptre, Qianlong (£30,000-50,000). The meticulous carving of the present ruyi is exceptionally rare. It demonstrates the high level of craftsmanship available in the 18th century and distinguishes this example from many other sceptres carved as plants. The collection, assembled with great care in the 1960s and 1970s, also includes a gilt and grisaille-decorated ruby-back ‘dragon boat’ dish, Yongzheng (£10,000-15,000), as well as a number of doucai decorated dishes dating to the 18th century.

Bonhams International Head of Chinese Art, Asaph Hyman, said, “Private collectors of Chinese porcelain and art have always played a vital role in ensuring that these wonderful objects are preserved.  We are fortunate in this sale to be able to include pieces from a number of important collection including, of course, the renowned Cunliffe Collection.” He continued, “At the same time, new discoveries are always exciting and it is a great pleasure to be able to offer a magnificent ‘Chilong’ bottle vase brought to a Bonhams valuation day by someone who had no idea of its significance.”