A rare banknote featuring the word SEX spelled out in palm tree leaves over the Queen’s shoulder has sold for nearly 250 times its face value. Auctioneers were hopeful of a winning bid of £200 to £300 to secure the Seychelles 50 rupee note – whose face value is equivalent to around £2.50. 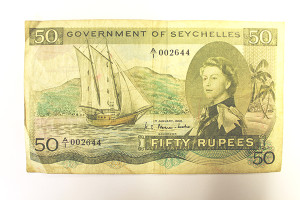 But at Moore Allen & Innocent, the banknote sold for 248 times its face value when auctioneer Philip Allwood brought the gavel down at £620. The note was issued by the Government of Seychelles between 1968 and 1973, and features an image of a young Queen in the foreground, with the tropical island behind her. 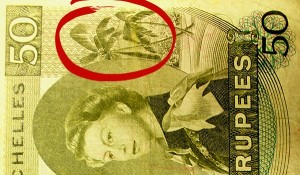 It was produced at a time when the Seychelles was seeking independence from Great Britain. The suspicion was that pro-independence printers had incorporated the word SEX – spelled out in palm fronds – into the note.

While some bidders had set their sights on the bank note, others were zooming in on a pair of binoculars, which sold for twenty times their estimate, despite literally looking like they had been through the wars.

The grey naval binoculars were sold with a brass mounted wall pocket inscribed The Honorary Air Commodore, and a Nazi Iron Cross medal bearing the date 1939. Despite the condition – the rubber eye pieces of the binoculars were perished, the paint was peeling, and the lenses were dirty – the lot sold for £1,700 against an auctioneer’s estimate of £80 to £120. 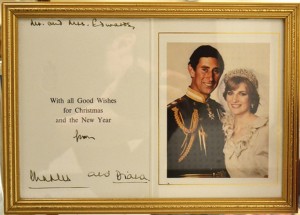 Elsewhere in the sale, a late 17th century Tuscan walnut casson chest achieved £720, a 19th century mahogany bookcase sold for £620, and a Turkish prayer rug in greens and terracotta with gold and teal motif decorated borders sold for £600 – all around the auctioneer’s estimate.