Works by Greek artists from the 1930s dominated Bonhams‘ recent Greek Art auction in London, with the sale making more than £1.3m to demonstrate that demand for art from Greece continues. 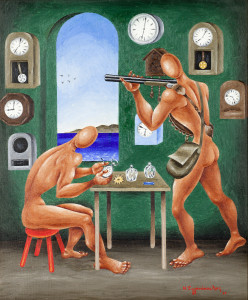 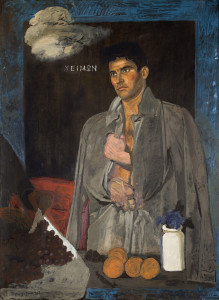 However, Winter (left) by Yiannis Tsarouchis (1910-1989) was the sale’s leading lot making £146,500. Painted in Paris in 1968 it forms part of the Four Seasons collection and the imposing male figure at the centre of the canvas stands as a symbol of the modern Greek spirit – a constant theme in Tsarouchis’s work. His charming rendition of his niece, Portrait of Despina wearing a rose dress, shows the artist matching his technical perfection as a draughtsman with his talent for revealing the essence of his sitters. The painting was estimated at £20,000, but went on to sell for £64,900.

Bonhams Greek Art specialist Olympia Papas said, “This was a high quality sale with paintings from all the major eras of Greek art attracting keen interest. Many works met or exceeded their upper estimates and it was encouraging to see a wide range of bidders not only from the Greek speaking world but from other countries too.”