West Midlands auction house Cuttlestones is holding a sale of an extensive collection of Charles Dickens novels – including a number of rare first editions – in its forthcoming Specialist Collectors’ Sale in Wolverhampton on Friday 6th May.

While Dickens is among one of the most published authors in history with his popular novels have never gone out of print, first edition examples of his work are particularly hard to come by; making them especially sought after by collectors. The collection entered into this sale comprises over 20 Dickens novels put together by a serious collector in the early 20th Century, which has been inherited by the current owners.

A journalist and editor before embarking on his career as a novelist, most of Dicken’s works were issued in monthly parts before appearing in book form. His first book was Sketches by Boz; Boz being a pseudonym he used.  A second edition example of this early book, published in 1836 (the same year as the first), is included in the sale.  Not one of his most popular works, it is valued at £100-200.

Elsewhere in the collection, first editions of some of his most popular books are expected to achieve far greater figures – often due to interesting oddities that were ironed out in subsequent editions. 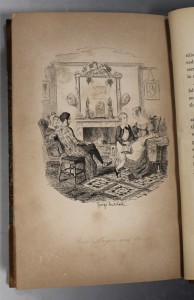 A prime example is the edition of Oliver Twist – or Oliver Twist or the Parish Boy’s Progress – to give it the title it was first published under in 1837.  Rushed into print before all the monthly instalments had been issued in the press, the illustrator Cruikshank finished the plates for the book in a hurry. Dickens didn’t see them until the last minute and disliked what became known as the ‘fireside plate’ – a picture towards the end of volume 3.  An alternative picture inside a church replaced it, but a few volumes with the ‘fireside plate’ had already been released.  Moreover, Dickens decided to drop the name ‘Boz’ and the later editions were then issued under Charles Dickens.  One of the very early three volume sets with the author as ‘Boz’ and the infamous ‘fireside plate’ is set to come under the hammer as part of this sale. Despite not being in its original covers, having been rebound, it remains an important example; carrying a guide price of £800 – £1,200.

Whilst these lots are sure to whet collectors’ appetites, the highlight of the sale has to be a good condition, first edition of A Christmas Carol. It was first published as a small, brown cloth-covered book in 1843. The only first edition of Dicken’s works to include coloured pictures, it contains four hand-coloured plates.

Several versions of this book lay claim to being first editions, but it is generally accepted that the first issue of the first edition of this book must have blue & red printing on the title page, green coloured endpapers, the date given in Roman numerals and the title ‘Stave I’ rather than ‘Stave one’ on the first text page.  The book up for sale at Cuttlestones has all these attributes, and is also in remarkably good condition for its age.  It carries an estimate of £3,000 – £5,000.

And it’s not just Dickens novels that will mark this sale out for bibliophiles. Other notable books include three rare 17th Century tomes on Heraldry. Featuring hand-coloured coats of arms they are likely to be of great interest to niche collectors. There is also a first edition of Watership Down by Richard Adams. Rejected by six publishers before being taken up by Rex Collings, the book went on to win several prizes and was turned into a major film. Although an ex-library copy, the book for sale is in good condition; carrying a guide price of £100 – £200.