One of Clandon Park’s most iconic objects, its 18th century State Bed, has been rescued from the rubble a year after the fire which devastated the Surrey mansion last April. 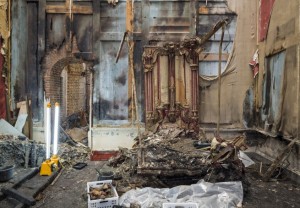 Ever since the fire on 29 April last year, National Trust staff had been anxious to reach the State Bed but had to wait for the house to be made safe to enter. Archaeologists then had to work their way through timber and rubble eight feet deep.

As the rooms were gradually cleared, conservators were able to get closer and closer, allowing them to work out the best way to dismantle the bed and carefully move it to safety.

The State Bedroom was the highest status room in 18th century aristocratic houses. This ground floor room imitated Royal Palaces, where only the closest Royal aides could enter this very personal space of the King or Queen.

The focus of the room was the State Bed itself. Rarely slept in, these beds were commissioned to mark a significant family event or in anticipation of a royal visit. 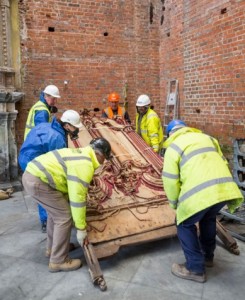 Clandon’s State Bed was made around 1710 and with its highly worked wool and silk embroidery it would have been the most expensive object in the house. Family tradition maintains that Princesse de Lamballe, a friend of Queen Marie Antoinette, was the last guest to sleep in the bed.

Miraculously, the National Trust had just finished the conservation of the State Bed’s luxurious curtains at the time of the fire so firemen were able to snatch them from the room still packed in their boxes.

National Trust project curator Sophie Chessum said: “I remember standing on the lawn watching in horror whilst this wonderful bed was surrounded by flames, convinced that I would never see it again. Walking round with a fireman the next morning I couldn’t have been more surprised to see the State Bed still standing amongst the fallen timbers and charred panelling.  It was damaged, but surviving, which is remarkable.”

She continues: “Slowly but surely we began to dismantle the bed, untangling the fallen silk trimmings and braid called ‘passementerie’ and removing the embroidered valances that had collapsed. We all worked together, with archaeologists stepping in to excavate the last of the rubble to ease the bed, and its lower valances, free.  The canopy that was suspended above the bed, the ‘tester,’ had been knocked down and shattered by the falling ceiling, and was carefully carried out.” 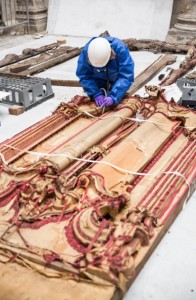 Removing the precious textiles revealed that the horse-hair stuffed mattress beneath was past saving but the original base-cloth which once supported the bed’s three mattresses was still intact and tied to the frame with its original strings. The strings could be adjusted for comfort giving rise to the expression ‘sleep-tight sweet dreams’.

The work to remove the State Bed also involved dismantling the 300 year-old frame, and lifting the enormous decorative headboard, still resplendent in yellow silk with crimson tufted braid and ribbons, to safety.

Now removed from the house, the State Bed will be assessed and a decision taken on the most appropriate treatment and the plan for its future.

Sophie Chessum adds: “It’s an enormous relief and a great joy to have successfully retrieved this iconic part of Clandon Park’s history and, combined with the perfectly restored set of curtains saved on the night of the fire, we’re tremendously hopeful for its future reinstatement.” 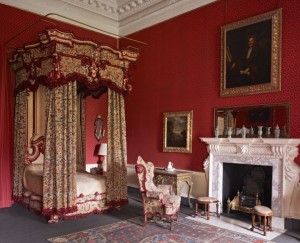 Conservators on site are continuing to assess and clean the many items of plasterwork and porcelain being recovered as part of the salvage operation, which is likely to carry on throughout the summer. A year on from the fire the salvage process has moved from the single borrowed caravan, which acted as the property team’s HQ immediately after the fire, to a comprehensive construction site and ‘salvage village’.

The salvage operation has continued to uncover other important elements of the collection that survived the fire, including the carved marble overmantels in the Marble Hall (by Flemish sculptor John Michael Rysbrack) which have remained intact and the surprising survival of key ceramic and china items from the house’s collection.

The conservation charity announced earlier this year its intention to restore Clandon’s most architecturally and historically significant rooms on the ground floor while at the same time creating vibrant, more contemporary spaces on the upper floors.

The National Trust hopes to launch a competition later this year to find the right architect to bring the space alive in a bold and imaginative way.