A rare piece of Marvel Comic superhero artwork featuring Thor from the late 1960s is one of the start lots in the Charterhouse‘s June auction of collector’s items in Sherborne, Dorset, with an estimate of £5,000-8,000. 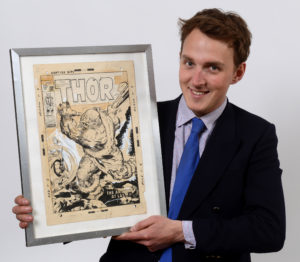 The comic cover dates to December 1968 and was designed by Jack Kirby, one of the most influential creators and major innovators in the comic-book medium in the 20th century. Jack earning himself the nickname ‘King’, and among many of his co-creations are Captain America, The Fantastic Four, The Incredible Hulk, X-Men, many others, and of course Thor. 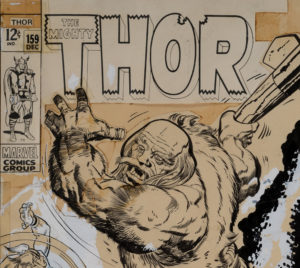 “Rare and early Marvel Comics can command six figure sums in mint condition – they have always been sought-after, and with the recent string of blockbuster films there is even more interest in this collecting field.” Commented George Holtby of Charterhouse. “Many of us have our own favourite super heroes or villains, mine has always been Batman although I always liked the look of Cat Woman!”

The 42 year-old owner of the original comic cover design, who lives in London, inherited the picture from her father. Although it is not known how the picture came into her father’s possession, he was a leading art director of commercial adverts in the 1970s and 1980s, and it is suspected it was acquired though one of his colleagues or contacts.

The picture was hung on the owner’s bedroom wall from the mid 1970s. In her early years, she thought Thor was the monster rather than the hero. Now consigned to the Charterhouse collector’s auction she hopes someone else will enjoy the picture rather than being frightened of it.