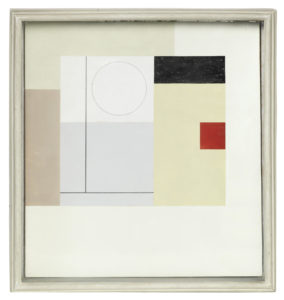 Important works by artists of the St Ives School and other key figures in the history of British Modernist art, are to be sold at Bonhams Modern British and Irish Art Sale in London in June. They come from the private collection of one of Ben Nicholson’s major supporters, Cyril Reddihough, or ‘Redd’ as the artist affectionately called him.  Among the highlights are key pieces by Ben Nicholson including Painted Relief dated 1941, estimated at £400,000-600,000 and 1928 (Pill Creek) with an estimate of £200,000-300,000.

A solicitor by profession, Yorkshireman Cyril Reddihough was also a talented amateur artist who in his mid-20s struck up an acquaintance with Ben Nicholson that deepened into a lifelong friendship. They visited each other frequently over many decades and travelled through Italy together during the 1950s. Reddihough became a major supporter of Nicholson’s work, buying paintings from the artist throughout the latter’s career. He also purchased important pieces by Nicholson’s first wife, Winifred Nicholson (1893-1981), and Barbara Hepworth (his second wife) and by many other British modernist artists including Henry Moore, Christopher Wood and Alfred Wallis.

Just as importantly, he was a champion for Nicholson’s abstract cause at a time when such art was widely ostracised. In 1930 Cyril wrote a poetic foreword to Nicholson’s early one-man exhibition at the Lefevre Gallery in London. There Cyril states, ‘Ben Nicholson, as an artist brooding upon the mysteries of form and colour and the life latent in them, lives in a seclusion as austere as that of a medieval monk in his cell’

Major works from the collection include: 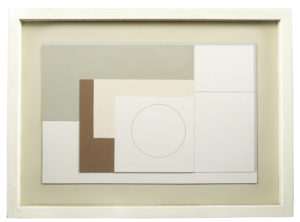 The painted reliefs which Nicholson produced from 1933 onwards were pioneering in their absolute abstract conception. They are not only among his finest achievements but are probably the most crucial contributions of modernist British art to the international art scene in the first half of the 20th century. This work dates from Nicholson’s pivotal early years in St Ives where he, his wife Barbara Hepworth and their triplets, had moved in 1939 to escape war-threatened London.  (He stayed until 1955; Hepworth lived there for the rest of her life). The artistic colony which built up around them in St Ives made an immensely rich contribution to British artistic life in the war and post-war years. 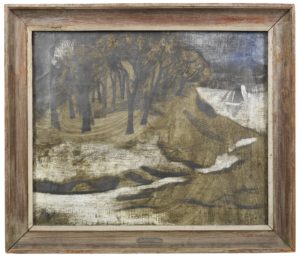 Pill Creek by Ben Nicholson is an outstanding and highly important example of Nicholson’s work dating from the late 1920s. It features widely in the literature about the artist and ranks among the finest paintings by Nicholson from the formative first decade of his career, left in private hands. It has been in the Reddihough Family Collection since at least 1948.

During his long and distinguished career, the ‘reclining figure’ along with the ‘mother and child’ theme were the two subjects that obsessed Henry Moore more than any other. The present work was conceived at the end of the War in 1945 and cast in a bronze edition of seven. Moore would often 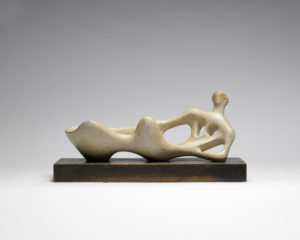 work on small models made from either clay or plaster to develop the theme of his sculpture and then work these into larger examples to be prepared for casting. Few of these original models exist from the artist’s early days as they were often destroyed to prevent unauthorised casts being produced. The present plaster, seemingly in excellent original condition and fully worked, is a rare insight into Moore’s working method and something that is seldom available on the open market.

Painted around 1925-6, the work depicts the family who lived next door to the Nicholsons when they moved to Bankshead Farm in north-east Cumberland in 1923. Her biographer, Christopher Andreae has described the work as ‘One of Winifred’s most monumental and sympathetic paintings of people.” 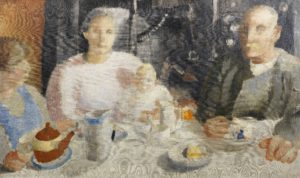 Bonhams Director of Modern British and Irish Art, Matthew Bradbury, said, “Cyril Reddihough’s patronage was, of course, very important to Nicholson financially but the story of their relationship is really one of a great friendship as we can see in the personal works within the Reddihough collection.

“The major acquisitions which provided Ben with such security were rewarded with personally dedicated, at times esoteric and always thoughtful pieces. Gifted works, inscribed by Ben appear regularly in the collection from the 1920s onwards and include the beautifully crafted Bus Ticket, regular and varied Christmas tokens also sent from Barbara Hepworth and numerous memento drawings and prints of trips taken together. The Reddihough Collection presents the largest ever single owner group of works by Ben Nicholson to appear at auction, an unprecedented opportunity for collectors to engage with one of the most significant collections of its type to ever come to market.”