An original drawing by arguably the most famous English cartoonist of the early 20th century has sold for £1100 at auction after the vendor bought it for £2 at a car boot sale. 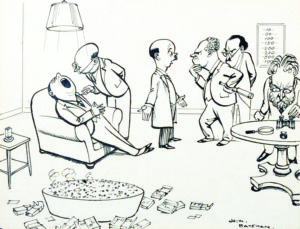 The Larynx Preservation Committee Fail To Detect The Slightest Suggestion of Throat Trouble, In A Man Who Has Chain-Smoked One Thousand Cigarettes is another classic from HM Bateman (1887-1970), whose works had previously sold for thousands of pounds at John Nicholson’s January 28th auction.

The woman who sold this latest cartoon had bought it at the car boot sale in London because she liked it and saw that it was hand drawn. But she accidentally smashed the frame while moving house and so put it under a bed, where it lay untouched for two years.

Finally getting round to doing something about it, she looked up the artist’s name and discovered that he was well known. After a leading auction house turned the picture down because they felt it would sell for less than £1000, the vendor did a Google search for an auction house that had sold Bateman cartoons and came up with John Nicholson’s successful sale of two original signed Bateman watercolours for £3200 and £2400 in January.

John Nicholson’s specialist Buffy Parker put the 6¾ x 8¾in car boot sale find into the May 11 sale with an estimate of £500-£800, but had hopes of it going higher.

The result backed that view after a bidding battle took it to £1100 when it sold to an overseas buyer who had underbid the previous Bateman lots.

“It was a happy ending for buyer and seller,” said Mr Parker, “and once again illustrated not just the resurging popularity of Bateman, but also the enduring appeal of satire on the English character. Having developed a reputation as the go-to auction house for his work, we are delighted to have been of help again in finding the right home for this accomplished work.”