A limited edition bronze by the late Dame Elisabeth Frink (1990-93) is one of the highlights available on Fine Art Exchange (FAX),  a new curated online marketplace for buyers and sellers of art launched by Johnny Messum of long-established Cork Street, Mayfair dealership Messum’s. 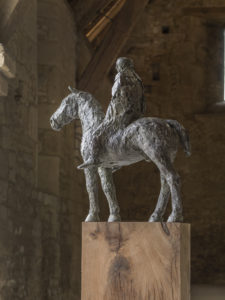 The platform aims to be a place for private buyers and sellers of premium art works to conduct transactions in an authoritative and trusted arena. The system will guarantee the authenticity of listed works and sales won’t be completed until the buyer has had the chance to inspect the purchase on delivery.

Johnny Messum said, “We wanted to create a simple and clear concept that put buyers and sellers of works valued at more than £10,000 together in a safe environment that is easy to use and without it costing them a fortune.”

The platform is focused on the gap between the relatively cheap but completely unvetted online model available via the likes of eBay and the fee-heavy catalogued sales by traditional auction houses hosted by platforms.

“FAX occupies the space between the two,” Johnny said. “With consignments curated by our in-house specialists, buyers can be confident that they get what they are paying for. The fact that the transaction is not completed until they have had the chance to physically inspect what they are buying adds to that confidence.

“This service also gives sellers targeted access to serious collectors quickly without having to pay transaction rates at auction house or traditional gallery levels. And because in most cases these will be private-to-private sales, no Artist Resale Right is applicable even for works that would qualify under other circumstances.”

FAX will initially specialise in 19th and 20th century British art, with the operation partnering with Messum’s and others to provide curating expertise in assessing works. They expect to expand the range, with relevant expertise provided, as demand increases.

New listings will appear on a monthly basis and the art ‘stays on the wall’ until it sells or the consignor decides to withdraw it. Buyers can make an offer below the asking price, which will be considered by the seller. The site is set up so that multiple buyers can make offers on the same work at the same time.

The Frink bronze, entitled Robed Rider, was conceived in 1984 and cast two years later in an edition of 9. The bronze on FAX is cast number 3 and priced at £250,000. Purchased from the artist by the current owner, it is in very good condition. Another cast appeared in Elisabeth Frink, Sculpture since 1984 by Edward Lucie-Smith.