Ewbank’s, the leading Surrey auction house, has one man’s collection of more than 500 pieces of antique English and Irish glass which is to be offered for sale on Friday, 24 June at 3pm. The fully illustrated catalogue is available at www.ewbankauctions.co.uk, and also at www.theauctionroom.com. 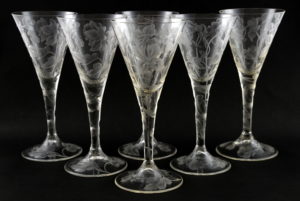 Chris Ewbank, senior partner at Ewbank’s, described it as “the best single owner collection of antique glass we have ever been instructed to sell”. The vast collection has been split into around 300 lots to ensure accessibility across a range of budgets, with estimates starting from only £30. The collection as a whole is expected to reach between £30,000 and £50,000.

The collection has been consigned for sale by Doctor Howard Manuel, who started buying around 50 years ago, after a visit to the glass factory in Waterford, Ireland,  established an ongoing love for antique glass. It features an array of intriguing glassware including 18th century engraved rummers; goblets; ale, wine and cordial glasses; and a large collection of decanters, many of which are from the ever-popular Cork Glass Company. Dr Manuel built the collection with purchases from auction houses in London and the regions, as well as antique glassware specialists. 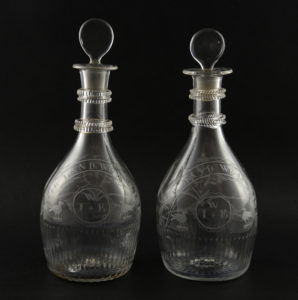 A pair of early 19th century Waterford mould blown bottle shaped decanters with stoppers is expected to garner particular interest from buyers. The necks have two feathered double rings, and the bodies are engraved with arched banners reading “The Land We Live In” (a popular toast at that time) above a circular panel with the initials “W.I.E” and verso with thistle and barley.

A diamond-point engraved armorial rummer (15cm, 6in), made by Sutherland’s of London, dated 1851, carries an estimate of between £300 and £500. It has a u-shaped bowl engraved twice with the Royal coat of arms, scenes of Windsor Castle and St James’ Palace, as well as military figures, above finely inscribed verses.

It is raised on a short stem and circular foot engraved with acorns and oak leaves. Experts at Ewbank’s deem it a fine early example of Sutherland’s work. The rummer was previously sold in the Ralph and Meriel Richardson Foundation Sale at Southeby’s in April 2001.

Other high profile lots include a pair of 19th century glass goblets (14.5cm) on square feet, engraved with the crest of the 27th Enniskillen Regiment on the front, and flowers and foliage on the back. The goblets are valued at between £350 and £550. They were formerly seen at a sale at Sotheby’s in July 2005.

A set of six 19th century drinking glasses have been given an estimate of between £300 and £500. They have trumpet bowls on round feet, are engraved with flowers and foliage, and stand 23cm high. It is thought they were made for the Great Exhibition of 1851 at Crystal Palace, London.

A pair of mid-19th century cut-glass confiture jars and covers of ovoid form with diamond carving on square star cut bases have been valued at between £300 and £500. They stand 25 cm high and previously were purchased at the Sir John Gielgud sale at Sotheby’s in April 2001.

An 18th century Irish glass decanter, possibly made by the Cork Glass Co., commemorating the 100th anniversary of the Battle of the Boyne has been valued at between £300 and £500.

It is 28cm high, and is engraved with William III on horseback above a swag reading “Boyne 1690” on the front, and on the back the inscription reads “Newry L.W.S, Anniversary 1790”. The Battle of the Boyne of 1690 took place across the River Boyne near Drogheda on the east coast of Ireland. It was between English King James II and the Dutch Prince William of Orange, who with his wife Mary II – James’ daughter – had overthrown James in England in 1688. The battle saw victory for William and scuppered James’ attempt to regain the British crown. The victory aided the continued Protestant ascendancy in Ireland, and is still celebrated by Northern Irish protestants every year.

Alongside these pieces with higher estimates, there is a collection of more than 50 Victorian “penny licks,” also known as “icecream licks” for sale, for more modest budgets. They  have been divided into lots of six to eight and prices per lot start from £50. A penny lick was a small glass for serving ice-cream, sold for one penny by street vendors in the mid 19th to early 20th century.