A celebrated and colourful slice of Great British seaside humour will go under the hammer at Cheshire auctioneers Peter Wilson next month. 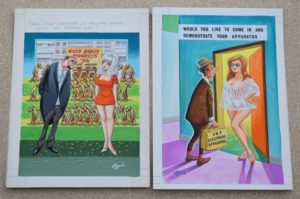 So-called saucy postcards from the fifties and sixties with their mix of stereotypical characters and highly suggestive double entendres were popular amongst holidaymakers sending messages home from the coast.

While these vintage postcards, once up there with sticks of rock and donkey rides on the beach, can be had for a few pounds apiece at boot sales and flea markets, Peter Wilson have something far more valuable: the unique original artwork for six of the smirk-inducing miniature masterpieces of the era. 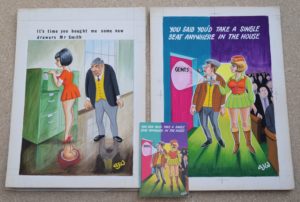 Little is known about the artist who painted them, other than his name was A.J. Williams and he lived and worked in Manchester. But he had a wicked imagination and a sense of humour that would have been at home in any ‘Carry On’ film.

The mini-skirted secretary who asks her boss for new drawers is standing on a highly-polished floor. The sales rep being invited in by the negligée-wearing blonde has something on his mind other than the electrical apparatus in his suitcase and the bikini-clad beauty doesn’t have water wings, much to the embarrassment of the man paddling with his family on the beach. 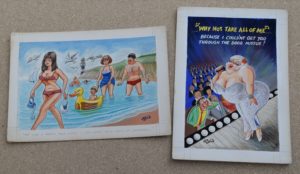 The risqué views are typical of the saucy cartoon-style postcards featuring stereotypical characters such as large ladies, naughty vicars, Jack the lads and put-upon husbands. They were found in every seaside resort souvenir shop and newsagent from the 1930s on.

In 1954, the newly-elected Conservative government launched a morality campaign and some of the cards were banned as being obscene. Changing attitudes towards the content of the cards and a decline in the quality of the artwork and humour led to their decline in the 1980s.

Auctioneer Robert Stones said, “Old original postcards featuring views of resorts, towns and villages are important pieces of social history that document change and they can fetch surprisingly large sums at auction, particularly in the case of well-filled albums.

“When thumbing through a postcard album stuffed with those seaside gems, don’t overlook the less obvious topographical scenes. Non-tourist picture postcards make significantly more money. For example, a black and white card showing Crewe would be so much harder to find than a view of the promenade at Blackpool or Rhyl.

“Saucy postcards were so popular that many hundreds of thousands were printed and so they remain more common and invariably worth less. However, original artwork for cartoon cards is rare and collectable for the postcard enthusiast, even though our idea of humour might have changed, and we expect them to sell well.”