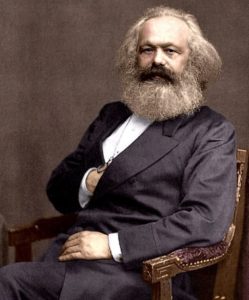 A rare presentation first edition of Karl Marx’s seminal work, Das Kapital, inscribed by the author and given to Johann Eccarius, the close friend with whom he fell out and who may have betrayed him, sold at Bonhams Fine Books and Manuscripts sale in London on June 15 for £218,500. It had been estimated at £80,000-120,000. This is a new world record for a copy of Das Kapital at auction. 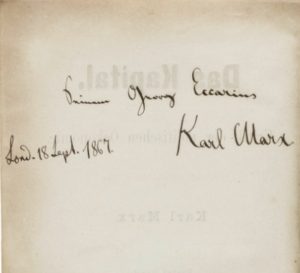 Bonhams senior book specialist Simon Roberts said, “This was a very important copy of one of the world’s most influential books and not surprisingly the bidding was extremely keen – presentation copies are extremely scarce.  I suspect the irony that a devastating criticism of capitalism should sell for such a huge sum would have caused Marx a wry smile.”

The copy was signed and dated on 18 September 1867, four days after its publication, and is among the very few presentation copies known to have survived. Das Kapital consists of three volumes but this first part is the only one published during Marx’s lifetime. The others, edited by Friedrich Engels from Marx’s notes, appeared in 1885 and 1894.