Cheshire’s Peter Wilson auctioneers says that prices achieved in its recent sale shows the fight against flatpack furniture is being won! 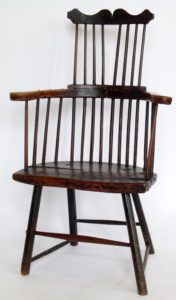 Peter Wilson Managing Director, Robert Stones, said, “Our auctions are always popular with private buyers and collectors, but a move away from Georgian and Victorian furniture over the last 10 years has seen good quality pieces that would give years of service being sold relatively cheaply when compared to the high street.”

He continued, “Perhaps the current advertising campaign for solid wood furniture we see on the TV every night is swaying opinion, but the trend is finally moving away from the flatpack and our private buyers are increasingly furnishing their homes with antique pieces purchased in the saleroom.”

He added that the difference between antique and flatpack furniture was that antique furniture retains its value and could prove to be a lasting investment. “Certainly, there’s never been a better time to buy, particularly when furnishing a home with purchases made on the high street is so expensive. The clever person will buy quality antique pieces to incorporate in room settings alongside modern furnishings. There’s no better way to add that wow factor to a room.”

Illustrating the point was the price paid for a charming George III mahogany secretaire bookcase, the top section with a pair of astragal glazed doors, while the lower section had a fall front that opened to reveal a leather topped writing area and fitted satinwood drawers and pigeon holes. It sold on mid-estimate for £900.

Equally elegant was a Neo-classical chaise longue with satin upholstery, the carved rosewood frame with an acanthus-carved top tail and polygonal legs on brass casters. It was estimated at £400-500 but sold for £750. From a private home in Chester, the piece was delivered to the Nantwich home of its purchaser to replace another sofa, which was brought back to the saleroom to be entered in a future sale.

Close behind at £700 was a fine set of four brass-mounted Empire style dining chairs with cane seats and sabre legs. They were made by the renowned Collinson & Lock, a London firm founded in 1870 and taken over by Gillows in 1897. The same company made furniture for the Savoy Theatre and the Law Courts among other important customers. 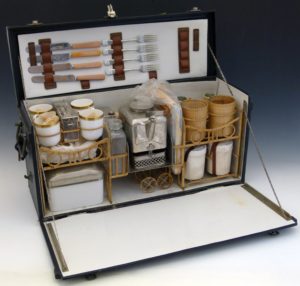 Surprise of the furniture section, however, was the £1,500 paid for a primitive fruitwood so-called “stick-back” elbow chair of the type made in the Thames valley region of the country in the 18th century. Becoming increasing scarce, it was a good example of this unique regional chair with an excellent patina built up over the ages and estimated at a tempting £300-350.