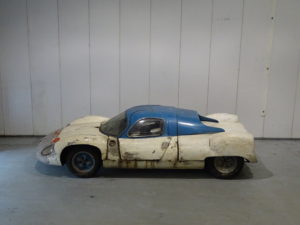 The car emerged from its 45-year slumber when a Manchester company carried out a house clearance. Racing as both a Spyder and GT in the 1960s, the two-seater now requires total restoration. Despite its short career, the Costin-Nathan proved to be a very capable racer. Surviving examples showcase Costin’s unique talent for designing lightweight and very aerodynamic racers.

The car is the original Works Prototype as raced with considerable success by Roger Nathan in 1966. Bought by the previous owner (deceased) on 6th January 1967, without the initial Imp engine, it was given a Twin-Cam powerplant coupled to a Hewland Mk 5 transmission.

The driver was to be Chris Meek and the car was further modified with a hard-top to allow it to run as a GT.  A large folder of correspondence charts the trials and tribulations of the next three years which added but a single class win at Snetterton in May 1967 to the two-seater’s impressive racing resume.

Former race-driver, John Markey, who runs the H&H Classics Hindhead Surrey operation, said, “It is an amazing restoration project and a true ‘barn find’ slumbering in the late owner’s garage for the last 45 years.  This is quite a special car. I’m probably dewy eyed having raced one quite extensively in the ’60s.” 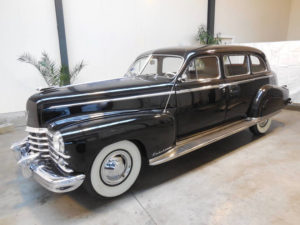 Another car which created great interest at the H&H Classics sale was a huge black 1949 Cadillac Series 75 Fleetwood Sedan, originally owned by Cardinal Richard J. Cushing, a close friend of the similarly Boston-based (and Catholic) Kennedy family. It sold for nigh on £40,000.

A high profile clergyman who once graced the cover of Time magazine, Cushing retained the Cadillac until the mid / late 1960s by which time he had married JFK to Jackie, baptized their children, given the blessing at his friend’s presidential inauguration and conducted one of the most high profile funerals in history following JFK’s assassination.

Research indicates that this car is likely to have transported the Cardinal to many of these happy and sad Kennedy events. Martin van der Zeeuw, H&H Classics agent in Holland who found the car, said, “Every now and then one comes across a car that is particularly interesting not just for its engineering or design or any other physical reason but because it casts a light onto our own human history. And this is one such car, its very close links with the remarkable, brilliant, tragic Kennedy family, makes it an object of particular and historic interest.”