A series of rare posters by Henri de Toulouse-Lautrec will headline the Vintage Posters sale at Swann Auction Galleries in New York on August 3rd. 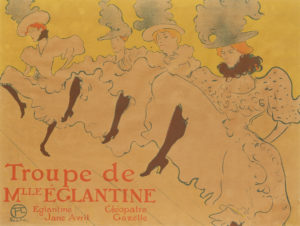 Dating to the artist’s Fin de Siècle period as the trailblazer of modern commercial art, they include some of his most famous designs promoting the entertainments of Paris, with estimates running up to $30,000 for a single example.

The auction is the first major sale of Vintage Posters since Christie’s closed their South Kensington department following the sale of the Dr Hans Sachs Poster collection as part of their Interiors sale on June 8.

“Christie’s decision to close their poster department after decades of successful auctions is the biggest development in the poster market recently,” said Swann President and Principal Auctioneer Nicholas D. Lowry, who also heads the Vintage Posters department at the Manhattan salerooms. 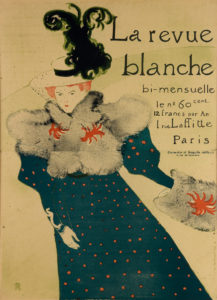 The decision also leaves Swann Auction Galleries, which began conducting yearly auctions of Rare and Important Travel Posters in 1999, as the only major auction house internationally with a department dedicated to Vintage Posters.

That programme of sales has now expanded to at least four auctions a year, covering Vintage, Travel and Modernist posters, with examples of the rarest designs from all over the world.

For example, as well as the Toulouse-Lautrec posters, the August 3 auction will offer two lots by Lautrec’s contemporary and almost equally famous designer, the Art Nouveau-inspired Alphonse Mucha. Both from 1896, Salon des Cent comes priced at $12,000-18,000, while La Dame aux Camelias carries hopes of $10,000-15,000.

The auction of close to 600 lots features posters from all around the world and every era of the Vintage age. Separated into sections that range from Art Nouveau and Early Russian designs to Cars, Travel and Ocean Liners, this is a truly international offering of rarities with something for every discerning dealer and collector.

From the best Art Deco-inspired designs of the steam age comes Holland – America Line, a striking 1936 creation by Willem Frederick Ten Broek showing the classic view of the liner’s enormous hull. Guided at $3000-4000, it is immediately followed by Cunard White Star / R.M.S. “Queen Mary”, published at around the same time to promote the Liverpool-based transatlantic service.

A design by one of the most sought-after of Poster artists, Paul Colin of France, promotes the national airline of Argentina. Areolineas Argentinas/DC6 is pitched at $1500-2000.

Bermuda, Australia, Switzerland and other countries also feature. Notably, Aage Rasmussen’s DENMARK, from 1946, for which Swann expect to take around $1000, is a prize-winning design judged by, among others, the doyen of steam age artists AM Cassandre, and it helped lead the revival of tourism in Denmark after the Second World War.