Ten Andy Warhol Marilyn Monroe prints are among the highlights of the forthcoming Anderson & Garland Contemporary and Modern Art and Design Sale. 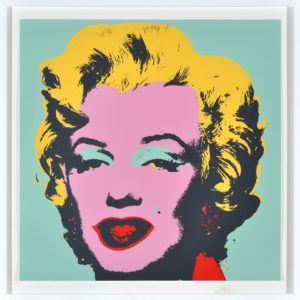 The iconic screen prints of the movie goddess, who would, like the Queen, have been 90 in June, are among the most important images of the Pop Art movement. Warhol produced the original run of 250 limited edition hand-pulled silkscreen prints in the months after Monroe’s death from a drugs overdose in 1962.

The prints on sale in 10 separate lots in the Anderson & Garland sale in Newcastle in July 19 are not from the original Factory Editions, examples of which are displayed in the Tate Modern in London.

These prints are from the Sunday B Morning Editions, which were originally produced in the 1970s and revived in the 1990s. The origin of the ‘B’ in the name is not clear, but Warhol was collaborating at the time with some Belgian artists who produced perfect copies of the Factory Editions using the same tools and techniques.

The prints up for auction at Anderson & Garland are 91cm x 91cm silkscreen prints with a blue-black stamp on the back. They have an estimated value of £500-£700 each.

Anderson & Garland auctioneer Phoebe Hoare said “They come from a major North East art collector who has contributed a number of works by innovative and influential modern artists. There is a lot of mystery about the Sunday B Morning editions, which have the blue-black stamp on the back. They come up for auction fairly regularly but it’s quite nice to have the whole 10 lots of them, which are in varying colours but all have the same identical iconic face.”

She continued, “The originals are the most expensive screen prints – a full set can command more than £1.5 million. This is a chance for people to own the same imagery for a fraction of the price.”

The world-famous image of Marilyn on the silkscreen prints comes from a publicity photograph from the 1953 film Niagara. They bring together two of the most common themes in Warhol’s work – death and celebrity – and the repetition of the image reflected the fact Monroe’s picture was everywhere in the media.

The prints are not the only Warhol-related items in the Anderson & Garland sale. Pop Art collectors will also be interested in Problemas de Pareja, a sketch for an exhibition poster for works by Warhol and Jean-Michel Basquiat displayed at New York’s Tony Shafrazi Gallery in 1985. It has an estimated value of £140.

The Anderson & Garland Contemporary and Modern Art and Design Sale brings together a wide selection of contemporary art, furniture and ceramics.