One of the first noticeable changes in dress was the number of people – both men and women –  wearing uniform. Around a quarter of the British population was entitled to wear some sort of uniform as part of the armed forces, women’s auxiliary forces or one of the numerous uniformed voluntary services and organisations. This increased demand for uniforms put enormous pressure on Britain’s textile and clothing industries. Both raw materials and labour had to be directed away from civilian production to ensure that the demand could be met for uniforms and the many other military uses of fabric, from tarpaulin to tyre components.

Commitments by shoe and boot manufacturers to produce footwear for the services contributed to shortages of civilian shoes. Wartime life changed the way civilians dressed at work and at home, inspiring retailers to sell innovative and stylish products such as gas-mask handbags and siren suits.

Clothes ration books were issued with food ration books from 1942. But clothes rationing was announced by Oliver Lyttleton, President of the Board of Trade, on 1 June 1941. Making the announcement just before a Bank Holiday allowed the Board of Trade time to brief retailers before the shops reopened. The news came as a complete surprise to most people. As with food rationing, which had been in place since 1940, one of the other reasons for introducing civilian clothes rationing was to ensure fairness. Rationing sought to ensure a more equal distribution of clothing and improve the availability of garments in the shops.

The rationing scheme worked by allocating each type of clothing item a ‘points’ value which varied according to how much material and labour went into its manufacture. Eleven coupons were needed for a dress, two for a pair of stockings, and eight for a man’s shirt or a pair of trousers. Women’s shoes meant relinquishing five coupons, and men’s footwear forced the surrender of seven coupons. Every adult was initially given an allocation of 66 points to last one year, but this allocation shrank as the war progressed.

The coupon allowance was at its lowest from 1945 and 1946. For the eight-month period from 1 September 1945 to 30 April 1946 only 24 coupons were issued, effectively allowing the shopper only three coupons a month.

Throughout the war, special provisions were made for some people, including manual workers, civilian uniform wearers, diplomats and theatrical performers. New mothers were also given 50 coupons.

Children’s clothes had lower coupon values in recognition of the fact youngsters would need new clothes as they grew. From 1942, all children were allocated an extra 10 coupons, with additional amounts issued for older children or those classed as ‘outsize’. Coupons were also needed for school uniforms, which could be a particular problem as many schools did not relax their rules on uniform during wartime. Clothing exchanges were set up by the Women’s Voluntary Service (WVS) to help meet the needs of women struggling to clothe their families. Women could swap the clothes their children had outgrown for extra points which could be ‘spent’ on other clothes at the exchange. Mothers were also encouraged to buy children’s clothing in bigger sizes so it could initially be taken in and then let out as the child grew.

Mend of an Era

The ‘Make Do and Mend’ campaign was launched to encourage people to make their existing supplies of clothes last longer. As the war went on, buying new was severely restricted by coupon limits and no longer an option for many people. The ability to repair, renovate and make one’s own clothes became increasingly important. Although shoppers would have to hand over coupons for dressmaking fabric as well as ready-made clothes, making clothes was often cheaper and saved coupons.

Make Do and Mend classes took place around the country teaching skills such as pattern cutting. Dressmakers and home sewers had to be imaginative and experimental in their choice of fabrics. Individual style flourished. Many women used furnishing fabrics for dressmaking until these too went on the ration. Blackout material, which did not need points, was also sometimes used. Parachute silk was highly prized for underwear, nightclothes and wedding dresses.

In wartime Britain women were frequently implored not to let ‘standards’ slip too far. There was genuine concern that a lack of interest in personal appearance could be a sign of low morale, which could have a detrimental impact on the war effort. This was one of the reasons for the government’s decision to continue manufacturing cosmetics, though in much reduced quantities. Make-up was never rationed, but was subject to a luxury tax and was very expensive. Many cosmetics firms switched some of their production to items needed for the war effort. Coty, for example, were known for their face powder and perfumes but also made army foot powder and anti-gas ointment.

Makeup and hair styles took on an increased importance and many women went to great lengths to still feel well-dressed and stylish even if their clothes were last season’s, their stockings darned and accessories home-made. Women found creative ways around shortages, with beetroot juice used for lip colour and boot polish for mascara.

Aspirations and hopes for the future were dominant themes in many of the government’s public information campaigns after the war had ended.

Rationing lasted, albeit in a gradually reduced format, until March 1949 and many of the changes brought about by war continue to shape fashion today. Developments in large-scale garment manufacturing helped to accelerate the growth of mass market fashion, which in turn helped department stores to flourish. The trend towards a more relaxed and informal style of dress also gathered pace in wartime. The Utility scheme ended in 1952, but it had given consumers new confidence to demand value for money and led to regulated standards in materials and manufacture.

Through the Utility scheme, high-end fashion designers produced styles for the mass market for the first time. In our own age of austerity the concept of Make Do and Mend has had a revival. Crafts such as knitting and sewing are popular outlets for creativity and invention, just as they were in the 1940s.

In 1942, the first ‘Utility’ clothes went on sale on the British high street made from a limited range of quality-controlled fabrics. Utility fabrics – and clothes made from these materials – gave the public a guarantee of quality and value for money and coupons. From autumn 1941 it became compulsory for all Utility clothes and garments to be marked ‘CC41’. The distinctive logo – likened to two cheeses – stood for ‘Civilian Clothing 1941’ and was designed by Reginald Shipp.

Utility clothing came in a limited range of garments, styles and fabrics. In 1942 and 1943, the Board of Trade introduced the Making-up of Civilian Clothing (Restrictions) Orders to make further savings of labour and materials and minimise manufacturing costs. These orders, often known as the ‘austerity regulations’, applied to the production of both Utility and non-Utility clothing.

Some of the most unpopular austerity regulations were those that applied to men’s clothing. Singlebreasted suits replaced double-breasted. Lapels had to be within a certain size. The number of pockets was restricted and trouser turn-ups were abolished. The ban on turn-ups was particularly unpopular, and many men circumvented the rule by buying trousers that were too long and having them altered at home. The length of men’s shirts was restricted and double cuffs were banned. It is estimated that these measures saved about 4 million sq yds (5 million sq m) of cotton per year.

Braces would have been a vital element of a man’s outfit as both zip fasteners and elastic waistbands were banned under the austerity regulations. Elastic was in very short supply throughout the war, and women’s knickers were one of only a small number of garments where the use of elastic was permitted.

Dresses could have no more than two pockets, five buttons, six seams in a skirt, two inverted or box pleats or four knife pleats and no more than four yards of stitching. Shoe designs were chunky and solid, with wedges or low 2in heels. Open toe shoes were banned as impractical and unsafe. Men’s shoes adhered to the usual formula of hardwearing Oxfords or brogue lace-ups.

What the Experts Say

“French couture by designers who continued to operate during this period is highly desirable and rare – designers such as Schiaparelli, Mme Gres, Lucien Lelong and Lanvin. American designers such as Irene, Adrian, Howard Greer and Lilli Ann are also popular. Closer to home, CC41 marked pieces such as dresses, suits and shoes are saleable in good condition, as are stylish 1940s hats when adorned with bows, etc. Also popular from this period are silk underwear and propaganda scarves.

Another interesting item from 1949 is the ‘Eperon’ handbag, produced by Hermes, which had rigid sides and was good for concealing black market purchases.” 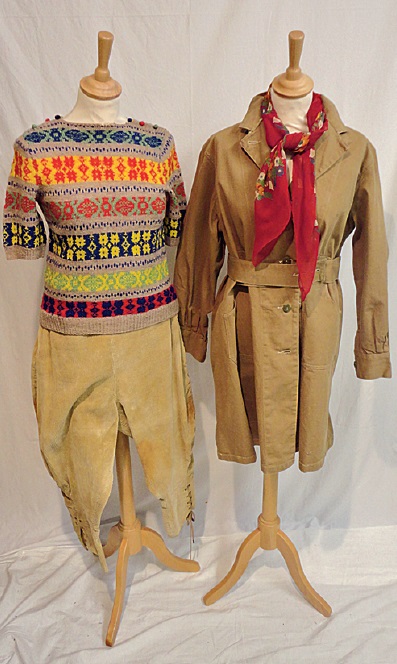 One of three 1940s Utility dresses which Kerry Taylor Auctions sold last year for a collective price of £190 (left). All the dresses which conformed to the requirements, namely having no more than two pockets, five buttons, six seams in a skirt, two inverted or box pleats or four knife pleats and no more than 4 yds of stitching. At the same sale a SEF blue wool and gingham rayon Utility suit, mid 1940s, with the CC41 Utility label sold for £170.

A WWII Women’s Land Army uniform (right), including a pair of cord breeches, canvas overall with tie waist and a pair of Parker shoes brown leather lace ups (size 7½) all marked ‘Women’s Land Army’ and a knitted fair isle jumper with buttons to the shoulders with a pair of ladies’ leather brogues with tassel trim and lace, sold for £360, double their estimate, at Tennants’ textile sale in 2011. 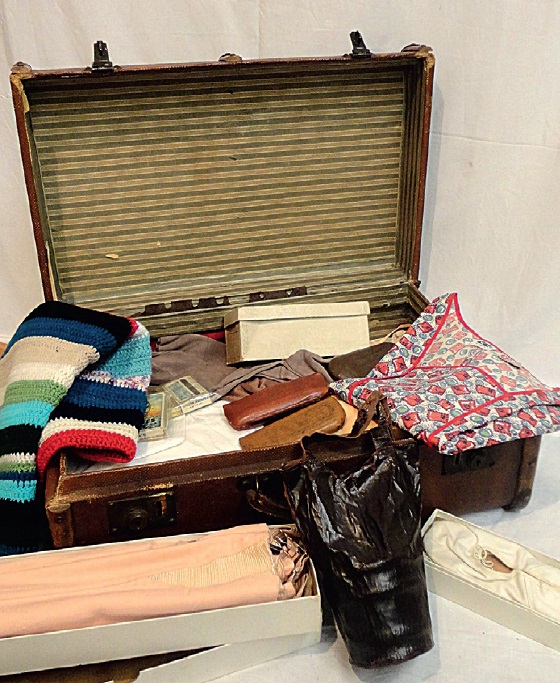 A group of assorted ‘Utility’ clothing and WWII accessories (right), including a gas mask in its original zipped bag and a pair of brown leather gents gloves (size 8) sold for £240, double its estimate, at Tennants’ textile sale in 2011. The Utility items, which are all stamped ‘CC41’, also included a pair of unworn white cotton ballet shoes marked ‘Gamba Ltd, London’; a pair of child’s leather unworn cream leather Mary Jane shoes and a St Michael pink cotton corset.