A rare 15th century Tibetan stupa, or memorial vessel, is one of the highlights of Chiswick Auctions Asian Art sale on 6th September. 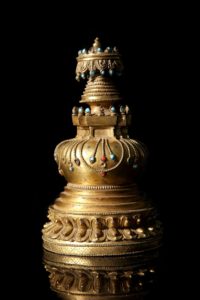 The original stupas were large monuments that were built over the remains of important figures. They housed sacred relics of Buddha, or marked the sacred spots where an important religious event had taken place. Stupas have been in existence in the East for millennia. Buddhist versions were created while Buddha was still alive. In India stupas was revered by Hindus and Buddhists alike.

Lazarus Halstead, Head of Chiswick Auctions Asian Art department, said, “The sale of this piece offers collectors a great opportunity to acquire a rare and early example of an important Buddhist devotional object.”

Portable versions, such as this example, were created in order to be able to give devotion in multiple locations. They have the same symbolic meaning of the monumental stupas, representing the past, present and future and were placed on altars as a devotional object.

The example in the sale is from the 15th century, making it exceptionally rare. Highly decorative, it is gilded  and features beaded garlands and pendant jewels inset with turquoise. It is estimated to fetch £3,500-£4,000