With the LAPADA Art & Antiques Fair returning to London’s Berkeley Square next month, it brings together over 100 of LAPADA’s members to the Mayfair venue.

We caught up with the organisers of the event to get an in-depth look at what visitors can expect – from coveted works of art and antiques, to design and decorative arts, with prices starting around £500 to £50,000 – and here’s our list of ten highlights to see. 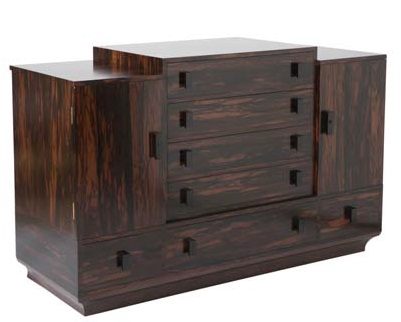 Serge Chermayeff (1900 – 1996), Art Deco side cabinet, circa 1928-1931, 153cm w x 61cm d x 99cm h, England, from Holly Johnson Antiques.
Born in 1900, Chermayeff came to England and was educated at Harrow. After spending time as a  journalist and a professional dancer he joined Waring & Gillows as head of the Modern Art Studio. Together with Paul Follot, the French decorator, who ran the Paris branch of Waring & Gillows, he organised an exhibition of modern design, which gave the British public access to the luxurious Paris furnishings and an introduction to the French modern style. This cabinet was designed for Waring & Gillows and one identical in form was featured in the exhibition, but this example is veneered entirely in coromandel. Chermayeff founded his own design practice in 1931. Between 1933-36 he collaborated with the architect Erich Mendelsohn on several buildings including the De La Warr Pavillon in Bexhill, Sussex. Built of steel, glass and concrete, the building was the first public building in Great Britain to be designed in the International Modern Design. In 1939 he went to teach in the USA, later becoming head of architecture at Harvard, then Yale in 1962. 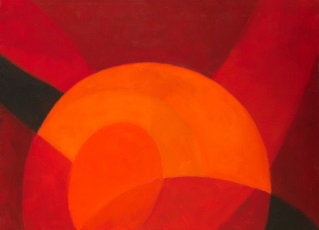 Mouvement, circa 1937, oil on canvas, from Whitford Fine Art.

Mouvement is a seminal work from one of the most individual abstract painters of the École de Paris. The work comes directly from the estate of the artist and will be offered for sale to the public for the very first time at the LAPADA Fair. It addresses fragmentation, luminosity and composition in a geometric abstract fashion, expressing an intense and continuous energy through the use of the colour red – the artist’s favourite. Lacasse’s paintings predate the likes of Nicolas de Staël and Serge Poliakoff. When in 1912 Wassily Kandinsky published a manifesto about abstract art, he was unaware that his theories had already been put into practice by the Belgian teenager Lacasse. Whereas Kandinsky reached abstraction through a solid intellectual preparation, Lacasse found himself on the same road through pure intuition. Lacasse’s first abstract pastels, dated 1910, were made after a day of hard work at the local Tournai quarry, where the austere structure of the quarry and its rocks fired his imagination.
During the 1920s, Lacasse left Belgium and settled in Paris where he developed a strong friendship with Constantin Brancusi, and with Robert and Sonia Delaunay which proved crucial to his colouristic development. Sonia especially was a staunch defender of Lacasse’s work and role as pioneer.
Recently discovered correspondence between Delaunay and Lacasse sheds new light on his relationship with Poliakoff. While Poliakoff remained a figurative painter until 1938, Lacasse had already gone through years of Abstraction. The considerable likeness between the works of Lacasse and Poliakoff has given rise to a great debate during the 1950s and 1960s. Now it is established that Lacasse is the defining influence on Poliakoff. 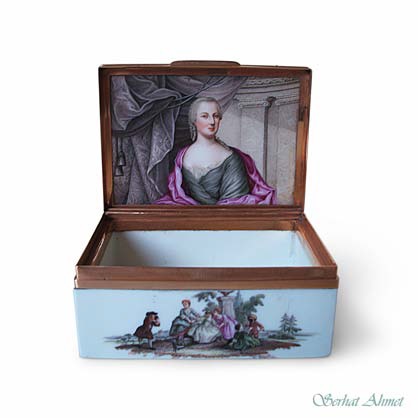 In the 18th century, an elaborate snuff box such as this gold mounted Meissen example was a lavish trinket for a loved one. It is painted with scenes of children playing make believe games copied from prints after paintings of the Commedia dell’Arte by French artists Jean-Antoine Watteau and Jean-Baptiste François Pater. The interior is painted with a portrait of Maria Josepha Carolina Eleonore Franziska Xaveria (1731-1767), daughter of Augustus III, a Duchess of Saxony, who became Dauphine of France after she married Louis de France, son and heir of Louis XV.
The Dauphine was a fan of Meissen, adorning her rooms at Versailles with porcelain from the factory. She even commissioned Meissen’s master modeler, J.J. Kaendler, to make porcelain memorial busts of her two eldest children following their childhood deaths. Serhat Ahmet, who will exhibit this piece at the Fair, thinks certain elements of the painting are characteristic of Johann Jacob Wagner, who became Meissen’s director of painting in 1741. Namely, the delicate rendering of the Dauphine’s complexion and dress, and the use of a draped curtain, set away from the pilaster columned walls in the background, to create a sense of spatial depth within such a diminutive composition. 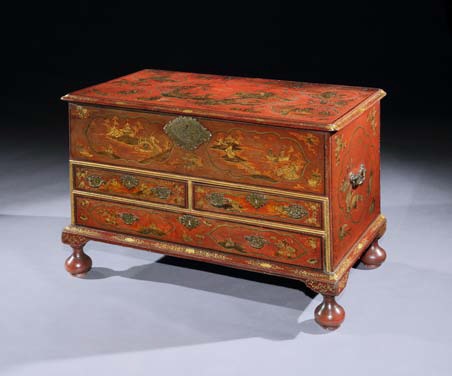 A George I scarlet japanned mule chest, English, circa 1720, from Mackinnon Fine Furniture.

An extremely rare and fine George I period scarlet japanned trunk. The lifting top decorated with various scenes of oriental figures in landscapes. The front, similarly decorated, with islands, bridges and fishing boats with an elaborate chased central escutcheon plate over two short and one long drawer similarly decorated and retaining their original brass handles and escutcheons. The sides decorated with sprigs of flowers and with original engraved lifting handles. The chest is raised on four turned bun feet. Glorious japanned decoration. 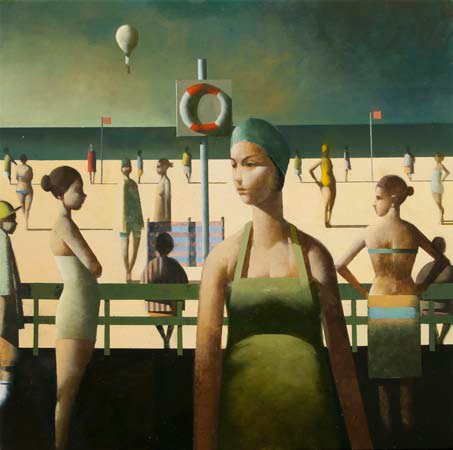 In 1994, the artist Stephen Mangan walked into Flying Colours Gallery, then located in Edinburgh. Rarely do artists’ chance visits to galleries result in them being taken on but Jane Houldsworth, founder of Flying Colours, was “instantly hooked” by his paintings. At the time, she “felt very brave taking him on as until then we had shown safe and easily digestible landscape and still life paintings.” But over 20 years later, the relationship is going strong and last year the gallery sold one of Mangan’s paintings to New York’s Metropolitan Museum of Art. Born in Edinburgh in 1964, Mangan studied fine art in Dundee and still works in Scotland today. His eerie paintings invariably depict groups of impassive, stylised figures in settings such as race-courses, harbours, theatres or stations. The 12-inch arch dial has an applied silvered Roman and Arabic chapter ring and a subsidiary seconds dial below XII. The dial centre is finely matted and has date apertures for lunar and day calendars. In the dial corners there are four subsidiary dials for repeat/not repeat and strike/no strike quarters at the top. In the bottom corners the day of the week and the month of the year are indicated.
The maker’s signature is signed in large script on a horizontal plate at the bottom. Under the moon is the inscription ‘Tempus Rerum Imperator’ (Time is ruler of all things).
In the arch is a moon phase dial with a tidal dial on a raised semi-circle above it. The oak case is decorated with exceptional lacquer work on green, red and gilt panels set within a cream background. The bridge top trunk door has a central roundel with a complex foliate shaped panel top and bottom. Depicted are adult figures and children at a banquet, horses and their riders, running hounds and other human figures outside an oriental pavilion beside a lake.
The substantial high-quality 8-day three train movement strikes the quarters on 3 bells and the hours on a single bell and there is a centre seconds hand in addition to the hour and minute hands.
This remarkable clock features on the front cover and on page 138 of ‘Norfolk & Norwich Clocks and Clockmakers’ edited by C & Y Bird. It is also illustrated with a later cresting on page 211 of ‘The Wetherfield Collection of Clocks’ by Eric Bruton and is listed in Britten’s ‘Old Clocks & Watches and their Markers’ as a ‘Splendid long-case chiming clock, with lacquer decoration, phases of the moon and time of high water in arch, about 1740, Wetherfield Collection’. 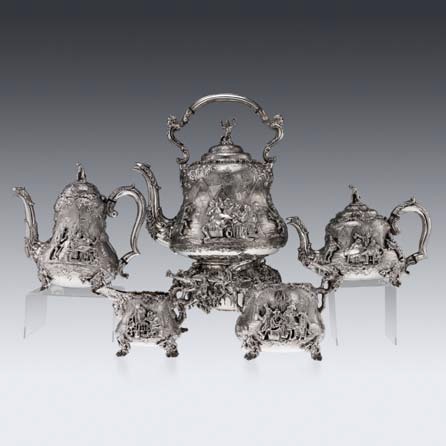 Antique 19th century Victorian solid silver magnificent and impressive five-piece tea and coffee set, comprising tea kettle on stand, coffee pot, teapot, sugar bowl and milk jug, each very heavy and impressive, each pear-form body with chased and applied rustic scenes of peasants merry-making, in the style of the Dutch painter David Teniers. Some of the handles are cast as a drunken peasant perched on a tree branch, figural finials with drunken peasants sitting on barrels. 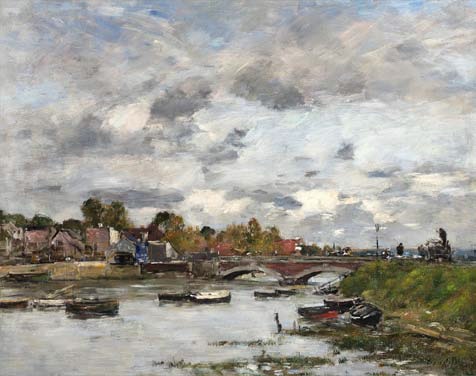 Painting onsite, Eugene Boudin vividly captures a blustery day on the Touques River in Calvados in coastal Normandy. This was a favoured spot for Boudin, a pioneer of en plein air painting, where the river meets the English Channel between the seaside towns of Deauville and Trouville sur Mer.
Through his loose brushwork, Boudin conveys a sense of both the weather and bustling activity; two horse drawn carriages crossing the bridge, a fisherman walking along the river bank, a workman standing on his tilted cart, surveying its load. 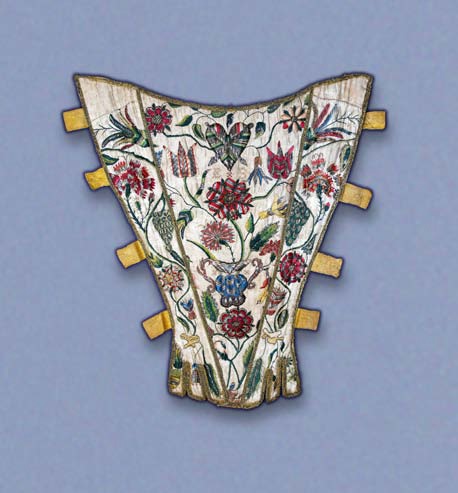 Stomachers, the triangular piece of decorative cloth, worn over the chest and stomach by men and  women, became popular in the 16th century. They were in and out of fashion during the 17th and 18th centuries in Europe and North America and styles varied.
This rare boned stomacher is worked with metallic threads and silks. It remains remarkably brightly coloured despite having survived over the centuries.