Oxfordshire antiques business, WR Harvey, is celebrating 65 years with the publication of a book commemorating the company’s history alongside personal anecdotes about life in the trade.

The book’s publication, which will coincide with their autumn selling exhibition, will reveal the many important items that have passed through the business, chosen by proprietor David Harvey. 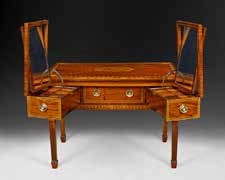 Among these is a personal favourite of David’s, Mrs Rudd’s Dressing Table, which will be for sale in the autumn exhibition.

An extraordinary table, it is connected to the life of the courtesan Margaret Caroline Rudd, about whom two recent books have been published that reveal her turbulent story of intrigue and deception in mid-Eighteenth century England. Mrs Rudd
enjoyed a colourful lifestyle with many admirers and was said to have had affairs with such luminaries as John Wilkes, James Boswell and Samuel Johnson. Unfortunately, her actions also caused two men to go to the gallows in a society scandal for which she is chiefly remembered.

The dressing table is believed to have been designed and made for Caroline Rudd for her home in Harley Street by George Hepplewhite. Drawings for the table feature in The Cabinetmaker and Upholsterers Guide which gave the author’s name to a whole period of designs from the last two decades of the 18th century. Harvey’s acquired and sold the table firstly in 1983. It came back in to stock a few years later when the company were in Old Bond Street. It was quickly sold again and went to a collector in
Vienna. Now that owner has asked Harvey’s to find another home for this superb piece, which is priced at £65,000. 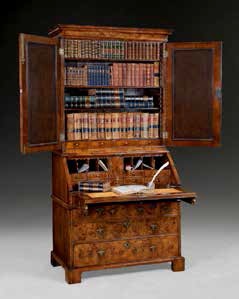 Among many other pieces in the selling exhibition will be a superb Queen Anne burr walnut bureau bookcase that has come back to Harvey’s after selling it in 1984 to a family in New York. It will be on sale for £16,950.

Equally superb is a fine early 19th century mahogany partner’s desk that was previously sold to a Swiss doctor who added a baize lining to the drawers for the safe keeping of his medical instruments. It will be on sale for £12,000.

Recent acquisitions include a stunning George III lacquered Tavern Clock that once hung in the company’s Bond Street premises thirty years ago before finding a new home in Guernsey. The family have lately relocated to England and no longer have the space to display such an impressive piece. It will feature prominently in the Autumn Exhibition with a price of £25,000.