The single-owner collection of entrepreneur and businessman, the late Robert White, went under the Bonhams hammer to achieve £3 million. Proceeds from the sale of thee collection will be used to build new cancer facilities at Poole and Dorset County hospitals, benefiting patients across the whole of the country. 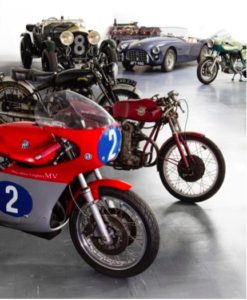 Bonhams Co-Chairman, Malcolm Barber, said that the sale “attracted bidders from all across the globe, seeing just shy of 100% sold, and £3 million achieved. As auctioneer of the sale, I’m delighted that after ten hours on the rostrum the sale has achieved such excellent results.”

Elsewhere, a rare, handmade British watch from bespoke horologist, George Daniels, soared to more than twice its estimate, achieving £224,500 – a world record price for the model.  The 35th Anniversary George Daniels watch took three years to design in conjunction with Roger Smith, and is one in an edition of just 35 ever made.

Debbie Fleming, Chief Executive of Poole Hospital NHS Foundation Trust, said: “We’re so grateful to Robert for his immense gift, which will be of benefit to patients for years to come.”

“Robert curated a fantastic collection, with beautiful items desired by collectors around the world, so it’s of no surprise that the sale has done so well,” said Ben Walker, Bonhams Head of Motorcycles and head of the auction.