An outstanding, and highly sophisticated, joined oak bedstead from the time of Elizabeth I is one of the leading pieces at Bonhams Oak Interior sale in London on 28 September. It is estimated at £100,000-150,000. 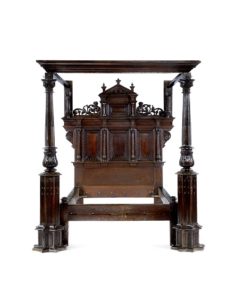 Dated 1570, the bed is strongly associated with Sizergh Castle in Cumbria, home to the Strickland family from the 13th century until 1950 when the estate was donated to the National Trust. Sir Walter Strickland greatly expanded the castle during the reign of Elizabeth I, and his wife Alice oversaw the interior decoration including the installation of the Inlaid Chamber, an internationally important example of the art of wood panelling.

Two beds at the castle, dating from the mid to late 1500s, bear a strong resemblance to the bed in the Bonhams sale, cementing its association with Sizergh. Tradition holds that the dated furniture and fixtures at Sizergh were made by immigrant, probably Flemish, artisans. It is possible, however, they were instead made by English craftsmen, and research is continuing to establish whether or not the castle housed an on-site, ‘Sizergh Workshop’.

The sale also features a magnificent and rare painted walnut and pine boarded chest dating from the first half of 16th century. It is estimated at £150,000-250,000.

The chest was almost certainly made in Italy, or by Italian craftsmen elsewhere in Europe, sometime between 1510 and 1540. It takes the form of an ancient Greek or Roman sarcophagus and is decorated in the Renaissance style known as all’antica i.e. drawing on the designs and motifs of the ancient world.

Although chests of this shape were often given as betrothal gifts from a groom-to-be to his prospective bride, the decorative details of this particular example suggest a religious function. The painted decoration to the underside of the lid, for example, – gold stars against a blue sky – is a scheme also found on painted ceilings of churches and chapels of the same period. It is most likely, therefore, that it was a mortuary chest, used to house relics or bones.

Bonhams senior furniture specialist, David Houlston, said, “These are wonderful and very different examples of craftsmanship from the first and second halves of the 16th century when economic expansion in Europe was reflected in a growing market for high quality objects.”