An unassuming small vase bought at a car boot sale looks set to prove a great investment for the buyer when it comes up for auction at Salisbury-based auctioneers, Woolley & Wallis next month with an estimate of £10,000-£20,000. 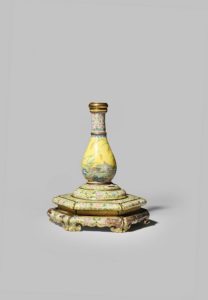 Bought for just £10 and extensively damaged, the owner originally listed the item on eBay, but was astonished when bidding soon rocketed over the £10,000 mark.

Wisely, he decided to withdraw the vase and sought advice from John Axford, head of the Asian Art department at Woolley & Wallis. The expert quickly spotted the four character Qianlong mark of the period 1736-95 on the small ‘two quails’ vase. He also revealed that the item is from the Beijing Imperial Palace and would have been made by Imperial command in the palace’s workshop.

The vase has a slender pear-shaped body painted with two quails beneath millet and blue rocks on an Imperial yellow ground beneath a border of small blue ruyi heads and a central gilded collar. The cylindrical neck with a formal flower and leaf scroll on a pink ground, together with, and attached to, a hexagonal enamel base painted with further flower heads and leaf scrolls on a yellow ground raised on six lingzhi-shaped feet, the remains of a paper label, the vase 12cm, 20cm (overall) 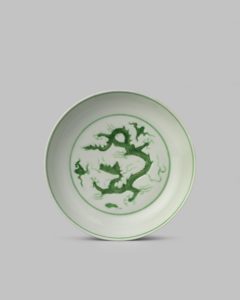 A Christmas present for the former owner of Castle Drogo, Basil Drewe’s wife purchased the Chinese porcelain dish as one of a pair in 1932 for the princely sum of £35, and they have remained in the family ever since.

It was only when the dish was brought to the salerooms that a tiny detail was obscuring the true nature of its history, relating to a 16th century Chinese Emperor.

With the aid of a magnifying glass John Axford noticed that the four-clawed dragon depicted on the dish had once had an extra digit. Since the five-clawed dragon was a symbol only used in the Imperial workshops, it is likely that the dish was made for the Emperor Zhengde during his reign of 1506-21, and that the fifth claw had been ground off the dish at some point in its history to disguise this fact.

Discovering that the dish was made for Chinese royalty rather than a wealthy commoner increases its value substantially and it has now an estimate of £30,000 – 50,000.

The items will be sold in the auctioneer’s Asian Art sale on November 15th.