When metal detectorist Lee Rossiter met up with his friends from the Yorkshire Searchers Metal Detecting Club on Sunday, 19th April 2015, he didn’t expect to find more than a couple of coins at the very best. 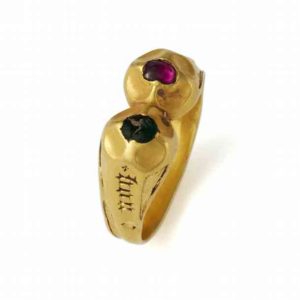 Lee, a technical writer, had only started metal detecting about 18 months earlier when he bought a basic metal detector on eBay because he thought his daughter may like it. Turned out she didn’t, but he got rather interested in it himself and soon joined his local club.

On this particular April day, it was a lot colder than expected and Lee walked back to his car to get his coat, but on his way over, his metal detector went off. He soon found a golden ring in the field close to a stream, where it may have been in the ground for a good 500 years. Lee said: “I got really excited, so far I had only found the odd silver coin, but this looked like a proper piece of jewellery, which seemed to be made of gold. One of my friends said it was far too yellow to be real gold and looked like costume jewellery, I should just throw it away. But the ring was relatively heavy and I thought I better ask our dig organiser, Stuart Littlewood. Luckily he confirmed that this was definitely an antique ring, most likely Tudor Gold.”

Legal procedures then began. The Green Hammerton Ring, named after the area where it was found in North Yorkshire, was submitted to the British Museum by the local ‘Finds Liaison Officer’. The magnificent 15th century double bezel chased finger ring in the form of a flower is set with two stones. It is engraved in Medieval French “ne mem – bon” with a heart at the end. Non-destructive X-ray fluorescence analysis of the metal of the ring carried out by the British Museum’s Scientific Research section indicated a surface composition of approximately 78-80% gold, 11-13 % silver, with the remaining metal being copper. The red stone was identified by Raman spectroscopy as red corundum (ruby), and the green stone as green beryl (emerald).

Similar rings are on view at the Victoria & Albert Museum and some have come up at auction in recent years, so it was immediately clear that this was a fairly important ring and would have belonged to an individual of high status. As the Green Hammerton ring is in good general condition, the Love or Marriage Ring was declared a treasure. Although there had been lots of interest from museums, none of them were able to raise the funds to purchase it, including the local Harrogate Museum.

In such cases the jewellery is then returned to the lucky finder. Lee spoke to the landowner to get his full blessing and also suggested to share the proceeds of a potential sale. Lee then made enquiries how best to find a buyer for his precious discovery.

He decided to contact Cheshire-based independent auctioneer and valuer, Mark Littler, who had been recommended to him as someone who could help him find the best way to sell such a special object – whether that was through an auction house or directly to a dealer or collector.

Mark said: “I was excited when Lee first approached me as medieval jewellery is more often found in museums, not fields. I knew immediately that this was an important find and would require some thought as to how best to sell it. It was decided that an auction might not be the best course of action as the ring would be worth more to a private collector if it had not already been presented to the market.

“Wartski, in Mayfair, have been supplying the Royal Family with jewellery for generations and I knew they had always been strong buyers of medieval jewellery. I contacted them and negotiated a private treaty sale for a five figure sum for my client which was a great result.”

Kieran McCarthy, director of Wartski, was delighted when Mark approached him with Lee’s find: “We have a strong interest in medieval rings and were thrilled to have the opportunity of purchasing this one. Jewels of this calibre are extraordinarily rare and it is magical when the ground presents them as gifts to those who look for them.”