A sketch for a work by John Constable leads Bonhams Old Master Paintings sale in London on 8 December. Flatford Lock on the Stour looking towards Bridge Cottage is estimated at £200,000-300,000. It has been in a private collection overseas for many years and was unknown to Constable scholars. 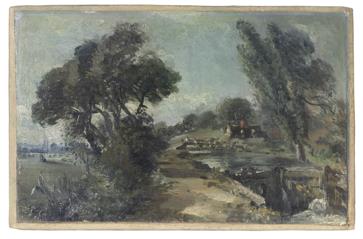 The finished painting, Landscape: Boys Fishing was Constable’s submission to the Royal Academy in 1813. The completed work, which measures 40 x 50 inches, is, however, now in a poor state of preservation and the details of the picture are largely known from a mezzotint and from four other preparatory oil sketches.

Bonhams Director of Old Master Painting, Andrew McKenzie said, “The exciting re-emergence of this magical small canvas must now be regarded as the most substantial surviving record of the exhibited work.  At just under seven by ten inches it conveys all the brilliance of Constable’s full-scale masterpieces.”

The view shows the reach of the Stour between Flatford Lock and Bridge Cottage – a setting that remained close to Constable’s heart all his life. This scene, which he knew so intimately, is today one of the most iconic in British art. Flatford Lock, depicted in the right foreground of the painting was first constructed in its wooden form in 1776 – the year Constable was born. The family living in Bridge Cottage, seen here beyond the lock, were the tenants of the artist’s father, Golding Constable, a Suffolk entrepreneur.

Constable’s single-mindedness in repeatedly portraying a limited range of favoured sites such as Flatford Lock, was unprecedented in British art and ultimately enabled him to raise the status of landscape to the equal of history painting.

The sketch was in the collection of Isabel Constable, the artist’s last surviving daughter and is likely to have been included in the sale of her estate in 1891 and 1892 or possibly have formed part of the bequests to her nephews. (She gave more than 400 Constable oils, watercolours and sketches to Victoria and Albert Museum) The work was sold in the early 1940s by Old World Art Inc., New York to the collector and philanthropist, Viola Bray. It remained in her personal collection, out of public view, until her death in 1961 and passed by descent to the present owner.