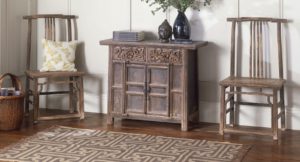 1 While antique Chinese chairs can be animated and elaborate, more commonly they are known for visual restraint, clean lines, and supreme elegance; a visual feast designed to be viewed in three dimensions.

2 The humble stool was the precursor to sublime Chinese chairs, and there were two routes of entry for it into Chinese culture: first, interaction with the nomadic tribes of the Altai region of Siberia and second, the influx of Buddhist monks from India.

3 It was during the Tang and Five Dynasty’s period (618-960) that the raised, seated lifestyle was firmly established in courtly circles.

4 By the 12th century mat level living and floor level seating was rare anywhere in China. In adopting seating and the raised level of living, China had more in common with Western cultures than its Asian neighbours. 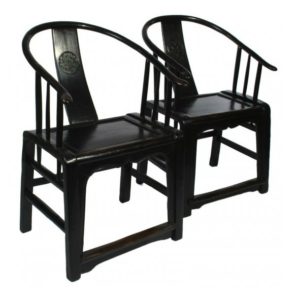 5 Woodblock prints and paintings of the Tang dynasty (618- 907) clearly show stools, side chairs, yoke back armchairs, and round back arm chairs. Thus the basic forms of the chairs we see today were established relatively quickly.

6 The proliferation of chairs continued in the Northern and Song dynasties (960-1279), with depictions in paintings and woodblock prints showing all types of high furniture throughout most circles of life in China.

7 Once the basic formats of the chairs were established, they evolved to the wonderfully restrained, elegant and refined chairs of the Ming period (1368-1644).

8 The lifting of a ban on maritime trade in 1567, which led to the import of the most valuable tropical hardwoods from South East Asia allowed craftsman to create more open, elegant sculptural forms that were previously unattainable using traditional soft woods. 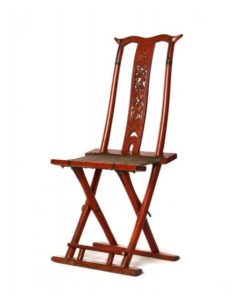 9 The stratification of society under the emperor, and the rise of a scholar class led to increased importance being placed on the hierarchy and rank of seating in China; where one sat and what one sat on was a direct reflection of the status of the sitter.

10 Upholstery was never built into Chinese chairs. The only concession to comfort was the use of woven cane seat pans, which reflected higher status, and also had the advantage of being somewhat cooler to sit on. Chairs were covered with fabrics or animal skins, with the more valuable being used for the comfort of the most important guests or any of the senior members of the household.