Sworders launched this dedicated auction in April 2016 to much acclaim, topping the results with the £85,000 taken for the stunning signed and dated watercolour by Eric Ravilious, The James and The Foremost Prince.

Sworders managing director Guy Schooling, who has built up close links with the artists of nearby Great Bardfield, including the families of Ravilious and Edward Bawden, had predicted at the beginning of the year that 2016 would see the rise of the lesser known leading Modern British artists, and so it has proved.

Now Sworders bring a mix of established names and artists whose star is on the rise once more to this latest sale.

Among the highlights is Pont du Gard, a signed oil on canvas by John Aldridge (1905-83) showing the Roman aqueduct crossing the river in southern France. Aldridge is one of the names from the Great Bardfield group of artists that Guy Schooling is keeping in his sights as showing great promise.

Already considerably more established among the Great Bardfield artists is Edward Bawden, whose linocut of Liverpool Street Station comes with price tag of £10,000-15,000.

Edward Wolfe (1897-1982) was a South African-born British artist whose work can be found in the Tate and the National Galleries of Scotland. A graduate of the Slade, he was friend and colleague of Roger Fry. This sale will offer Still Life with Flowers, a signed oil on board guided at £4000-5000.

Still lifes are the type of painting usually associated with Mary Fedden (1915-2012), who has been a mainstay of British art fairs for the last few years, and whose prices have risen steadily at auction. Here, though, Sworders offer a portrait of her husband, the artist Julian Trevelyan, set against the French landscape. Julian in Normandy is a charming naïve work that shows the bearded Trevelyan on the quay of an unnamed fishing village, net and fish in hand. It comes estimated at £2500-3000. 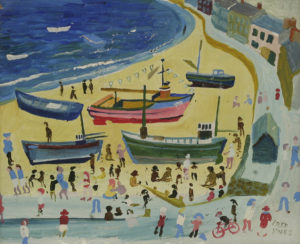 A master of the naïve form was Fred Yates, who has two works in the sale so far. The first, Figures on a Beach, possibly St Ives, Cornwall, is a busy and colourful seaside scene and exactly the sort of Yates composition that collectors look for. It is signed and pitched at £2500-3000.

The other Yates is a far more finished and detailed still life of a vase with flowers set upon a stool, another signed and highly colourful piece expected to fetch £1000-1500.

Wilhelmina Barns-Graham (1912-2004) had close links with Cornwall, moving there in 1940 to escape the war. The choice was pivotal to her career as she fell in with Alfred Wallis, Barbara Hepworth and Ben Nicholson, among others, and became a member of both the Newlyn Society of Artists and the St Ives Society of Artists.

Carnival, a work from 1968 on offer in Sworders’ sale, comes from the period when she moved towards a far more abstract and geometrical form of painting. Signed and dated, the oil and cryla work carries hopes of £2000-3000.

Duncan Grant (1885-1978) is rather better known already, not least as a member of the Bloomsbury Group. His signed and dated Still Life of Four Bottles, offered here, comes from the final period of his life in 1973, and displays a mastery of light and colour in its impressionistic, broad brushstrokes. Acquired by the artist’s accountant, Henry Madams, and consigned by Madams’ heirs, it comes at a competitively estimated £800-1200.

Finally, Bernard Meadows (1915-2005), a Norwich-born member of the Geometry of Fear school, went on to become Professor of Sculpture at the Royal College of Art from 1960 to 1980. Sworders have accepted the consignment of an untitled bronze relief sculpture, mounted on board, which was cast in 1961. The 14in (36cm) high piece is expected to fetch £4500-6000.

“We have lots more to unveil in the auction, which we expect will reinforce the notion, once more, that there is a long way to go with Modern British Art in market terms,” said Guy Schooling. “The range of styles and subjects, together with the multitude of influences on these artists who often worked during key moments of historic change, demonstrate how periods of instability and upheaval can often generate the most inspiration.”