The Pavilions of Harrogate Decorative, Antiques and Art Fair starts on Friday this week with a huge range of art and antique items on sale, ranging from classic and 20th century jewellery, silver and ceramics to fine paintings, period furniture and antiquarian maps and prints.

With so much to see, we’ve pulled together just three items that look set to tempt buyers. 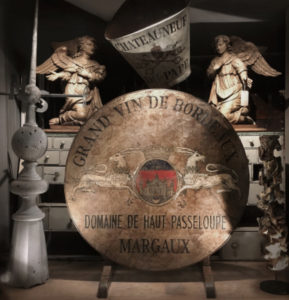 A French wine tasting table (right) belonging to Harrogate antiques dealer Chris Holmes which dates from  the late 19th century. It is made from poplar wood and would have been used extensively in its day for wine tastings and post grape collection celebrations. Decorated with a picture in the centre of Bordeaux’s city symbol, it is priced at £2,400. 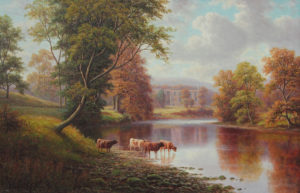 An oil on canvas of Bolton Abbey in North Yorkshire (left) signed by the artist William Mellor (1851-1931). Born in Barnsley and the son of linen weavers, Mellor started his own career in the weaving industry before becoming a landscape painter in 1881. His work meant that his family moved regularly around the country to gain commissions or patronage. Painting in watercolour and oils, he is said to have been taught by his father, Joseph, and they share a similar and typically Victorian style. Subjects range from North Wales, through Yorkshire, Cumbria and Northumberland to the Scottish borders. Mellor’s favourite season was autumn and he is highly regarded for his delicate treatment of leaves and foliage. The 20 x 30 inch painting is offered for sale by Walker Galleries for £7,500. 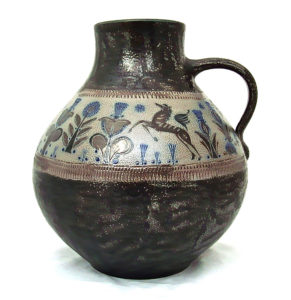 A fine German salt-glaze floor vase decorated in scraffito by Wim Mühlendyck with a very stylised modernist design. Mühlendyck was born in Porz-Cologne, German in March 1905, attending the Hoehr-Grenzhausen Ceramic School from 1927 to 1930. He ran his own workshop & pottery in Hoehr-Grenzhausen from 1931 to the 1970s and was considered the reviver of Westerwalder ceramics, winning many awards in his lifetime. The bulbous jug is 38cm tall and made circa 1976. It is to be shown by John Newton Antiques from East Yorkshire with a price of £695.