The top seller at Hansons‘ recent Decorative Arts auction was a unique studio pottery Wedgwood chess set made by John Dermer in 1972, which attracted significant interest from internet and telephone bidders, eventually selling for £5,000.

The sale included items from an important collection once owned by the great potter William Moorcroft, which attracted collectors and enthusiast from across the world. Other collections included Clarice Cliff and contemporary ceramics by Lorna Bailey, all selling within or over estimate. 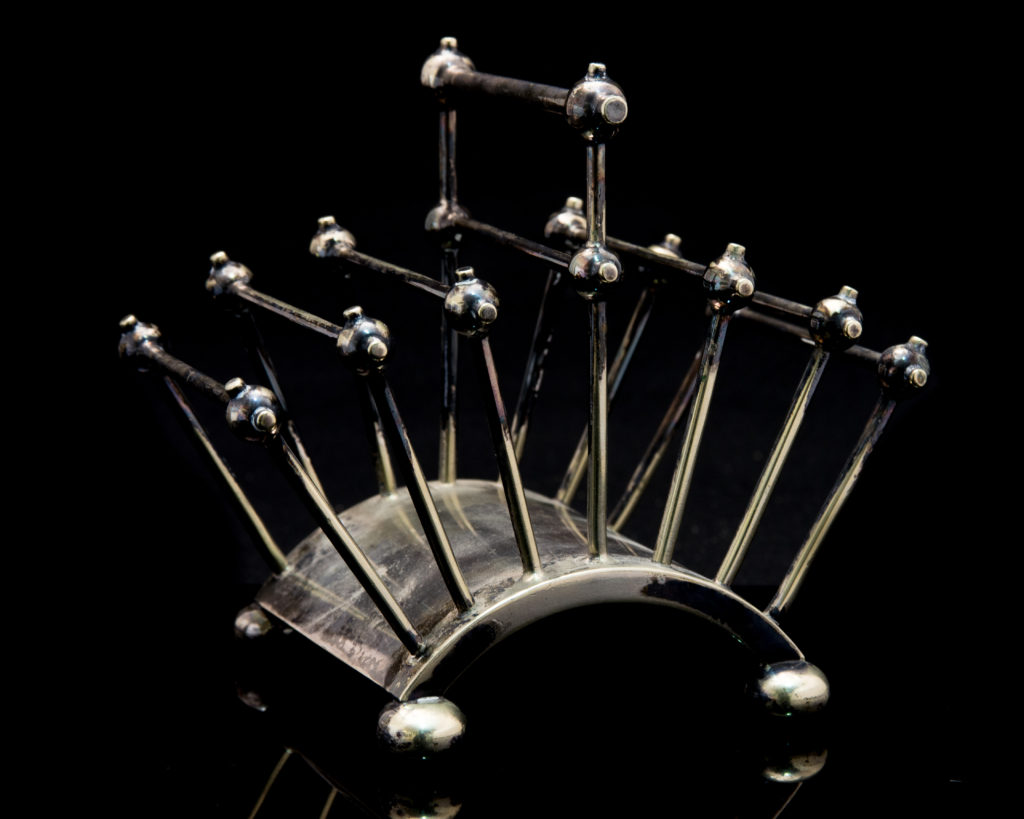 The sale started with plate and silver. A Christopher Dresser toast rack (above) made £440, while enamelled items seemed to be more popular than ever with a small German silver pill box selling for £200 and vanity set reaching £520.

Jewellery from Arts and Crafts to modern attracted strong attention, with a Murrle Bennett brooch and an Arts and Crafts opal pendant making £260 and £330 each. Scandinavian jewellery also proved popular, as a Georg Jensen silver necklace, by Edward Kindt Larsen sold above estimate at £680.

The highlight of the pen section was an iconic Dunhill Namiki fountain pen, lacquered with a gilt praying mantis. Competition from the room and internet saw the pen bought by a bidder in the Far East for £2,900.

In the ceramics section, which included items from William Moorcroft’s personal collection and some rare Clarice Cliff, a small set of Aesthetic Movement tiles made £300 and a Hannah Barlow jug did equally well. Art Deco colour caught the attention of 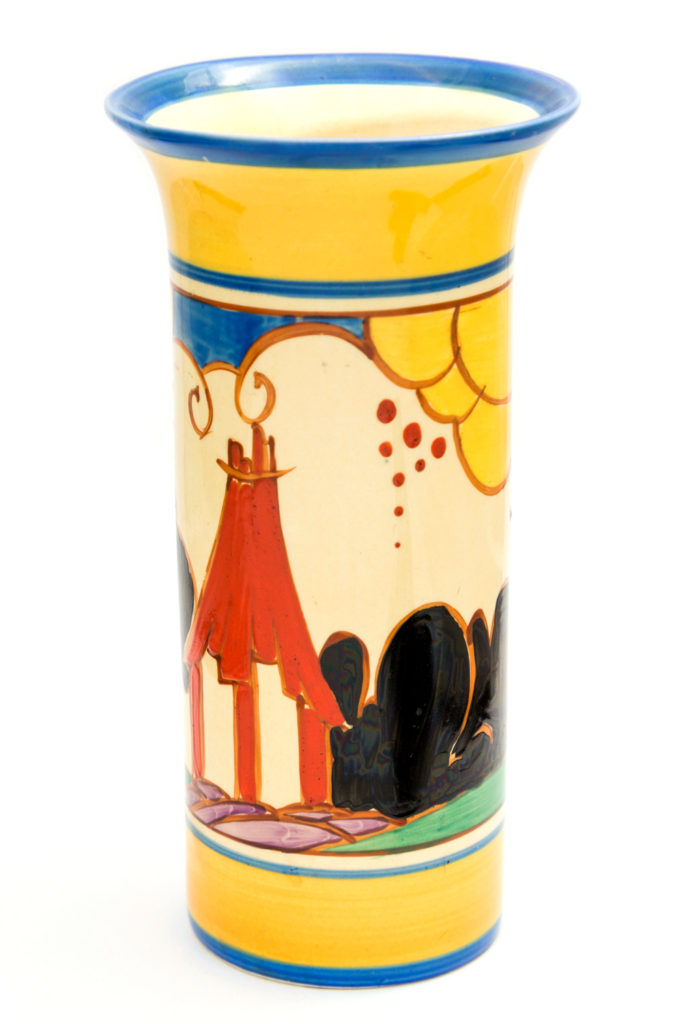 many bidders with a Summerhouse vase by Clarice Cliff making £880, a small Avignon sugar bowl reaching £330 and a 358 shape vase selling to the internet for £940. A large collection of contemporary ceramics by Lorna Bailey also attracted a great deal of interest, all selling over estimate. Highlights of the Moorcroft ceramics collection included two Liberty mugs, signed and dated 1914, which made £280 and £310 each. The popularity of later pottery and studio ceramics remained high; a large Troika wheel vase got the bids rolling up to £420, before the glass section, every lot of which sold.

A quintessentially Arts and Crafts, Art Nouveau style Liberty pewter and enamel timepiece caused a great deal of excitement before the auction. It eventually sold to a room bidder for £2,900, over its original estimate. Part of William Moorcroft’s personal possessions included two enamel plaques in plated mounts by the Duchess of Sutherland Cripples Guild. The slightly damaged example sold above estimate at £1,000, while the PreRaphaelite woman made £2,600 with the same buyer. 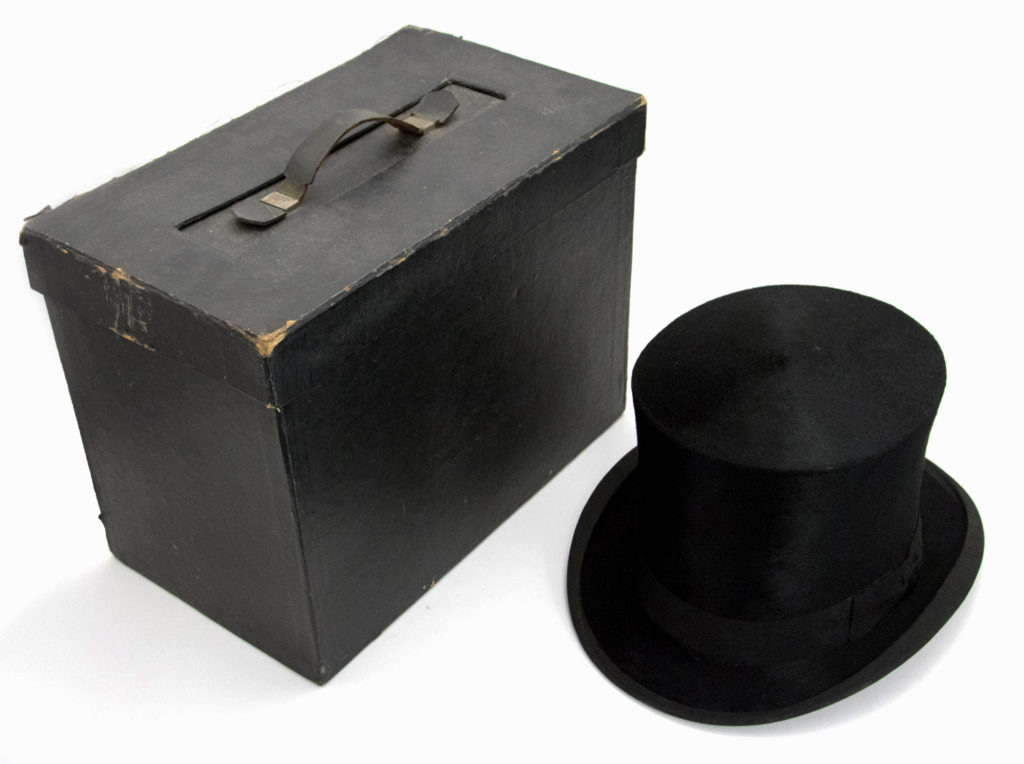 One of the highlights of the Moorcroft collection which had a very personal connection to the man himself was his silk top hat (with box), worn by Moorcroft in the first half of the 20th century. After much competition it sold for £840, while an extensive collection of photographic plates with Moorcroft designs for Macintyre and Liberty made £1,100.

Signed Lowry prints continue to do well. Both sold for £1,900 each. In the furniture section, 1950’s and 1960’s furniture, including G Plan pieces by Ib Kofod Larsen, sold well, as well as Ercol and Guy Rogers. An unusual set of steps from Liberty department store, in well used condition and bearing a Liberty stamp, sold for £300.