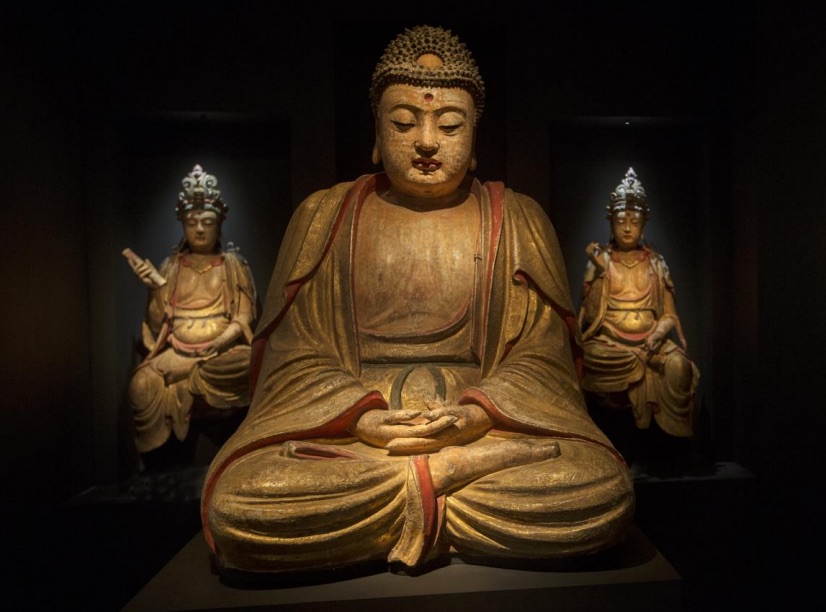 Works of extraordinary provenance and quality take the lead, say the organisers of this year’s TEFAF Maastricht, the leading fine art and antiques fair, which takes place at the MECC (Maastricht Exhibition & Congress Centre) from 10th to 19th March.

TEFAF Maastricht says it provides an unrivalled market place for the worlds leading dealers and specialists to present the finest works available, covering over 7,000 years of art history. In addition, a number of works are being offered for sale for the first time in decades bearing testament to the dealer community’s ability to source the most exciting works on the market.

TEFAF Antiques, the largest section of TEFAF Maastricht, provides visitors with a host of exceptional and art historically significant decorative works. Histoire Ancienne jusqu’à César and Fait des Romains, c.1370-80, illuminated manuscript on parchment with 78 miniatures by the Master of the Coronation of Charles VI, is coming to TEFAF Maastricht courtesy of Les Enluminures. It is an historical chronicle of immense size and one of the greatest historical accomplishments of the late Middle Ages. The provenance of this work is exceptional having been in the Valois court in the 14th-century, the collections of modern bibliophiles (Chester Beatty, William Hearst and James and Elizabeth Ferrell), and most recently the J.Paul Getty 2 Museum, where it has been on long-term loan. The asking price for the manuscript is US$4.5 million. 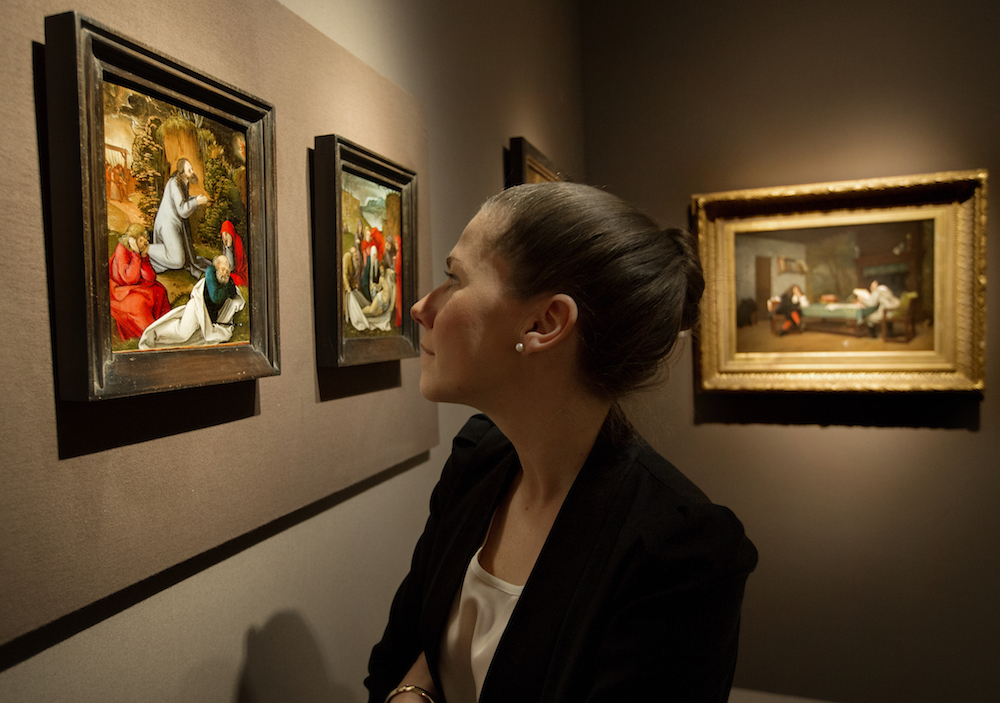 Julius Caesar, c.1551, limewood with walnut socle, is the earliest recorded work and only surviving wood sculpture by master sculptor Giambologna (1529-1608), which is brought to market for the first time in 25 years by Tomasso Brothers Fine Art. An extraordinarily important work, Caesar is depicted in a classical nude pose but is modelled using fine, typically Northern European woodcarving techniques.

Classical Asian decorative arts are well represented throughout TEFAF Antiques. At the heart of Vanderven Oriental Art is a monumental seated Buddha, China, late Yuan/early Ming dynasty, 14th-century, which comes to market from a private collection, and has an asking price of €1 million. The Buddha is seated in the ‘padmasana’ lotus position with his hands in ‘dhyana’ mudra, the gesture of absolute balance.

Also within TEFAF Antiques are some of the leading dealers in antique jewellery. Hancocks is presenting a selection of extremely rare signed jewellery pieces including a stunning Edwardian diamond tiara which belonged to the Spencer family. The tiara was given to Lady Delia Spencer, great aunt to Princess Diana, by her father the 6th Earl Spencer, on her wedding day on February 18th, 1914. The tiara is set with more than 800 old cut diamonds, estimated to weigh a total of 48 carats.

In addition, S.J. Phillips are bringing a 1930’s Burmese ruby and diamond cluster panel necklace by Cartier, New York. The design curves perfectly, whilst the variety of cuts of stones included (brilliant, round, square, baguette, sugar-loaf, cabochon, kite and trapezium) combine to catch the light when worn. The asking price for the necklace is £4.2 million. A master work by René Lalique (1860-1945) is the highlight of Wartski’s offering this year . The piece is a rare gold, enamel and moulded glass necklace in the Egyptian taste.

Complementing the offering of antique jewellery is TEFAF Haute Joaillerie, where seven of the world’s finest jewellers will present outstanding examples of craftsmanship and artistry. The exhibitors are Verdura/Belperron, Van Cleef & Arpels, Reza, Otto Jakob, Chopard, Hemmerle and Wallace Chan. Of particular note are the jewelled sculptures by Wallace Chan, such as Stilled life, brooch and sculpture, composed of a cicada, crafted from imperial jadeite which stands on bamboo alongside a bejewelled spider.

Old Master paintings is one of the strongest disciplines of the fair, and this year Salomon Lilian brings an imposing work by one of Northern Europe’s most important artists, Maerten de Vos (1532-1603); Allegory of the Seven Liberal Arts. In addition, Colnaghi presents, Still Life with Quinces, Apples, Azeroles (Hawthorn berries), Black grapes, White grapes, 3 Figs and Pomegranates, by Bartolomeo Cavarozzi (1587-1625) that appears to be a classical still life but under X-ray the canvas shows a depiction of the Virgin, Child and a Male saint.

Virtuoso excellence leads the way at Galerie Canesso, who is bringing Self-Portrait with a Turban, by Wallerant Vaillant (1623-1677). The detail captured in the turban of this captivating piece is extraordinary. The work is coming to market for the first time in over 25 years. In addition, Adam Williams Fine Art Ltd will present Portrait Of James Adam (1732 – 1794), 1763, by Antonio Zucchi (1726-1795), the only recorded portrait by Zucchi. Zucchi was commissioned by both James Adam and his elder brother Robert, and Zucchi’s abilities as a decorative painter are demonstrated in many of Adam’s most celebrated houses, including Harewood, Kenwood, Kedleston, Newby, Nostell Priory, Osterley and Saltram.

Works by leading artists from the canon of art history are presented throughout TEFAF Paintings. Dickinson is exhibiting a work by Paul Cézanne (1839-1906) – the delicate La Montagne Sainte-Victoire, c.1890. This watercolour on buff paper work depicts a classical scene for which Cézanne is renowned; it also has exceptional provenance having been in the collections of both Ambroise Vollard and Leo & Gertrude Stein.

Complementing the classical works in TEFAF Paintings is the modern and contemporary offering on show in TEFAF Modern and its sub-section TEFAF Curated. Galerie von Vertes will present an exceptional bronze sculpture, Large Slow Form, 1962 (cast 1968), by Henry Moore (1898-1986), which has been in a private collection since 1985. Another exceptional work is Topographie châtaine, 1959, by Jean Dubuffet (1901-1985), which has recently been deaccessioned by the Museum of Modern Art, New York and is being offered for sale by ApplicatPrazan. Also in TEFAF Modern, Galerie Henze & Ketterer will bring Portrait of Naila, 1934, by Max Beckmann (1884-1950). ‘Naila’ was the nickname for Hildegard Melms, a 26-year-old university graduate with whom Beckmann had a passionate though short-lived affair. The affair was an overwhelming experience for Beckmann and Naila would appear again and again in his works.

The 2017 dealer community at TEFAF Maastricht demonstrates the importance of context when presenting works of art as is evidenced through the number of themed stands this year. Daniel Crouch Rare Books tackles the idea of strengthening national frontiers and weakening international institutions through his exhibition ‘The myth of the European Nation State’ in the wake of Brexit. The exhibition will include 28 items to represent the 28 nations that currently make up the EU. 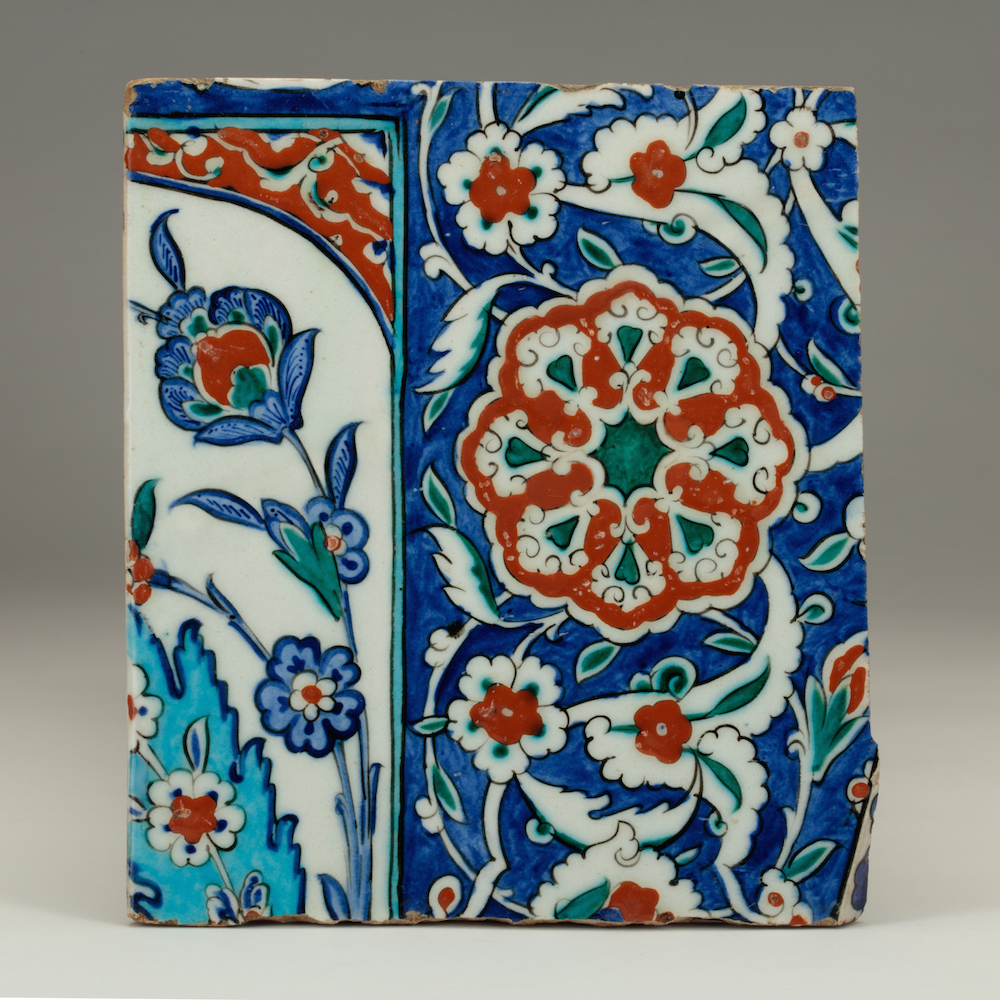 Lowell Libson Ltd is bringing to market for the first time a series of six decorative panels which were commissioned by Lady Diana Cooper in 1948/49 for Château de St-Firmin in Chantilly. Lady Diana commissioned Cecil Beaton’s protégé, Martin Battersby (1914-1982), to create these highly sentimental panels. Lowell Libson Ltd will present these works in a specially created room, showing them in a manner sympathetic to their original display. The asking price for the set is £150,000. Richard Green pays testament to the Dutch heritage of TEFAF Maastricht with its exhibition ‘The Pleasures of Life in Seventeenth Century Netherlands’. The gallery will create a simulation of a 17th-century room, furnished with the kinds of luxury goods depicted in the paintings on display. The gallery will present works by Jan Brueghel the Younger (1601-1678), Jacob van Hulsdonck (1582-1647), Jacob Ochtervelt (1634-1682), and Jan Fris (1627-1672).

Galerie Eric Philippe celebrates Swedish Grace on their stand for 2017. Their exhibition includes a collection of objects, lighting and pieces of furniture designed by well-known Swedish designers and architects such as Carl Malmsten (1888-1972), Axel Einar Hjorth (1888- 1959), Anna Petrus (1886-1949) and Uno Åhrén (1897-1977). A particular highlight is The Garden of Eden Cabinet by Åhrén, which was exhibited in the Swedish Pavilion at the Paris Exhibition of Decorative Arts in 1925. The section itself is the largest it has been with the addition of three new dealers, Jackson Design AB, Galerie Kreo and Modernity.

Tribal art has grown significantly as a discipline over the last decade at TEFAF Maastricht and is now in its own section within the fair, comprising nine specialist galleries. To celebrate 20 years of participating at TEFAF, Galerie Meyer-Oceanic Art, are gifting a Maori canoe bailer, carved by Raharuhi Rukupo in the 19th-century to the Museum Voor Voolkenkunde, Leiden. 5 The museum has been acquiring Maori works from the gallery since 2009 and this relationship provides a wonderful example of the sense of community the TEFAF Maastricht fosters. 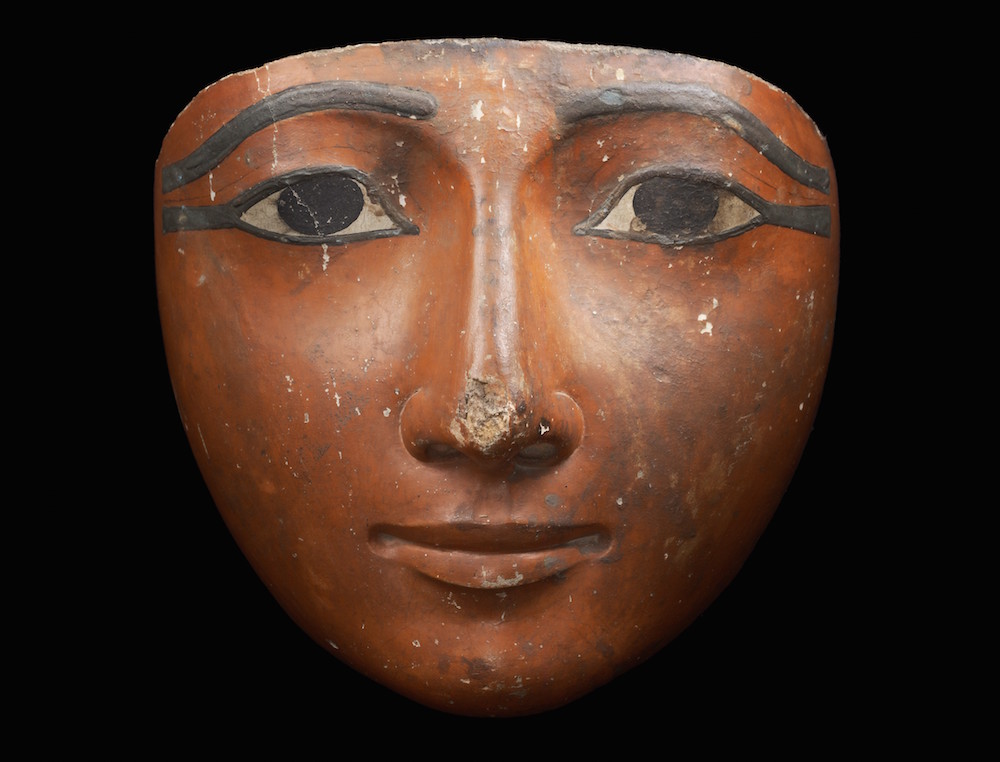 Next to TEFAF Tribal is TEFAF Ancient Art, where visitors will find some of the oldest works of art within the fair. Highlights include a Greek Griffin protome, from the Archaic Period, c.625-600 BC, presented by Charles Ede Ltd. This particular piece is exceptional and boasts an extraordinary provenance. Alongside this, Rupert Wace Ancient Art is presenting the Kasmin Collection of Ancient Hedgehogs, a collection of 11 hedgehogs which come in a variety of sizes and materials. The group was built by John Kasmin, the renowned art dealer. In addition, US dealer Merrin Gallery, is bringing Mask of Silenus, Hellenistic-Early Roman, first century BC-first century AD, which comes to market from a private US collection.

An area of rich cultural history can be found in TEFAF Paper with many historically significant works on display. Christopher Kingzett, will present Study of Sir Winston Churchill, 1954, by Graham Sutherland, OM (1903-1980), a powerful drawing which is a study for Sutherland’s famous portrait of Sir Winton Churchill. The portrait was commissioned by the Houses of Parliament in 1954 and presented at Westminster Hall in November that year. Churchill famously remarked at the ceremony that “the portrait is a remarkable example of modern art”. In private he was 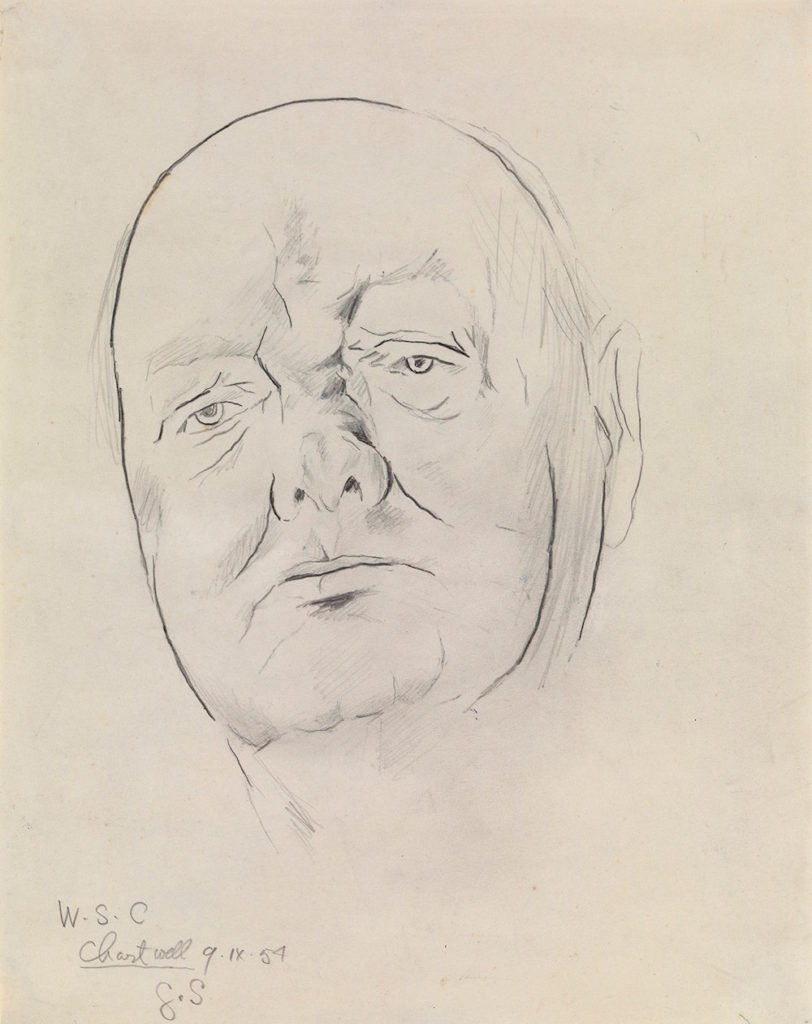 considerably less complimentary and his displeasure led to the portrait being destroyed by his family shortly after, making this study all the more important.

Galerie Johannes Faber is presenting a beautiful photographic depiction of a female nude. Entitled Nude Study, Tyrol 1907, this sensual work by Heinrich Kühn (1866-1944) is a highlight of TEFAF Paper. Emanuel von Baeyer-London is showing two impressions from a hitherto unknown set of eight trial proofs of Los Proverbios, printed between 1848-1850, by Francisco de Goya y Lucientes (1746-1828). There is only one complete set of trial proofs of Los Proverbios which are in the Museum of Fine Arts, Boston, making this set an important addition to the artists oeuvre.

In addition, Stéphane Clavreuil Rare Books, will present Divina Proportione, the first and only edition of one of the richest sources for studying the interplay between mathematics, art and architectural theory by Luca Pacioli, 1509. This folio comprises 61 illustrations after Leonardo da Vinci (1452-1519).

Five galleries are participating in TEFAF Showcase, the section that gives recently established galleries the opportunity to participate in TEFAF Maastricht for one year and to gain experience of being part of an international fine art event. This year the participants are Pampoulides, Renaud Montméat Art d’Asie, Elisabetta Cipriani, Tribal Art Classics, and Sokyo Gallery.

In addition to TEFAF Showcase, the fair is delighted to welcome 24 new exhibitors, who will further enrich and diversify the offering of TEFAF Maastricht. Included in this number is De Backker, who will present a collection of medieval art, including sculptures, bronzes, alabasters and paintings, and Galerie Delalande, who is displaying a special collection of rare globes, both in TEFAF Antiques; and Donald Ellis in TEFAF Tribal, who is presenting exceptional Native American works of art including the eye-catching Dance Mask from Kuskokwim River, Alaska c.1890-1905, crafted using wood, paint, vegetal fibre and feathers. The loan exhibition ‘Galleria Borghese – An Italian Legacy’, housed in TEFAF Paper, comes from the renowned Italian museum Galleria Borghese in Rome.

Treasures to be exhibited in the exhibition include a selection of highly significant Italian paintings and sculptures from the 15th- , 16th- and 17th- centuries. The Galleria Borghese is a lasting tribute to Scipione Borghese (1577- 1633), who used his position as Cardinal Nephew to his uncle Pope Paul V (1552-1621), to create one of the richest and most sought after collections of the time.