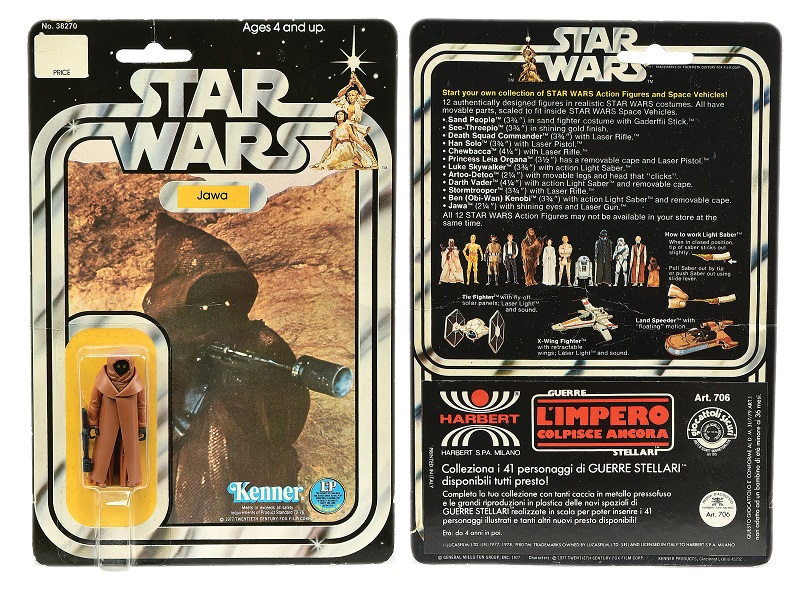 The 3 3/4-inch figure is described as near mint to mint condition, with its original packaging near mint bubble upon a good card back. It is thought to be one of the first releases of the toys in 1977. The thin flexible material used on these first wave of issues for the cape was similar to that used for the Darth Vader and Obi-Wan Kenobi figures. The Jawa was quickly withdrawn however with the rusty brown vinyl cape being replaced with a darker cloth robe which remained from then on. It has been reported that Kenner made the change as it felt that customers were  not getting value for money with the Jawa figure being half the size of any other figure, yet still selling for the same price. Their solution was to add the material robe which appeared more luxurious and therefore perceived added value.

It stands on a 12C card back, with a Harbert Guerre L-Impero Colpisce Ancora Art 706 sticker applied to rear. Each country had a different distributor for Star Wars products and this company held the licence to sell Star Wars toys in Italy. They are thought to have gone into administration in 1980, therefore making the backing card a scarcity too.

The figure had been owned by the vendor from new when he purchased it as a child from a stall on Bacup market in Lancashire. He said, “As a kid and Star Wars fanatic growing up in Bacup, Lancashire, I have memories of my mum taking me down to the local market every Saturday to buy me the latest figure that had been released. I had a friend who, like me, was obsessed with Star Wars and he told me about the Jawa and how a plastic cape one was coming out. I remember asking the market stall owner to get me one. It took him weeks to find it and he told me how hard it was to locate and rare, and for that reason I never opened it. It has never been opened, out of my possession or altered in any way.”