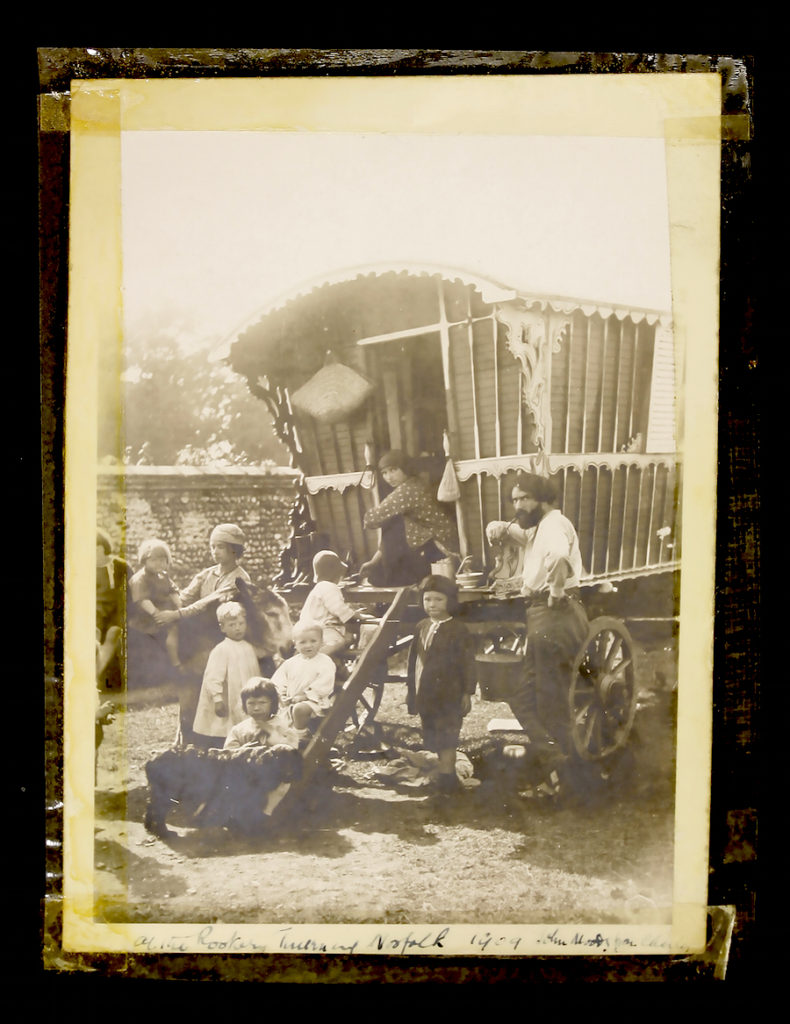 A striking photograph of the artist Augustus John and his family appears to call into question the dates of images held in the National Portrait Gallery archive.

The image from a celebrated archive was taken by the artist’s friend Charles Slade, who sat for John on a number of occasions. It is a contemporary print, presented by Slade to John decades later in 1953. It is captioned 1909, but possibly dates to several years before when the artist took to the road in this gypsy caravan with his wife Ida, mistress Dorelia and his children by both of them.

The photo shows John standing to the right, leaning against the caravan with his pipe in his mouth. Sitting in the doorway of the caravan is Dorelia, while the woman to the left in the cap appears to be Ida.

The caption written in ink below reads ‘at the Rookery, Thurning, Norfolk, 1909; John Moody from Charles’. However, if it is Ida in the picture, it can be from no later than 1907, when she died of Puerperal fever in Paris. The National Portrait Gallery holds three photographs from the series in its collection and lists them all as dating from September 1909.

On April 24th the photograph comes to auction at Sworders of Stansted Mountfitchet along with Chiaroscuro: Fragments of Autobiography, a 1952 First Edition of the artist’s life story.

John had a lifelong interest in the Romany culture and people, later becoming President of the Gypsy Lore Society, and refers to this encounter with Slade in Chiaroscuro, recording on page 66: “after an unprofitable stay at Palling we moved northwards to pull in at last at the home of friend, Charles Slade”.

In his celebrated biography of the artist, Michael Holroyd talks of Slade rescuing the travellers and bringing them back to his farm before taking the series of photographs.

The lot also includes a signed autographed letter from Augustus John to Mr Moody, on ‘Fryern Court, Fordingbridge’ headed paper, dated May 6, 1950, thanking him for the photographs: “I am quite delighted to have them – A reproduction will be most suitable in an Autobiography I’m at work on”, he writes. It is accompanied by the original stamped envelope addressed in ink in Augustus John’s hand.

“This is more than just a snapshot of times gone by,” said Sworders’ specialist Frank Barnett. “It captures the artist when he was already a well-established name and at his Bohemian peak.

“It is intriguing because the records clearly state that the scene is from 1909, but the resemblance to Ida of the woman standing on the left is striking and yet, if it is of that date, it cannot be her. Either way, it remains a stunning historical document as well as a beautifully captured romantic scene.”