A gold locket, one half of a pair, featuring a portrait miniature of King George IV by the celebrated artist Richard Cosway will feature in Christie’s The Exceptional Sale as part of their Classic Week. 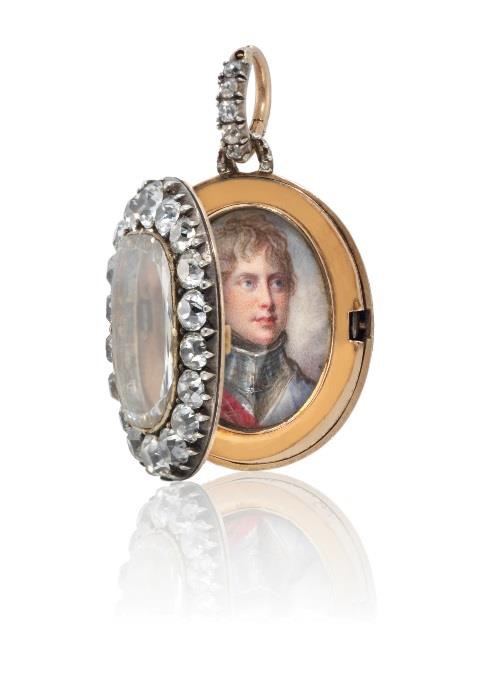 The Maria Fitzherbert Jewel is the surviving locket of the pair. The other, containing an image of the King’s secret and illegal wife, Maria Fitzherbert, was worn by the King on his deathbed and eventually buried with him at Windsor Castle.

The remaining locket, set to be sold with an estimate of £80,000 to £120,000, has passed down directly from Maria Fitzherbert and offers an important insight into this most private relationship. The pair of miniatures were each contained within diamond-set lockets and faced with sections cut from a diamond, known as a ‘portrait diamond’.

When Maria died seven years after the King she was holding a portrait miniature by Richard Cosway, possibly The Maria Fitzherbert Jewel, in her own hand. Despite the tumultuous nature of their relationship, Maria Fitzherbert is considered the only woman George IV ever truly loved and provides a rare glimpse into the love story of George IV and his beloved Maria Fitzherbert.

George IV, the then Prince of Wales, is thought to have met Maria Fitzherbert at the opera around 1780. Sensing an unwillingness to enter into a liaison with him, in 1784 the prince took the drastic decision to stab himself in the chest and, swathed in bloody bandages, told Maria that he would kill himself unless she would be his wife. She could not hold out against this moral blackmail and consented – although they both knew that their marriage would be illegal, as she was a Roman Catholic. Despite three acts of parliament preventing a legitimate marriage, the couple eventually married in a secret ceremony at Maria’s house in Mayfair in 1785.

For Maria, they were man and wife but to the world George IV was a bachelor prince with a constitutional duty to father an heir. Nine years after the secret marriage, George IV was given a powerful inducement to wed his cousin, Caroline of Brunswick and the government had undertaken to pay off his enormous debts on the day he wed. His marriage to Caroline soon came to an end and George IV and Maria were reunited but George IV’s wandering eye placed a strain on the relationship and they parted for good in 1811.

George IV was Richard Cosway’s most important patron whose favour won the artist numerous important commissions from both the Royal Family and the British aristocracy. Cosway was appointed Principal Painter to his Royal Highness the Prince of Wales in 1785 and his roles included being the artistic advisor for Carlton House and surveyor of George IV’s art collection.

Throughout his lifetime, George IV commissioned almost fifty miniatures from the artist, which he presented as gifts to members of his family and mistresses. The portraits contained within The Maria Fitzherbert Jewel and its corresponding locket were commissioned by George IV and the settings were made by the court-appointed Jewellers and Silversmiths, Rundell Bridge and Rundell.