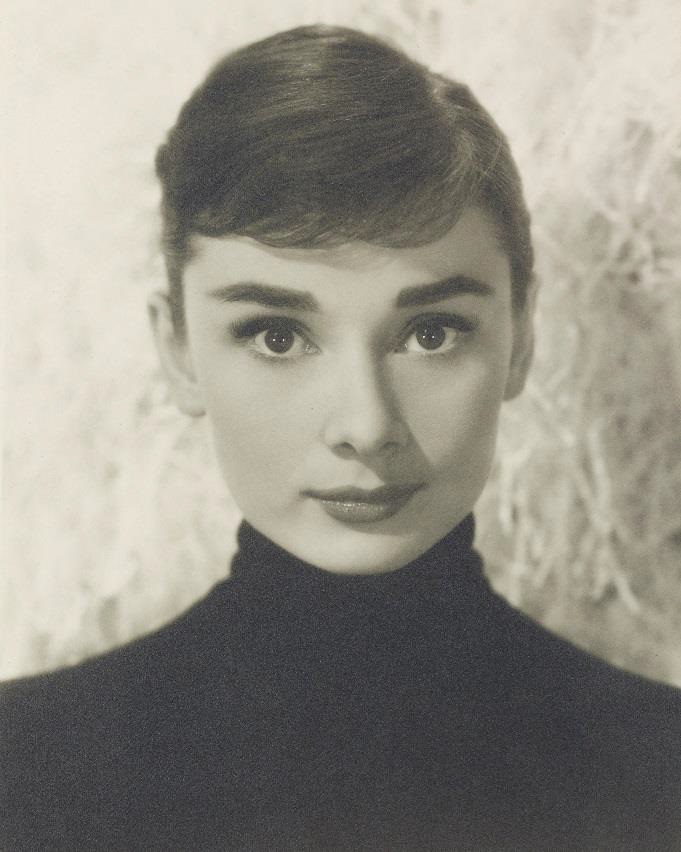 She was an international film star, celebrated stage actress, fashion icon and humanitarian, now Audrey Hepburn’s unique life’s story will be celebrated in a sale of her personal collection at Christie’s in London this September.

The collection will be showcased in a flagship auction at Christie’s King Street headquarters in London on September 27, alongside an online sale which will be open for bidding from 19 September until October 3.

The collection chronicles the life and career of arguably the most famous screen actress of the 20th Century through the lens of the objects she collected, used and loved. This is the first time these personal items, which have remained in the ownership of Audrey Hepburn’s family, have been offered for sale. The collection will be on view to the public in an exhibition at Christie’s King Street, London from September 23.

The auctions will feature Audrey Hepburn’s extensive personal wardrobe and her own annotated working copies of film scripts from her best loved films including Breakfast at Tiffany’s. The sales will also include portraits from her personal archive of original professional portraits by major photographers, the majority of which date from between 1953 and 1968 when she was at the height of her screen career, and her own collection of memorabilia and letters which offer an intimate snapshot of her extraordinary life and career. 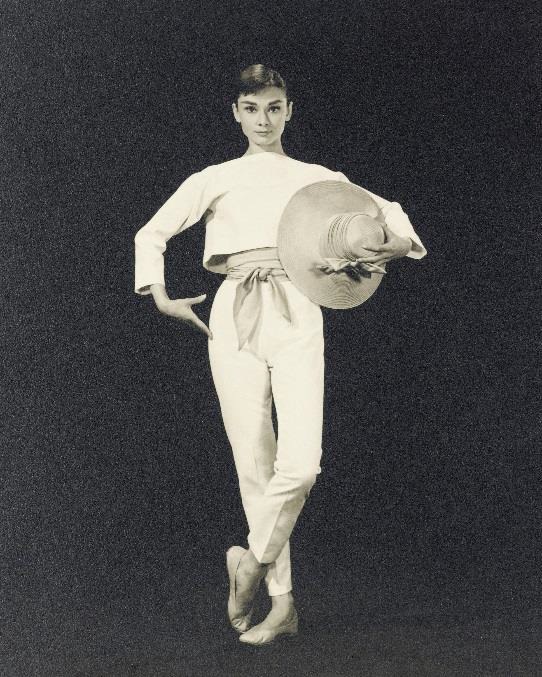 “We are thrilled to have been entrusted with the sale of items from Audrey Hepburn’s personal collection”, said Adrian Hume-Sayer, Director, Private Collections at Christie’s. “Her name is one that instantly resonates; her appeal and relevance remain as strong today as they ever were.” He continued, “The sales will offer fans and collectors alike the opportunity to acquire unique personal objects, which have never before been seen on the market and which will undoubtedly offer new insights into the remarkable life of a remarkable woman. We hope the sales will pay tribute to the timeless style of this legendary actress.”

Born in Ixelles, Brussels in 1929 as Audrey Kathleen Hepburn, she spent her childhood between Belgium, England and the Netherlands. She studied ballet and performed as a chorus girl in the West End, before travelling to the USA to star on Broadway in Gigi, quickly rising to stardom with her Academy Award winning performance in Roman Holiday in 1953.

Her talent was instantly recognised; she became the first actress to win an Academy Award, a Tony Award and a Golden Globe in the same year. Hepburn went on to win three BAFTAs and in 1994 became one of only twelve people in history to win competitive Emmy, Grammy, Academy and Tony Awards, known by the acronym EGOT.

Audrey Hepburn went on to star in some of the most iconic films in the history of the silver screen including Breakfast at Tiffany’s, My Fair Lady and Sabrina. Later in life, she devoted much of her time to UNICEF (The United Nations International Children’s Emergency Fund) and was awarded the US Presidential Medal of Freedom in recognition of her work as a UNICEF Goodwill Ambassador in December 1992. Audrey Hepburn died in 1993 at the age of 63. 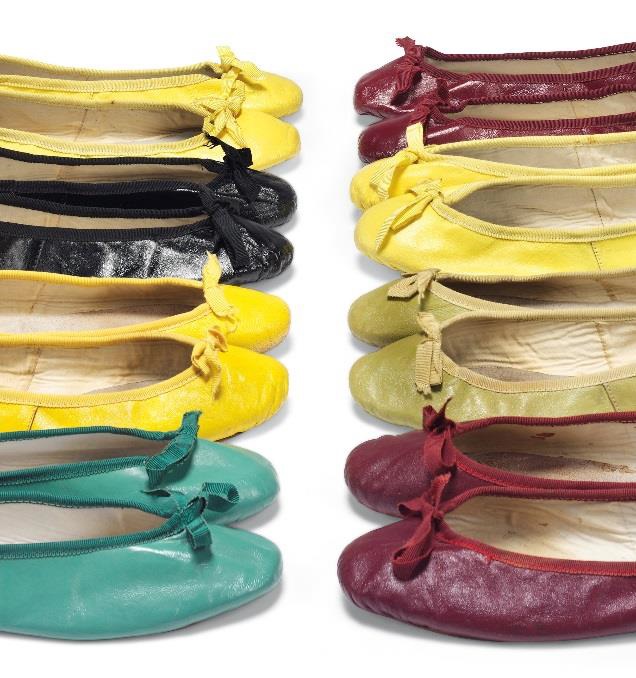 Audrey Hepburn is rightly regarded not only as one of the greatest screen actresses of all time, but as a style icon. 24 years after her death she maintains a resonance and popularity as strong today as it was during her lifetime. With estimates starting at just £100 and ranging up to £80,000, the auction will offer collectors and devoted fans from around the world an unprecedented opportunity to acquire personal items treasured by one of the most famous and well-loved women of the 20th Century.

Luca Dotti and Sean Hepburn Ferrer commented, “On January 20th, 1993 we lost our mother and best friend and the world lost an enduring symbol of grace, elegance and humanity. We preserved our feelings for her as well as all of her belongings which each signified her life’s choices and philosophy. After 25 years we have focused on those items we wished to keep as well as to pass on to future generations. In an effort to include all who partake in these feelings for her, we have selected a collection of items to share with her ever-growing base of admirers. We are honored to entrust Christie’s with this sale and it is with great joy that we wish to share her spirit, through this sale, and its related previews, with all who have enjoyed her films, her sense of style and followed her humanitarian legacy.”

The auctions will present a unique opportunity to view and acquire items from the extensive personal wardrobe of the screen star who remains a globally recognised fashion legend. Key pieces that exemplify her signature look include a Burberry trench coat (estimate: £6,000-8,000) and a selection of her ballet pumps in a rainbow of colours, with estimates from £1,500.

Audrey Hepburn was associated with the celebrated couturier Hubert de Givenchy who was first hired at her suggestion to design the actress’s wardrobe for her second Hollywood film, Sabrina. The two became close friends and frequently collaborated, Givenchy went on to design Hepburn’s costumes for Love in the Afternoon, Funny Face, Breakfast at Tiffany’s, Paris When It Sizzles and How to Steal a Million. Hepburn often wore clothes designed by Givenchy in her private life as well as on screen.

A highlight of the sales is a blue satin Givenchy cocktail dress; worn by Hepburn, this model featured in a photo shoot photographed by William Klein for a fashion editorial promoting Two for the Road in 1966 (estimate: £10,000-15,000). The elegant gown is trimmed with blue satin fringes and epitomises the deceptively simple style for which Hubert de Givenchy and Audrey Hepburn are justly famous. 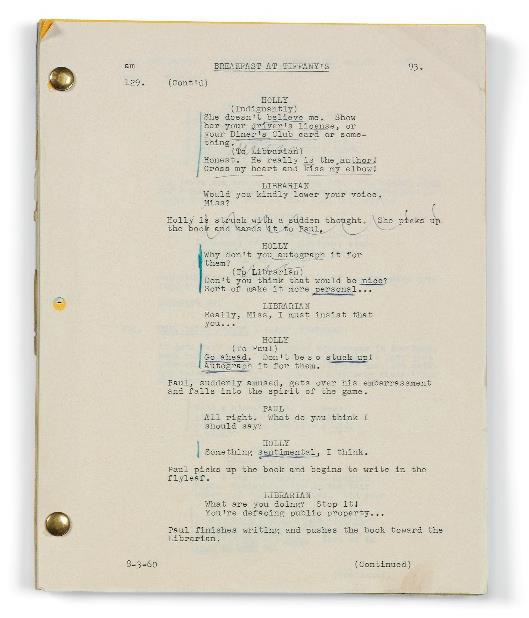 Audrey Hepburn is one of few actresses to have won Academy, Emmy, Grammy and Tony Awards. The auctions will include Hepburn’s personal annotated working scripts from her best-loved films, including Breakfast at Tiffany’s (estimate: £60,000-80,000) and Charade (estimate: £15,000-25,000). Hepburn often used turquoise ink to make notes and revisions for her portrayal of some of Hollywood’s most memorable characters.

Further highlights include a letter from Truman Capote in which he expresses his pleasure that Hepburn had taken on the now iconic role of Holly Golightly in the screen adaptation of his 1958 novella Breakfast at Tiffany’s (estimate: £4,000-6,000); and a gold lighter engraved ‘For My Fair Lady, Gene Allen, December 1963’, a gift from the Art Director of the 1964 film (estimate: £3,000-5,000). 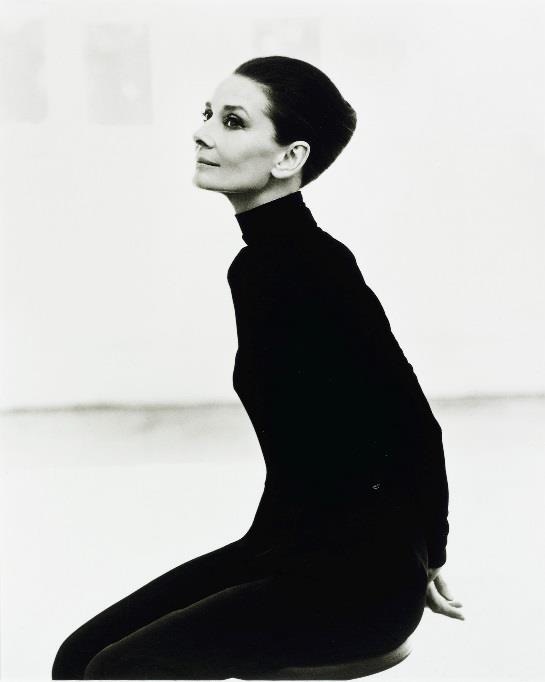