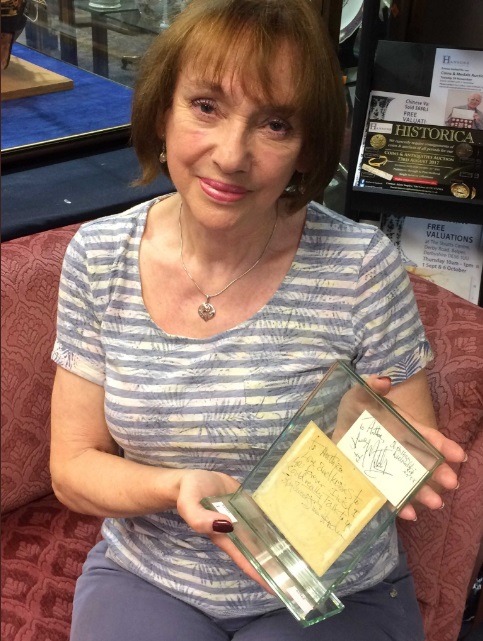 A note scribbled by late guitar legend Jimi Hendrix rock star to a female fan in 1967 has sold for £5300 at Derbyshire auctioneers, Hansons.

The note was given to music fan Anthea Connell, 69, by the rock legend in the sixties when the guitarist was playing a gig at The Starlight Room in The Boston Gilderdrome in Lincolnshire. Hendricks appears to have taken something of a shine to the young fan back in March 1967, leaping off the stage to speak to her and then writing on a packet of guitar strings: ‘To Anthea, Love and kisses to you forever. I wish I could really talk to you. Stay Sweet, Jimi Hendrix.‘

The sale attracted media attention from around the world for the retired mother-of-two, who said, “Apart from meeting Jimi in person, way back in 1967, I can’t think of anything more exciting, exhilarating, exhausting or nerve-wracking than the attention I received from the media when the news was released that I was about to auction his autograph.”

The note, which also came with autographs from Noel Redding and Mitch Mitchell, fellow members of the Jimi Hendrix Experience, had carried a pre-sale estimate of £2,000 to £3,000.