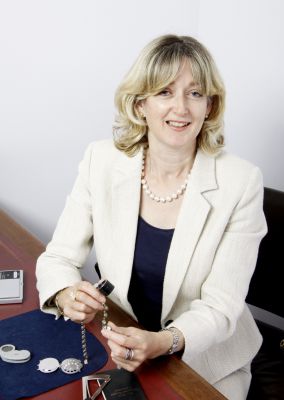 We asked Frances Noble, Head of the Jewellery Department at Mayfair Auctioneers Dix Noonan Webb to choose her five favourite lots in their upcoming Jewellery sale on November 29 and explain what makes them the ‘ones to watch’ in today’s market.

Frances said: “With the huge choice of jewellery on the auction market, particularly towards Christmas, the decision as to what is a good ‘buy’ can be somewhat overwhelming. Here are my five recommendations from our Jewellery sale”. 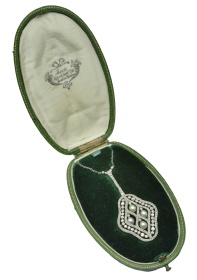 Jewels by top makers are extremely sought after on the present market, even more so than in the past. We have a beautiful early 20th century pearl and diamond pendant, converting to a brooch, by the highly desirable German makers, Robert and Louis Koch.

Founded in Frankfurt in 1879, the firm gained the title of ‘Jeweller of the Court’ and by the end of the century were supplying jewels to the German Imperial family, the Russian Czar and other European royals and aristocrats.

Famous for their Belle Epoque jewellery, this example is a perfect example of their exquisite craftsmanship, designed as a lattice of diamond and pearls, mounted in platinum and gold, and contained in a fitted and signed case, with the original brooch fittings and tiny screw driver needed to convert the piece from a pendant to a brooch. A rare example from this jewel house that is sure to attract attention at the sale.

With the jewellery of the 1960s and 70s now very much in vogue, and the current market seeing recent high prices for pieces by designers such as Andrew Grima and John Donald, this necklace and ring ensuite, made in 1969 by the designer Tom Scott, deserves attention.

Scott worked with Grima for many years, being responsible for creating Grima’s designs and bringing them to life. A highly talented designer in his own right, this striking example, comprising a diamond and citrine set collar necklace and detachable pendant that can also be worn separately as a brooch, together with a matching ring, illustrates Scott’s skill at three dimensional forms.

The allure of the peacock

Perhaps the prettiest piece in the sale has to be the gorgeous late 19th-century Indian gemset peacock ‘aigrette’ or turban ornament – designed as a peacock with wings outstretched and tail fanned, set throughout with emeralds, rubies and pearls, the head and neck of the bird highlighted in green and blue enamels.

Probably made in India for the Western market, the peacock, a native bird of India, has long been associated with the cultures of Indian and the Far East, symbolising royalty and power.

From the 1860s, through to the early 20th century, European fashion encompassed ornate hair ornaments for evening wear, emulating the Indian turban ornaments ‘sarpech/jigha’, and known in Europe by the French term of ‘aigrette’. A beautiful example of this fashionable jewel, in lovely condition.

Fine sapphires from sought after regions such as Sri Lanka, are high on the list of best sellers at present. This beautiful colour change sapphire of violet/blue, is an untreated sapphire of Sri Lankan origin, weighing 7.1 carats, with an attractive colour change, evident when viewed under different lighting conditions. A stunning stone of fine and unusual colouring and good even colour saturation, which has to be high on my list of favourites.

My final choice is an elegant French hardstone cameo brooch, circa 1820s-50s, finely carved in high relief to depict the head and shoulders of a young lady, possibly Clytia, after the Greek water nymph, her hair plaited and with loose ringlets cascading below. The cameo is signed ‘BASSOT’, and mounted as a brooch. There does not appear to be much information available about this maker, but a jeweller from Paris called LÉON BASSOT is recorded by the French author Henri Vever in his book ‘French Jewellery of the Nineteenth Century’, the original published in France 1906-1908. Beautifully carved with a sculptural quality, the piece exudes quality.

* all prices plus 20% Buyers Premium)