A royal piano that once belonged to Queen Victoria and left Buckingham Palace over 125 years ago has come onto the global collectors’ market.

In the late 19th century, John Broadwood & Sons was the leading piano maker in Britain. For the Queen’s Golden Jubilee, the company delivered one of its finest rosewood boudoir grands – model number 22,204, to Buckingham Palace on 11th November 1887 for the Queen’s personal use. The Queen was to use it for the next five years. 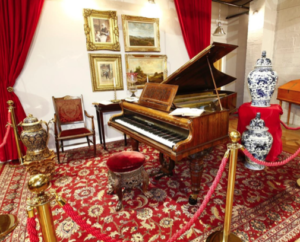 Later, following royal custom, the piano was given to her former lady in waiting, a Mrs F Boston, on the occasion of her marriage.

Alongside its royal connections, the instrument was at the heart of a lifelong – and for the time – scandalous love affair between Eugenie Schumann, seventh daughter of Robert and Clara Schumann and Marie Fillunger, a renowned international soprano.

The piano was hired in the name of Miss Fillunger but it was Eugenie who played it for several seasons in London while living together with her sweetheart in Kensington. Famously, the Queen refused to believe such relationships were even possible, yet the two women were so devoted to one another that they chose to be buried together at the Gsteig cemetery in Interlaken, Switzerland.

Eight years ago a couple from Oxfordshire found the piano neglected in the aisle of a local church, having been used for decades for choir practice and amateur recitals. In 2012, the owners embarked on an extensive project of restoration and research lasting over a year.

Stephen Pringle, founder of Sherwood Phoenix, the antique piano specialists, handling the sale, said, “This piano is such a one-off – with such an incredible provenance – that it is actually quite difficult to put a value on it. Objects with similar provenance have attracted serious money. In 2009, Harrods was offering Queen Victoria’s billiard table for £1.2m, whereas even her undergarments made £16,250 at a Christies auction in 2016.” He added, “I can see this piano going to a modern day royal family, serious collector, or, perhaps, a great female performer on the international concert circuit.”

The piano for sale is an exceptionally fine example of a model 13B boudoir grand in a rosewood case with turned and carved feet, a decorative lyre, scrolled music desk and solid brass fittings throughout.