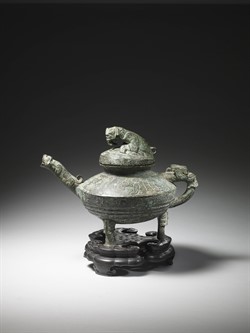 A rare and sacred Chinese bronze water vessel, made up to 3,500 years ago and taken by British troops from the emperor’s Summer Palace in 1860, has been unearthed in a Kent house.

With just six similar archaic vessels, known as Ying, in existence, of which five are in museums, the discovery of a seventh has led to auctioneers The Canterbury Auction Galleries giving the item an estimate of £120,000 to £200,000 in their sale next month.

The vessel was found with three other bronze works of art from the Qing Dynasty. Alongside them was a family archive of letters and photographs relating the military history of the Evans family of Fronfelen, Monmouthshire.

The items were found by dealer and saleroom consultant Alastair Gibson, who commented, “When I was asked to view a small collection of Chinese bronzes in this unassuming house, I didn’t imagine the door would open to a 1860’s time capsule and the last thing I expected to find was this remarkable bronze.”

He continued, “Whilst the three later works of art have comparables in the market today, the Tiger Ying 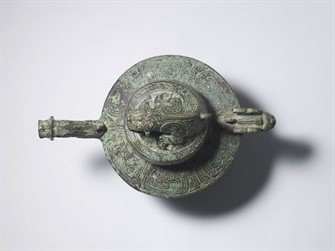 does not. Only one Ying has ever been offered at auction before and none of the five others known is modelled with what in Chinese art is considered the king among beasts and the most powerful animal for warding of evil.”

Hajni Elias, a Chinese art and cultural historian who helped research the Tiger Ying, described it as “special and unequalled”.

She added, “We cannot underestimate the wealth and sophistication of the late Zhou culture that created such an outstanding bronze vessel. Only men of high status, such as a king, his nobles and officials were able to obtain them. Any type of bronze vessel was immediate indication of a person’s relationship with the ruler and an index to his influence and status in society.

“They represent some of the finest vessels extant and thus are treasured by collectors and connoisseurs worldwide.”

About the Tiger Ying vessel

Dating from the Western Zhou dynasty (1027-771 BC), the vessel has been christened the ‘Tiger Ying’ because the spout and cover (lid) are each cast with models of the creature.

The vessel would have been used for cleansing the hands and face at rituals and ceremonies conducted to pay respect to a person’s lineage and ancestors. Examples have been found in burial tombs.

The casting of not one but two tiger forms is imaginative and rare. One in a highly stylised form on the spout creates an image of a beast that is ready to leap out when pouring water from the vessel, while the other, cast in a more natural shape of a crouching beast, forms the handle of the cover.