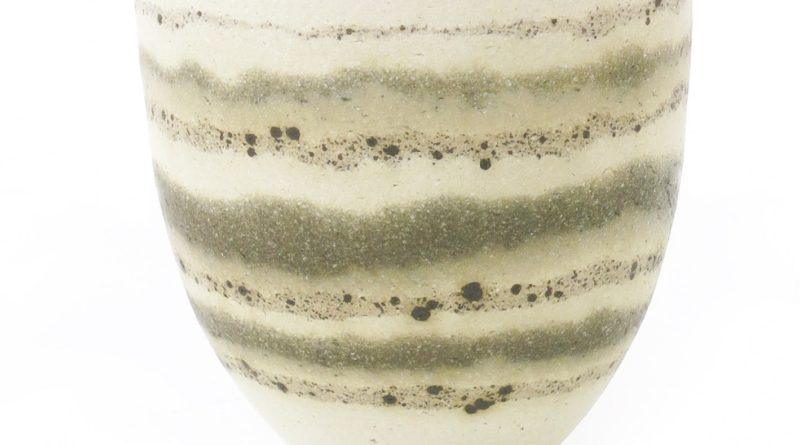 With demand for collecting 20th-century studio pottery continuing to be strong, devotees can grow their collections by looking beyond leading lights such as Lucie Rie and Hans Coper to find other unsung practitioners reflecting the evolution of the genre.

During the 1930s, Staite Murray’s pottery made in his studio was considered on a par with that of Bernard Leach and Michael Cardew and his stoneware was exhibited alongside paintings by Ben Nicholson and sculpture by Barbara Hepworth and Henry Moore.

Shortly before the war he moved to America and ceased to pot. William Staite Murray’s work faded from the public eye and had become very much overshadowed by the prominence of Bernard Leach.

Now collectors of studio pottery are again beginning to appreciate the early modernist aspects of his work, which was titled and treated as works of art made of ceramic.

His work has recently been exhibited at Dulwich Picture Gallery alongside modern British artists.

With his figural stoneware pieces, John Maltby crosses the boundary of sculptor and potter.

Born in 1936, he studied sculpture at Leicester and Goldsmith’s college before working with David Leach at his Bovey Tracey pottery between 1962-64 when he set up his own pottery studio and workshop.

His pottery has broad influences from both Eastern and Western culture and, from the 1960s to today, his work has had several changes in appearance. These variations chart his sculptural approach, even on domestic items such as cups or a vase.

Describing his recent sculptural work, Maltby said, “The constraints of function are no longer present and I feel newly liberated from some of the limitations of the ceramic tradition.”

Even in his eighties, Maltby remains a prolific artist producing several one-man shows a year. His studio pottery, particularly the large early sculptural vases, and the more recent larger figural sculptures, is held in high regard by collectors, who have witnessed rising prices over the last 10 years.

His work is hand-coiled stoneware, which forms architectural vases and bowls decorated with a monochromatic matt glaze.

Influences range from ancient Egyptian, Chinese and Cypriot pots, to the more contemporary work and aesthetics of Lucie Rie and Hans Coper.

Demand for his studio pottery has seen prices rise rapidly in value over the last five years with pots regularly being contested to the £5,000 to £10,000 bracket. At the forefront of his work is a series of large pots glazed with black and white geometric panels.

A recent example of the rising prices for his work comes in the sale of a rounded pot, glazed in black and white, with a with collar rim, which was bought for £400 in Bonhams in 2001. Earlier this year, the same pot fetched £12,000 following a heated bidding war.

Jennifer Lee was born in Aberdeenshire and studied ceramics and tapestry at Edinburgh School of Art between 1975 and 1979, before moving to the Royal College of Art, London, from 1980 to 1983.

The techniques she uses in her studio pottery includes adding colour via metallic oxides to the clay before hand-building her architectural pots.

Her work was exhibited at Galerie Besson in 1988 – the opening year of this historically-important gallery run by Anita Besson. Galerie Besson put UK artists’ work on an international standing and treated the ceramic form as much as a work of art as other genres.

Lee’s pots have been described as “weightless” – an expression of movement and stillness. They have an elegance which links the simplistic forms of a Lucie Rie bowl and the standing sculptural form of a Hans Coper vase.

They work individually and also as part of a series of works in a collection of studio pottery.

Hans Coper (1920-1981) and Lucie Rie (1902-1995) are the acknowledged masters of 20th-century studio pottery with their work continuing to be highly prized and sought by collectors all over the world. These wartime refugees quickly emerged as the leading figures in post-war studio ceramics.

Lucie Rie had trained and worked at the Weiner Werkstatte in Vienna, making simple brown pots before arriving in England. She continued to explore simplicity of form and simple monochromatic glazes such as the stunning green glazed porcelain bowl with running bronze rim.

Coper, who trained with Rie, produced a range of vases, more sculptural than functional.

Where to see British Studio Pottery

The Centre of Ceramic Art (CoCA), part of York Museums Trust, has one of the largest and most important collections of British studio ceramics in the country, made up of 5,500 pieces from more than 600 artists.

The collection is based on the acquisitions of three men. The Very Reverend Eric Milner-White, Dean of York, who left his collection of studio pottery to York Art Gallery in the 1950s; W.A Ismay, a prolific collector of post-war British studio ceramics, who left his sizeable collection to York Museum in 2001; and Anthony Shaw who began collecting in the 1970s and after meeting artists Gordon Baldwin and Ewen Henderson.

Ismay, a librarian, used his modest wage and later his pension to build a collection of over 3,500 pots, living surrounded by them in his small terraced house. His collection contains important groups of works by Michael Cardew, Hans Coper, Lucie Rie, Bernard Leach and many others.

In 2009 Henry Rothschild gave York Art Gallery a group of ceramics from his personal collection which included works by Lucie Rie, Ian Godfrey and Beate Kuhn.

Anthony Shaw’s collection includes work by Baldwin and Henderson, as well as Gillian Lowndes, Sara Radstone, Ian Godfrey, Bryan Illsley and a collection of more than 550 buttons by Lucie Rie.