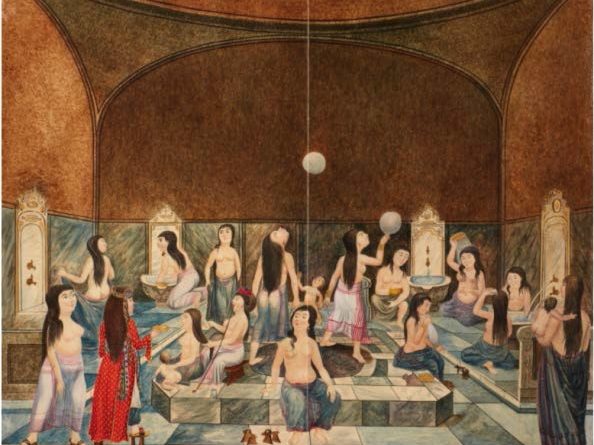 Sotheby’s is to host its Arts of the Islamic World auction later this month, with over 200 works of art produced under the aegis of multiple Islamic Empires over a period of 1,200 years and across three continents.

The sale is set to feature a host of prominent works and rare pieces from private collections. Some of the key highlights of the sale include: 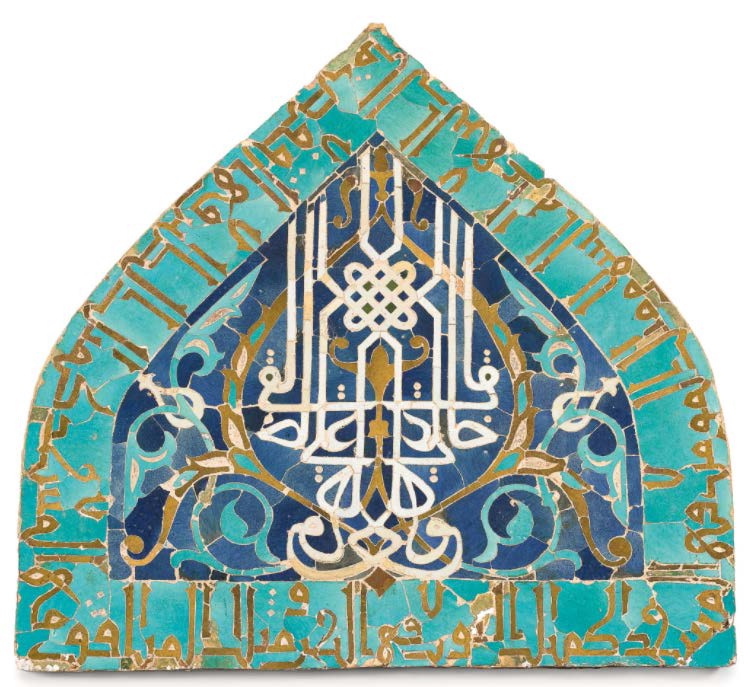 Of monumental scale, superlative quality and impeccable provenance, the sale presents five rare examples of cut-mosaic tilework from the Timurid empire of the fourteenth/fifteenth century. Rediscovered in an attic in France in 1973, these tiles are listed as the first item on Pridonoff’s daughter’s marriage contract dated 28 July 1944. From there, they can be traced back to the eclectic and engaging collection of her father, Mnavzagan Pridonoff, who escaped the Russian Revolution and moved to France from Tiblisi in 1917.

A monumental Timurid cut tile mosaic mihrab panel, Central Asia or Persia, 14th-15th century (est. £80,000-120,000)
With a distinctive palette of blue and turquoise cut-glazed tiles into which white and ochre inscriptions are laid, this panel even features a mirrored form of calligraphy at its centre. The fluid inscription reads: ‘The believer in the mosque is like a fish in water and the heretic in the mosque is like a bird in the cage’. 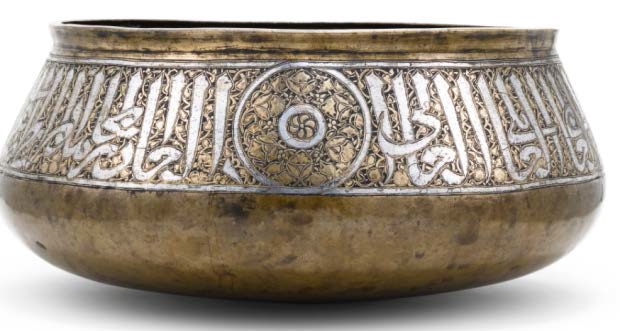 A fine Mamluk silver-inlaid cast brass bowl, Egypt or Syria, first half 14th century (est. £60,000-80,000)
An exceptional example of Mamluk metalwork, this elegant bowl is emblazoned with forumalic inscriptions and blessings, and the organic floral details typical of Mamluk art and architecture.

Thought to have been comissioned by a high-ranking offier at the Mamluk court, it was formerly in the collection of Aton Exner, an Austrian publisher who donated a collection of over two thousand works to the Museum of Applied Arts in Vienna in 1948. 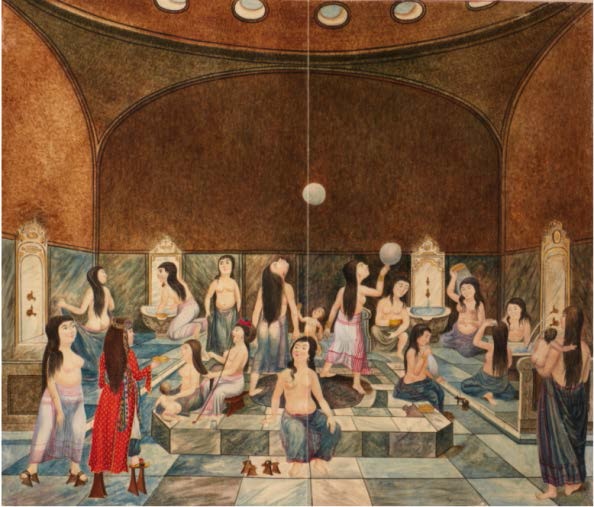 A collection of fanciful reminiscences of the adventures and romances of an inquisitive man – summed up by a free translation of the title ‘A Shaykh remembers his youth’ – this Ottoman manuscript is illustrated by 85 miniatures uniquely copied on vellum.

Ottoman society was fairly permissive in the sixteenth century, more conservative in the seventeenth and quite liberal in the eighteenth – and so manuscripts produced in this last period show vibrant and explicit scenes. Indeed, it was a rather common genre in the literature of the time. This text is a curated compendium of several manuals using incredibly expensive materials and a number of artists from different ateliers. It is also important to note that gender was not considered a dichotomy in Ottoman Turkey, and there a multiple examples of the heterosexual and homosexual. 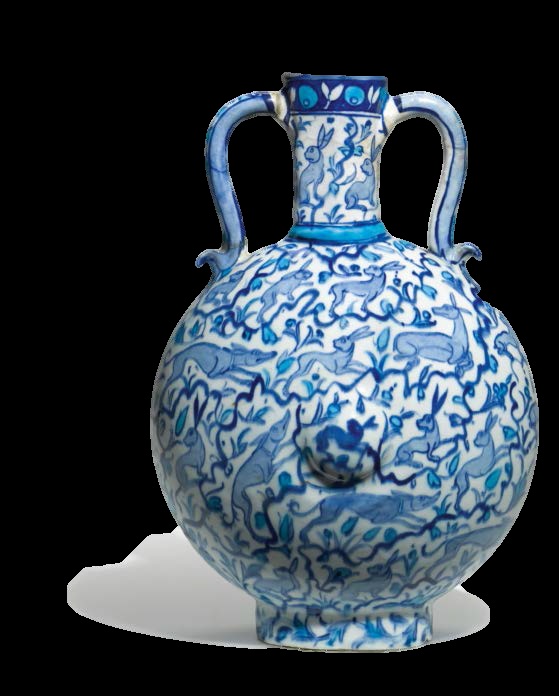 Bearing testimony to the breadth of experimentation of Iznik potters, this unique blue and white flask is the only known example of this distinctive shape. The elegance of the contours and playfulness of the design hail from varying traditions that have evolved and come together in this ground-breaking piece. Decorated in the early blue and turquoise of the mid-sixteenth century and adorned with a fantastical mix of animals, it is one of the earliest instances in which this popular design first appeared.

The origin of this form can be traced back to pilgrimages in pre-Islamic times, associated with Middle Bronze age pottery vessels and the use of natural materials such as animal-skin gourdes. This example portrays the unmistakeable desire of the potter to create an organic form matching the leather prototypes – a difficult feat that is achieved in the accentuated curvature of the body.

Iznik wares are best-known for their creative floral designs, blending the Ottomans’ most loved flowers, yet animals were also favoured as a decorative motif. Although these painterly forms recall the ‘animal chase’ tradition seen on Persian metalwork, alluding to the courtly pastime of the hunt, this style is likely to have been derived from the Balkans. Balkan silverwork was popular during the reigns of Ahmed I, Osman II and Murad IV.

The closest comparisons to this Iznik flask are also the only known examples of their kind – a glass pilgrim bottle from the Mamluk era held in the British Museum and a metalwork silver-inlaid canteen attributed to mid-thirteenth century Syria, in the Smithsonian Institute. 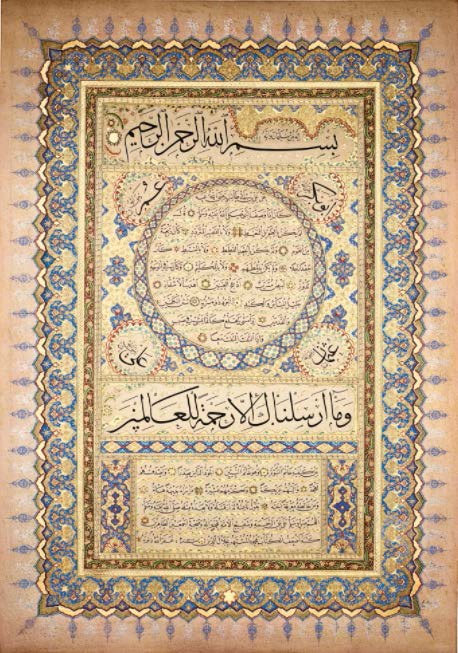 A perfect example of the specific genre of Ottoman Turkish literature that denoted a physicial description of the Prophet based on hadith accounts, this Hilye is signed by the eminent Ottoman calligrapher Mahmud Celaleddin. Althought thought to be self-taught, he devloped a distinctive style that was much admired by Sultan Abdülmecid (r.1839-61) and used for the inscription inside the foundation of the revered Eyüp Sultan Mosque in Istanbul.

The auction offers three highly important medieval manuscripts on astronomy, maths and medicine of the utmost rarity, giving an insight into the scientific advances developed and practised during the Islamic Golden Age. Owing to the medieval Arabic scientific tradition, many Greek texts have been preserved and transmitted to future generations through the centuries. These three early works were copied in the twelfth and thirteenth centuries in North Africa and Persia, and bear witness to this important phase of conveying Classical knowledge. 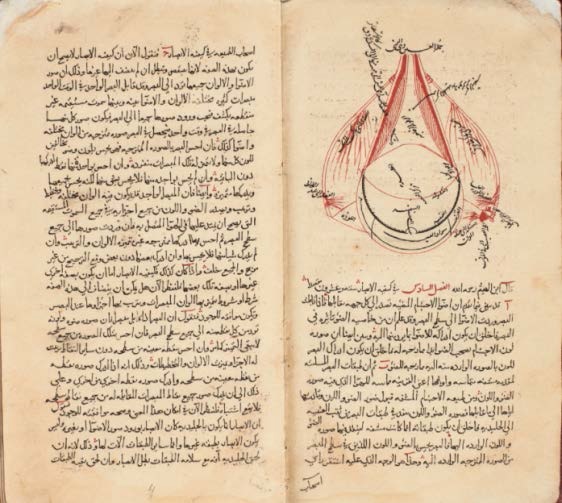 Kamal al-Din al-Hasan ibn ‘Ali ibn al-Hasan al-Farisi, ‘The Book of Correction of Optics for those who have Sight and Mind‘, autograph copy, Persia, probably Tabriz, dated 708 AH/1309 AD. (est. £250,000-350,000). This early autograph copy of Al-Farisi’s landmark work is of exceptional historical importance, drawing on the work Greek scholars Euclid, Ptolemy, Aristotle and Galen, and covers various elements of optics, the physics of the eye, as well as light, vision, reflection, refraction. A remarkable cross-sectional diagram may be the earliest known illustration of the human eye.

An important Arabic translation of Euclid’s elements, probably Egypt, 13th century (est. £200,000-300,000)
The ‘Elements’ by Euclid is considered one of the pillars of mathematics. This finely written copy is densely illustrated with finely-executed diagrams and marginal notes, combining elegant naskh for the main text and thuluth for the titles.
Majisti batlamiyus al-taʿalimi fi l-taʿalim, an early abridgement of Ptolemy’s Almagest, Persia, dated 671 AH/1272 AD (est. £200,000-300,000).

Ptolemy’s Almagest was the most influential text on astronomy for 1,500 years until Copernicus’ tome, and this unique manuscript contains the only known copy of an abridgement from Thabit b. Qurra’s seemingly lost translation. The Greek original was first translated into Arabic, by the order of the Caliph al-Ma’mun during the first half of the ninth century, before it was then translated into Latin.

Arts of the Qur’an

Qur’an stands worked from jade and other hardstones are extremely rare, with many examples held in museum collections. Designed to hold large Qur’ans, the legs are designed as lobed archways reminiscent of Mughal architecture.

A rare and finely decorated Qur’an leaf in eastern Kufic script, Persia or Central Asia, circa 1075-1125 AD (est. £220,000-280,000)
This extremely rare folio is an example of one of the most striking and beautiful Qur’anic scripts, originating from a Qur’an of majestic elegance and breath-taking graphic power. The floral decoration of the background of the entire text area throughout the manuscript marks it out as one of the most luxuriously decorated Qur’ans of the medieval period. The calligraphic display is characterised by acute angularity and an almost ethereal attenuation – combining elegance, energy, originality and immensely skilful execution. The original manuscript was produced in thirty volumes, each containing around seventy-five leaves, giving a total of approximately 2,250 leaves.
Other leaves from this dispersed Qur’an are held in the collections of museums worldwide including The Metropolitan Museum of Art, New York, Topkapi Saray Library, Istanbul, the Aga Khan Museum Collection and the Cleveland Museum of Art.

An illuminated Qur’an juz, attributable to the scribe ‘Ali ibn Muhammad al-Muktib al-Ashrafi, probably illuminated by Ibrahim al-Amidi, Egypt, Mamluk, circa 1370-75 AD (est. £80,000-120,000)
This lavishly-illuminated juz comes from an important Qur’an commissioned by Sultan Sha’ban (r.1363-76) and was endowed to the Ashrafiyyah foundation – with its other sections now the British Library, Chester Beatty Library and Tareq Rajab Museum. With an elegant and fine style, it is an example of the apex of Mamluk Qur’an production in Cairo in the second half of the fourteenth century. 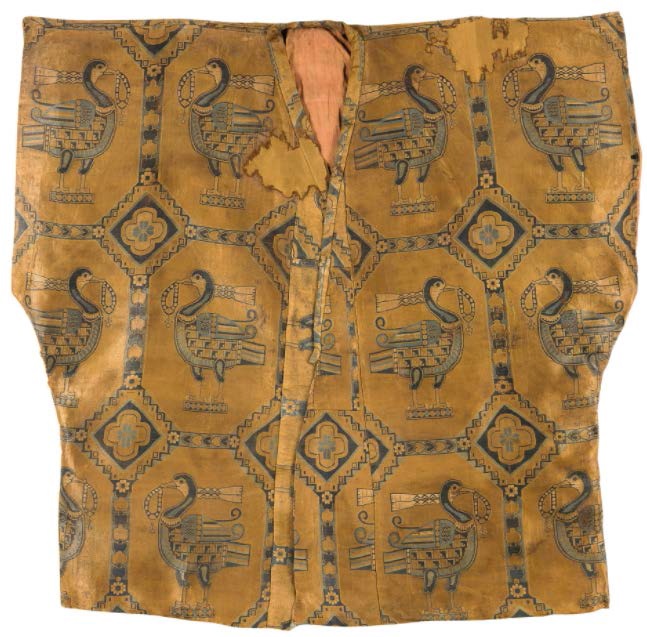 An exceptional silk samite shirt with ducks, Central Asia, Sogdiana, 7th-9th century (est. £300,000-500,000)
In superb condition, this magnificent shirt, characterised by its rich honey-gold ground offset with designs in shades of blue, would have been considered a true ‘cloth of gold’ –prized by the Sogdian elite and its neighbours. An indicator of wealth and rank, this shirt would have served an important function in the context of trade and diplomacy. Today, it provides a rare glimpse into an important civilization that left an imprint on empires spreading over multiple continents and for many subsequent centuries.

Set within the mountainous plains comprising modern-day Uzbekistan and Tajikistan, the Sogdian Empire was at the centre of an extensive trade network of musk, silverware and silk. The best silks came from China, and the Sogdians, lying at the centre of various crossroads, not only developed routes along the Silk Road but also with the Persian market – hence the strong influence of Iranian motifs in the design.

Adorned with facing ducks each wearing a flowing scarf and holding a pearl necklace, the remarkable condition of the shirt one thousand years later is testament to the use of the highest quality silk. It is one of very few examples in this state of preservation to exist, with notable examples held in international museums.

The sale takes place on April 25.